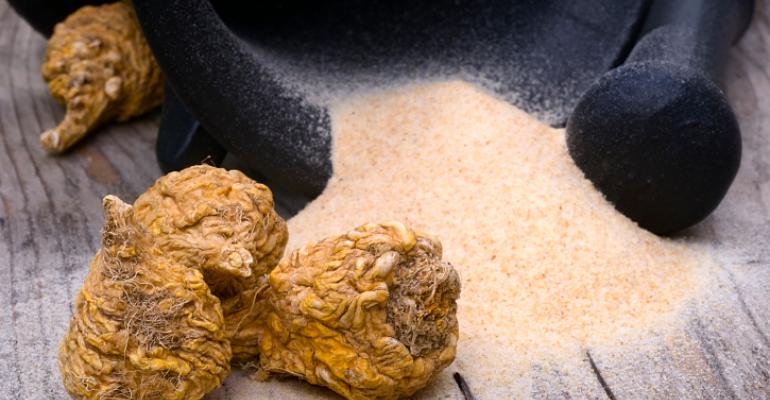 Everything good, bad and profitable in the natural products world can be found in this botanical.

Want a view into how the global ingredients world works? A perfect anecdote lies in the blockbuster botanical maca.

It’s got exotic and traditional uses, supply-chain developments and abuse, sudden blockbuster status in the States and elsewhere, China entering to dominate the market, price spikes and adulteration, advanced testing and a few quality-conscious players fighting a tide of economically motivated abuse. If the story of maca were a song, it’d be “Lawyers, guns and money.”

Traditionally grown high in the Andes Mountains of Peru at elevations between 13,000 and 15,000 feet, maca is a tuber that has been a valuable protein source amongst highlands Peruvians—and also used for its sexual enhancement and fertility benefits.

“Maca is one of those remarkable feel-good superfoods,” says medicine hunter Chris Kilham, who does work for ingredient supplier Naturex and has taken two maca expeditions to Peru in the last year. “When you take it, you feel it, and you like the way you feel. Any time you boost energy, especially other than central nervous system stimulation, people feel good.”

Kilham says he brought maca to international markets in 1998 through his work with Pure World (acquired in 2005 by Naturex). U.S. finished product company Navitas Naturals has been the category leader since it introduced maca into the U.S. market in 2003, and provides Peruvian maca as both a raw powder and as a gelatinized powder. Such early adopters established righteous relationships with farmers—visiting them in Peru, establishing growing agreements, even inviting them back to the U.S. to further cement business relationships. 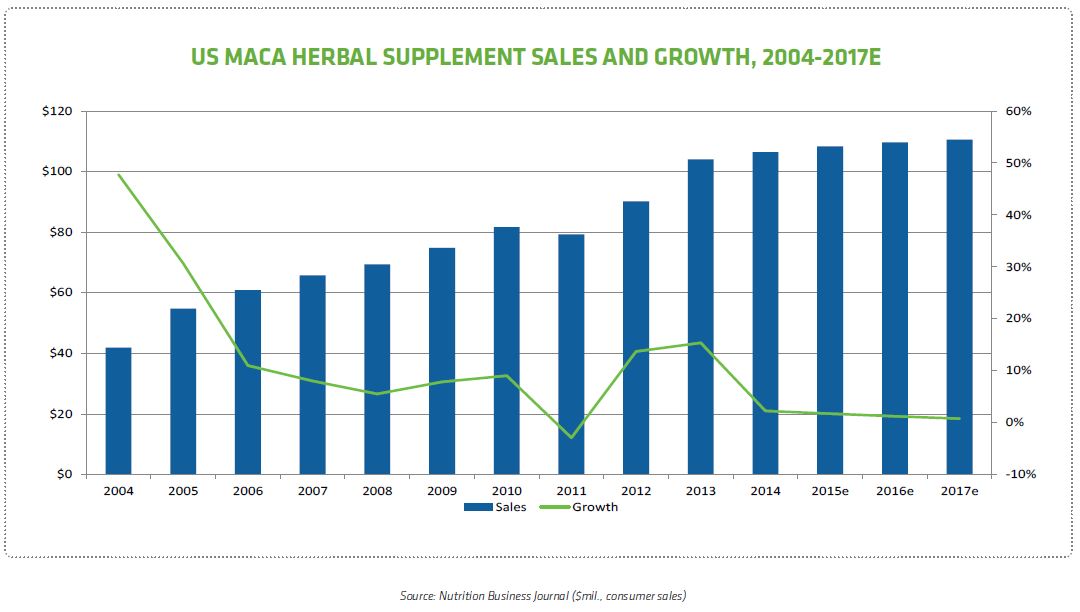 The trade infrastructure was immediately established—dedicated land, adequate seed, large-scale cultivation, some mechanization because the Andes Mountains make it difficult to reap and sow by hand, teams of people to harvest, money to hire, proper protocols established for cleaning and drying, warehousing and storage.

Kilham says neighboring Bolivia is a ripe candidate for maca production but lacks much of that trade infrastructure.

Two years ago, with visions of profits (and sexual prowess) dancing in their heads, the Chinese decided to move into the maca trade. They did it the old-fashioned way: with suitcases full of cash. Literally.

A year ago, when the price of maca went from 14 Soles (the exchange rate is roughly 3 Soles to the dollar) per kilo to as much as 10 times that amount, Kilham was in the Peruvian highlands, and observed, “It’s a real mess up here. We passed a Chinese pistolero with a 9mm on his hip. You’re not supposed to walk around in public with a gun visible.”

The Chinese came in not just to export maca with money being no apparent object, but they also allegedly took maca root out of the country to bring back home in order to start their own domestic maca industry—a violation of Peruvian law.

“We’ve never seen anything like it,” says Todd King, vice president of marketing at Gaia Herbs, which utilizes a suite of testing protocols from HPLC to DNA in order to validate the quality of the maca they acquire. “We did raise our price last year because of cost. This year, one reason supply came back is because Peruvian farmers planted more maca because of demand. And that Peruvian demand from the Chinese is not happening because they’re growing in China.”

Companies like Navitas Naturals have also had to come to terms with escalating raw material prices and the choices to make.

“As availability of the heritage crop tightens and prices rise, companies face a tradeoff: Keep prices stable but lower standards, or increase prices but maintain high standards,” says Zach Adelman, founder and CEO of Navitas Naturals. “The market is already seeing an influx of lower-priced products containing adulterated, less-potent maca. We have adapted to the new marketplace conditions by introducing a smaller size of maca so consumers can get the quality they expect at a price they can afford.”

Today, China has burgeoning maca acreageâ€“perhaps twice the total in the Peruvian maca landsâ€“originally in pesticide-laden Yunnan Province, but more recently in clean Tibetan highlands that more closely approximate the high elevation, dry climate and clean environment of Peru (though not Peruâ€™s legendary volcanic soil, which some assert accounts for a crucial difference in maca physiological benefit).

Today, China has burgeoning maca acreage–perhaps twice the total in the Peruvian maca lands–originally in pesticide-laden Yunnan Province, but more recently in clean Tibetan highlands that more closely approximate the high elevation, dry climate and clean environment of Peru (though not Peru’s legendary volcanic soil, which some assert accounts for a crucial difference in maca physiological benefit).

“The Chinese moving maca to Tibet is smart and proper,” says Kilham. “The Chinese know what they’re doing when they go after something. The Chinese have gone to town on maca cultivation. It’s fair to say they are the world leaders in maca production regardless of the tradition derived from the Andes. When you can’t grow it at high altitude, by necessity you use agrotoxins—so it’s not just a matter of less quality but there’s also the chemical accumulation standpoint.”

The good, the bad and the adulterated

Kilham says Naturex tests both for active phytochemicals in maca that give it its human benefit as well as for bacteria and yeast, heavy metals and mold.

“There are of course loads of companies that can’t do that,” says Kilham. “They don’t have the facilities to do that kind of monitoring. Will we see more maca mixed with millet powder? Probably. Overall, I think you can’t find a popular item in the natural products market that hasn’t been copied, adulterated, and hasn’t been deliberately exchanged for something else. This is the legacy for our industry. It really doesn’t matter what the ingredient is.”

That’s why botanical industry initiatives around adulteration are both revolutionary and can change the quality of most of the botanical business. On the .org side of the ledger, the botanical adulterants program spearheaded by the American Botanical Council, American Herbal Phamacopoeia and University of Mississippi’s National Center for Natural Products Research is making inroads into educating quality-conscious companies about which herbs are being adulterated with what can be done about the problem. Though nobody has claimed such initiatives will cure the problem entirely, there remains a swath of companies that want to do the right thing but are hindered by a lack of knowledge of the current methods of adulteration.

“We’ve tested maca from all around the world using spectrometry and DNA testing,” says Gaia Herbs’ King. “The reason we started testing other macas is we were wondering how in the world can our competitors sell maca at this price. When we tested it we found it’s not all maca. We found Chinese maca adulterated with traces of flour and daisy. They do that to keep prices low, and then the consumer buys maca and doesn’t get any benefit from it.

“What it does is erode the entire industry,” he says, “Including the Peruvian farmers who sold out. Any kind of adulteration in the supplements market is going to be bad for perceived efficacy and potency of the product. That’s the worst thing. That’s unfortunate.”

The price spikes have caused a ripple effect on finished products. Some companies had to raise their consumer prices. Other brands—as ever in the botanical business–bought cheap product, did not verify the certificate of analysis, and offered regularly priced maca that was no doubt adulterated.

“Products containing low-quality maca could erode consumers’ faith in maca and the companies that sell it,” says Navitas’ Adelman. “That could lead to the eventual demise of the market, which would severely impact the farmers in Peru, many of whom we have partnered with for more than a decade.”

Today, maca prices have modulated back down from the stratosphere. Peruvian supplies are up, and China is planting more than ever. But it’s difficult to tell whether Chinese maca is grown in Yunnan Province or Tibet. And only high-end testing equipment employed by the likes of Gaia Herbs (which also tests maca for Navitas) can detect whether phytochemical biomarkers are high, even if a material registers as bona fide maca. And of course certificates of analysis are rare to be trusted, yet some companies still do, not least because the price of the raw material is right, and the cost of testing incoming product is seen as not worth the cost.

It’s the same story that has played out in many areas of the supplements world, from coQ10 a decade ago to curcumin and black cohosh today. New legal and regulatory efforts are seen by many in the responsible supplements industry as being good things to bring to heel the problem of adulteration. But, as Kilham noted, the legend of natural products with an aura of the amazing will continue unabated.

What, then, will be the next maca? Kilham is preparing to begin exploring southeast Asia. The next blockbuster could be waiting in a remote valley, packed with properties and potential, and a whole new set of market challenges for the industry.