HomeManufacturing and Supply (Business Resources)Is the 'natural' label harmful to the industry?
Recent
Latest
4 tips to get ahead of chemical concerns in packaging
May 20, 2022
7 CBD favorites in the increasingly popular gummies format
May 20, 2022
Mission MightyMe helps parents introduce allergens to babies
May 20, 2022
UNFI's Eric Dorne to step down as chief operating officer
May 20, 2022
Trending
Whole Foods' honors 30 companies with 10th annual Supplier Awards
May 18, 2022
Getting ready for 2023: Trends for brands to consider
May 17, 2022
Sponsored Content
The rise of sustainable business – eGuide
Sponsored Content
Natural beauty market trends
Jun 16, 2021
Natural Foods Merchandiser
brought to you by

Is the 'natural' label harmful to the industry? 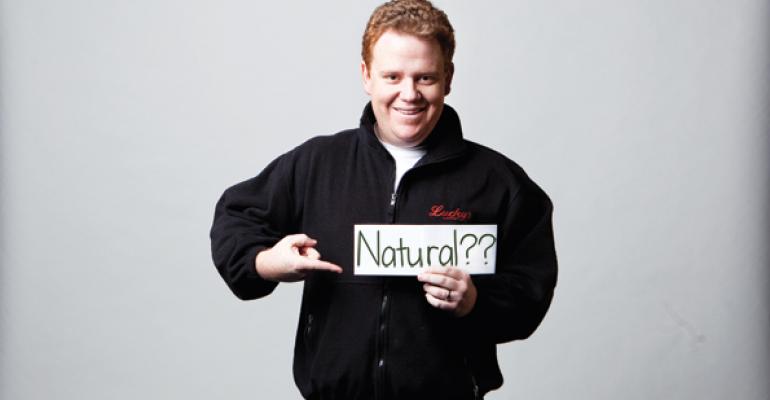 <p> Bo Sharon, owner of Lucky&#39;s Market in Boulder, Colo.</p>
If the FDA will not better define the term natural, Bo Sharon and other retailers wonder if industry should give up on the label altogether. See how manufacturers and retailers are standing up to what some call a meaningless label.

When Bo Sharon sees the word "natural" emblazoned on a food package, it brings up more questions than answers.

If the product contains soy, corn or canola, was that crop grown from non-genetically engineered seeds? If the food has been sweetened, was high fructose corn syrup used? If it’s meat, was the animal humanely raised? And regardless of the product category, will the average consumer recognize the ingredients listed on the label?

It’s these many questions surrounding the term natural that threaten to erode the value of products emblazoned with the term, says Sharon, owner of Lucky’s Market in Boulder, Colo. “It’s absolutely time to strap guidelines onto natural. If we continue down the current road, we’re bound to see the birth of other phrases that are subject to personal interpretation, such as truly natural or never-ever-ever-never-ever. Granted, these are laughable, but hopefully shine light on the fact that, without guidelines, anything goes when it comes to labels.”

Sharon isn’t alone in his dissatisfaction with natural’s widespread and loose usage. “For people who have been around the industry for awhile, natural used to mean something,” says Dean Kallas, purchasing manager at Willy Street Co-op in Madison, Wis. “But now the term has been co-opted to the point that its meaning has been totally diluted. I think the government should do more to clarify it, but in the meantime, we’ll do the best we can.”

Nineteen years after the Food and Drug Administration offered up a vague, unofficial definition of natural—“nothing artificial or synthetic has been included in or added to a food that would not normally be expected”—consumers, retailers and manufacturers are clamoring for more clarity and are decrying what they see as rampant “naturalwashing.”

In the past year, more than a dozen lawsuits have been filed against major food companies for slapping 100 percent natural labels on everything from Frito-Lay corn chips to Wesson cooking oils made with genetically modified ingredients to AriZona Iced Tea made with high fructose corn syrup.

In November, the FDA issued a rare warning letter to ConAgra subsidiary Alexia Foods for “misbranding” its Roasted Red Potatoes and Baby Portabella Mushrooms as natural, even though they include the chemical preservative disodium dihydrogen pyrophosphate.

Does this mean the federal government is paying more attention to the issue? “Yes,” says FDA spokesman Sebastian Cianci, who adds that the agency is working to “gain a better understanding of how natural is used in the marketplace and how consumers perceive the word.”

Does this mean the FDA will actually do something about the issue this year? Probably not, industry leaders predict. Although some manufacturers are working with the Natural Products Association to develop a new natural food seal, others are moving away from the word altogether, rejiggering their packaging to emphasize more clearly defined attributes such as Non-GMO Project Verified and pasture raised.

“The consumer, via the retailer, is very confused, and the manufacturers are very frustrated,” says Cara Welch, NPA vice president of scientific and regulatory affairs. “No one knows what natural means anymore.”

You might not think that the following ingredients should be considered natural, but under the Food and Drug Administration’s loose definition, these items may appear in foods labeled with the term.

A matter of semantics

The confusion started Jan. 6, 1993, when—after being flooded with complaints about pseudo-natural products—the FDA conceded that “because of resource limitations,” it would not establish a regulation formally defining the term. Instead, the agency fell back on an informal declaration that any company could use the expression, unless its products included “added color, synthetic substances and flavors.”

But what if the added color was made from beets? What exactly is a synthetic substance? And what if synthetic substances—such as pesticides, GM seeds and petrochemical solvents—were used in the making of an ingredient, rather than added to the finished product? Over the years, industry has tried to push the FDA to answer such questions.

In 2006, the Sugar Association petitioned the agency to officially define natural as excluding high fructose corn syrup, which is developed using chemical fixing agents and can contain mercury. The FDA declined; and since then, in an effort to position high fructose corn syrup as being “as natural as sugar,” the Corn Refiners Association has been engaged in a campaign to change the sweetener’s name to corn sugar—much to the FDA’s chagrin.

As Welch sees it, under the ambiguous natural definition the FDA has in place today, a yogurt company wishing to color its strawberry yogurt with beet juice cannot use the term natural on its label. But a sweet drink made with high fructose corn syrup can.

When it comes to meat, the situation is equally sticky. In 2009, the U.S. Department of Agriculture revised its definition to say that “naturally raised” meat must have been raised “without growth promotants or antibiotics and never fed animal byproducts.” But the definition says nothing about whether the animal was raised humanely.

“It has nothing to do with how the land or the animal is treated,” says Jeff Tripician, executive vice president of Alameda, Calif.-based sustainable meat producer Niman Ranch. “In my opinion, this new definition made things worse. It made the commodity packers feel great because they could now put natural on their packaging with confidence. Almost all fresh meat would qualify as natural now.”

A better definition or a new word?

Since 2008, the NPA has certified 607 personal care and home products and 247 ingredients from 64 companies through its Natural Seal program. Welch says the association had hoped to unveil its first natural seal for food in early 2012, but the process has been slow going.

“We are not much further along than we were last year. It is a hairy subject, and it is going to take some time,” she says, noting that the NPA intends to roll out a seal for cereals and other processed foods late this year and then move on to other categories, including meat, poultry and dairy. “We have to be sure the industry is to the point that every ingredient we limit them to is commercially available. We don’t want to write such a strict standard that no one can certify it.”

This is precisely why the FDA has shied away from the issue, says Ricardo Carvajal, an attorney who specializes in food policy and spent five years with the FDA. “No matter how you draw the circle around this term, some people are going to be left out, and they are not going to be happy about it,” he says. “If you look at everything the FDA has on its plate, and you look at its funding, there is absolutely no reason from a public health perspective for it to take this on.”

Well aware of this fact, some manufacturers are writing off natural as meaningless and moving on to other labels. For instance, Niman Ranch will unveil an entirely new package in the fall, specifying that a product is “raised by U.S. family farmers committed to sustainable and humane practices.”

Retailers are taking a stand too. Berkeley, Calif.-based Natural Grocery Company now refuses to stock any new products containing “at-risk” ingredients such as corn, soy or canola that are not certified by the Non-GMO Project. Ultimately, the store would like to move entirely to USDA Organic—a standard that is well defined and enforced, according to Bob Gerner, general manager.

Although many consumers still rank “100 percent natural” as the label they’d most like to see on a food package, they too are evolving, ranking “Grown in the USA” a close second, just ahead of the USDA Organic seal, according to a new report by Knoxville, Tenn.-based research and advertising firm Shelton Group. “Consumers are getting more and more interested in food sourcing,” says Karen Barnes, vice president of insight for the firm.

Mark Kastel, cofounder of the Cornucopia Institute, a farm-policy research group in Cornucopia, Wis., has been a vehement critic of the misuse of natural over the years, publishing a series of reports highlighting hidden toxins in so-called natural foods. But he’s not so sure developing a better definition of the term is the answer—particularly if compliance is voluntary or there’s no regulatory mechanism to enforce it as there is with USDA Organic.

“If there’s nobody watching, it won’t really matter,” Kastel says. His solution? Instead of spending time and money to better define natural, devote those resources to a different message: Buy organic.

Are natural, alternative sweeteners any better than sugar?
Apr 17, 2012