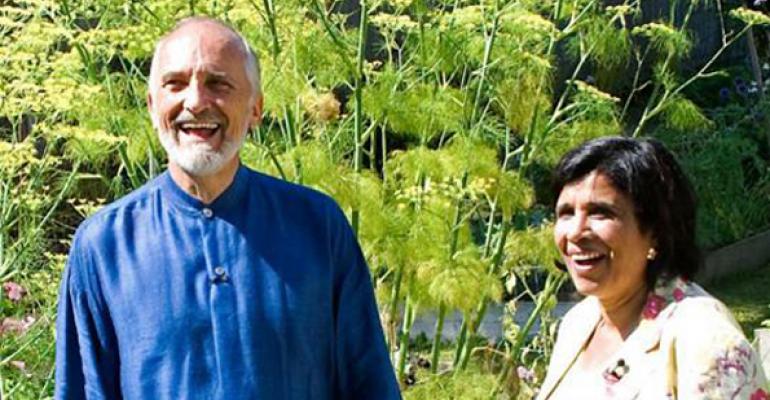 The founders of Nature&#39;s Path Foods called the natural foods industry to action on Proposition 37 during an appearance in Boulder, Colo.

Through poetry, story and even song, Arran and Ratana Stephens shared the tale of Nature’s Path Foods— from prayer to politics—to a room packed with natural industry representatives in Boulder, Colo., Thursday evening.

Arran opened At the Epicenter, produced by Boulder-based businesses Compass Natural Marketing and Best Organics, with his favorite words, as he recalled the company’s roots:

“I started alone on the journey of love, filled with faith and zeal; At every step travelers joined me, and soon we were a caravan.”

Nature’s Path—or more correctly, the Stephenses—began as lone pioneers seeking right livelihood. And while the company has grown incredibly, his simple philosophies guide: It’s not always the destination that matters, but how you act, how you treat everyone and how you treat the earth.

Independence and social responsibility have remained important pillars as the company has grown from its rocky beginnings when the plant opened in 1990 (when meditation and prayer helped him through) to a company that fields at least one acquisition offer a week. But while exit strategies seem integral to building business today, the Stephenses have focused on succession, leaving a living legacy “that would help (the kids) and help the world.”

“We never built the company to sell it, we built it to last,” Arran Stephens said.

Business building continues with a philosophy of always improving with incremental moves every day, which added up to 25 new product launches last year.

And the family’s commitment to social and environmental responsibility has extended to the fight to label genetically modified foods.

Nature’s Path was a founding member of the Non-GMO Project and this year gave $600,000 to the Right to Know campaign for California’s Proposition 37. The company also helped fund a recent series of videos to raise awareness about the issue. They shared the newest one, “Kids are not Lab Rats: Vote Yes on Prop 37,” Thursday evening and called on those in the audience to donate to the fight in the last weeks of the campaign.

And while reps may not have been present, Stephens called on organic leaders and pioneers, particularly those silenced by major-corporation parents, to step forward to “redeem yourself” by donating to combat the opposition that has been spending $1 million a day “erring” ads against the proposed law.

For Stephens, business and politics meld as one mission as taught and later set to the song “This Earth is Ours” by his father. Stephens added the subtitle “A Farmers Anthem,” and sung it for the audience. “Earth is ours today … we’ll pass it on to other hands more fertile than today.”

“The word ‘natural’ is the most misused word in the English language,” Stephens said Thursday evening.

The industry needs to focus sharply on the difference between it and “organic,” he added.

And consumer confusion that the GMO label is better or equal to organic also worries him because pesticides could be used in non-GMO food production.

Stephens’ company was a founding member of the Non-GMO Project, and its products carry both the USDA Organic certification label and the project verified stamp. But he strives to make clear the importance of organic as a standard.

“It’s incremental steps toward a better future and that’s why we supported (GMO labels),” he said.