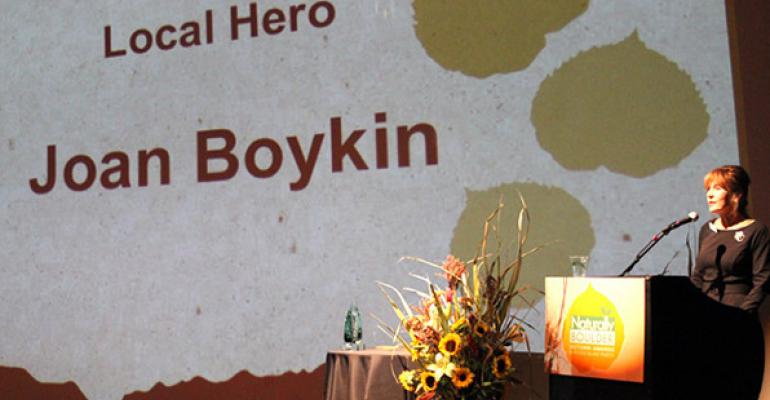 Joan Boykin is a formative figure in the natural products industry. She was a founding member of Naturally Boulder and an executive director at the Organic Center. She has worked hard to support organic food production and is now the first female natural products executive to receive a Lifetime Achievement Award from Naturally Boulder. Here is the inside scoop on this accomplished award-winner.

You have enjoyed a long and illustrious natural products career in Boulder with many leading brands and retailers. How did you come to work in the natural products industry? What keeps you inspired to continue? 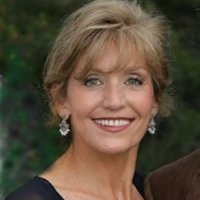 My interest in natural and organic food began when I was in college in the late 60s and was exposed to the work of J.I. Rodale. J.I. pioneered the U.S. organic movement and founded/published Organic Gardening and Prevention magazines. During that impressionable time in my life, I also started going to Amish farmers' markets. It was here that I learned about their simple farming methods and was exposed to new and unusual plants and remedies.

Meanwhile, my future husband, Dave, was going to school at CU and shopping at Green Mountain Granary, one of the first natural food stores in Boulder. We were concurrently integrating natural foods into our lives even though we hadn’t yet met each other!

After we married and moved to Colorado in the 70s, we met Mark Retzloff and Hass Hassan and over the next few years, I began helping them with graphics, signage, displays, and store materials for Rainbow Grocery, their natural foods cooperative located at York and Colfax in Denver. Later, as they leveraged their passion and expertise in natural foods to create Pearl Street Market (and eventually Alfalfa's in Boulder), I continued to work with and learn from them.

My desire to eat simple, whole foods grew exponentially when Dave and I started our family in the 70s.  We understood the correlation between nutrition and early childhood health and development, so we served our children the cleanest food we could find and afford. Today, we continue that practice with our grandchildren.

Today, I am inspired to give back to future generations, a stage of human development called generativity that was coined by the famous psychologist, Erik Erikson. According to Erikson, some individuals in mid-to-late life are deeply motivated to leave the earth in better shape than they found it.  For me, generativity takes the form of teaching, mentoring and volunteering, primarily within the wonderful natural and organic products industry in which I have been privileged to be involved.

Tell us about your work with the Organic Center. You were Executive Director charged with advancing the health and sustainability message of organics via scientific research. Do you feel that your good work at the Organic Center helped move the dial? How much further do we have to go?

The Organic Center’s mission was to advance credible, evidence-based science on the health and environmental benefits of organic food and farming, and communicate this to the public. Some of our noteworthy research contributions included the completion and release of a dairy calculator, involvement in the PlosOne Strawberry Fruit Quality Paper and a grain study that compared the differences between organic and conventional grains. We made all of the Center’s research available to the public at no cost—a tremendous resource to consumers, policy makers, media, business leaders and educators.

Organic agriculture will continue to gain traction worldwide as a result of the growing awareness and concern about the health and environmental issues we face. We still have a long way to go, but if each of us can commit to increasing our organic food purchases, our actions will have a positive impact on the earth and its inhabitants.

You’ve also been active with GMO-labeling initiatives like Just Label It. GMO labeling is on the ballots in Colorado and Oregon, but with an onslaught of well-funded advertising deflating their chances of success, do you think GMO labeling can happen in the USA? What are the key factors that can create change?

Yes, I do think that GMO labeling can happen in the U.S., however, it will take time and sustained effort for us to achieve the degree of transparency Americans deserve. Thanks to the efforts of organizations like Just Label It (JLI), awareness is growing and consumers are becoming more educated on GMO-related issues.

When I served on the JLI board of directors, we worked with the Mellman Group to conduct a survey of 1,000 general election voters, and in March 2012, Mellman reported the results: more than 9 in 10 voters (91%) favor the FDA requiring that “foods which have been genetically engineered or containing genetically engineered ingredients be labeled to indicate that.” Only 5% opposed such a requirement and another 5% did not know. That is a pretty strong indication that consumers want to know what is in the food they eat.

Our great country was founded by courageous people who ventured into the unknown to pursue a better life for themselves and their families. We can take a page from our forefathers’ book by pioneering a more transparent food system. We deserve the right to know what’s in our food and choose accordingly. It’s called truth in labeling.

Your latest undertaking is serving as VP of Marketing and PR for the rapidly growing brand Way Better Snacks. What attracted you to the idea of working exclusively with one brand?

There were two compelling factors that attracted me to Way Better Snacks, a brand that I absolutely love working with!

First, our sprouted snack products are clean, delicious and nutritious, and that matters to me personally. We don’t just sprout any old ingredients; we choose premium, non-GMO, on-trend ingredients that consumers are seeking—such as chia, quinoa and flax—and we sprout them to enhance their nutrients and make all those great nutrients more readily available for the body to absorb. Depending on the variety, we further boost nutrient content by adding other sprouted powerhouse ingredients like kale seeds, daikon radish, brown rice, and broccoli seeds. For some folks, snacks have replaced meals altogether, so we want to help them by offering way better snacking choices.

Second, I have the pleasure of working with Jim Breen, founder/CEO of Way Better Snacks, with whom I worked at Celestial Seasonings and later, the Hain Celestial Group. I am also working with several other terrific folks from my Celestial Seasonings days, as they now work for Way Better Snacks! Jim is a seasoned CPG industry veteran, hence he has a depth of experience with natural brands and he’s a terrific person to boot! Jim recently acquired our long-time sprouting partner, BioEssential Botanicals, a leader in sprouting in Canada—now renamed “Live Better Sprouting Innovation,” thereby amplifying our power to innovate with speed and unsurpassed quality. In sum, it has been a blast working on Way Better Snacks!

I also have the great pleasure and honor of consulting for WhiteWave Foods on a variety of projects, and I thank my lucky stars for the opportunity to work with such a world class company.

You’ve worked with many, exciting young and growing brands in the natural and organic industry. If you had one piece of advice for them as they set out to build their brand, what would it be? What are some fatal errors you’ve seen in marketing a new natural brand?

As you set out to launch your new brand, be sure you are able to answer a number of critical questions.  What benefits do you offer that make your brand different and better than others in the same frame of reference? Are these benefits relevant and compelling to your target? Do they fulfill an unmet need or solve a problem? Are consumers willing to pay your price? Where is the current market for your product? What is your distribution channel strategy? What is the cost of entry?

Some of the fatal errors I’ve seen in marketing a new natural brand are:

Mo Siegel, founder and former CEO of Celestial Seasonings—someone I learned a lot from—used to say, "Sustain the core, stimulate progress," underscoring the need to keep your foundation strong, as you can easily get distracted or seduced by new, new, new.

My final word to the wise: Take a disciplined approach, for it increases the likelihood of your brand’s success in the marketplace.

What is a little known fact about you?

I started my first business in high school making, monogramming, and selling Bermuda Bags to supplement my meager allowance. It was quite successful by my standards at the time.  My Aunt Eleanor taught me to sew, and my parents bought me a used (but sturdy) Italian-made sewing machine. To this day, I still enjoy sewing on it and have two of the old Bermuda Bags I made, branded with my own fashion label!