Slow Money and the next stage of local food 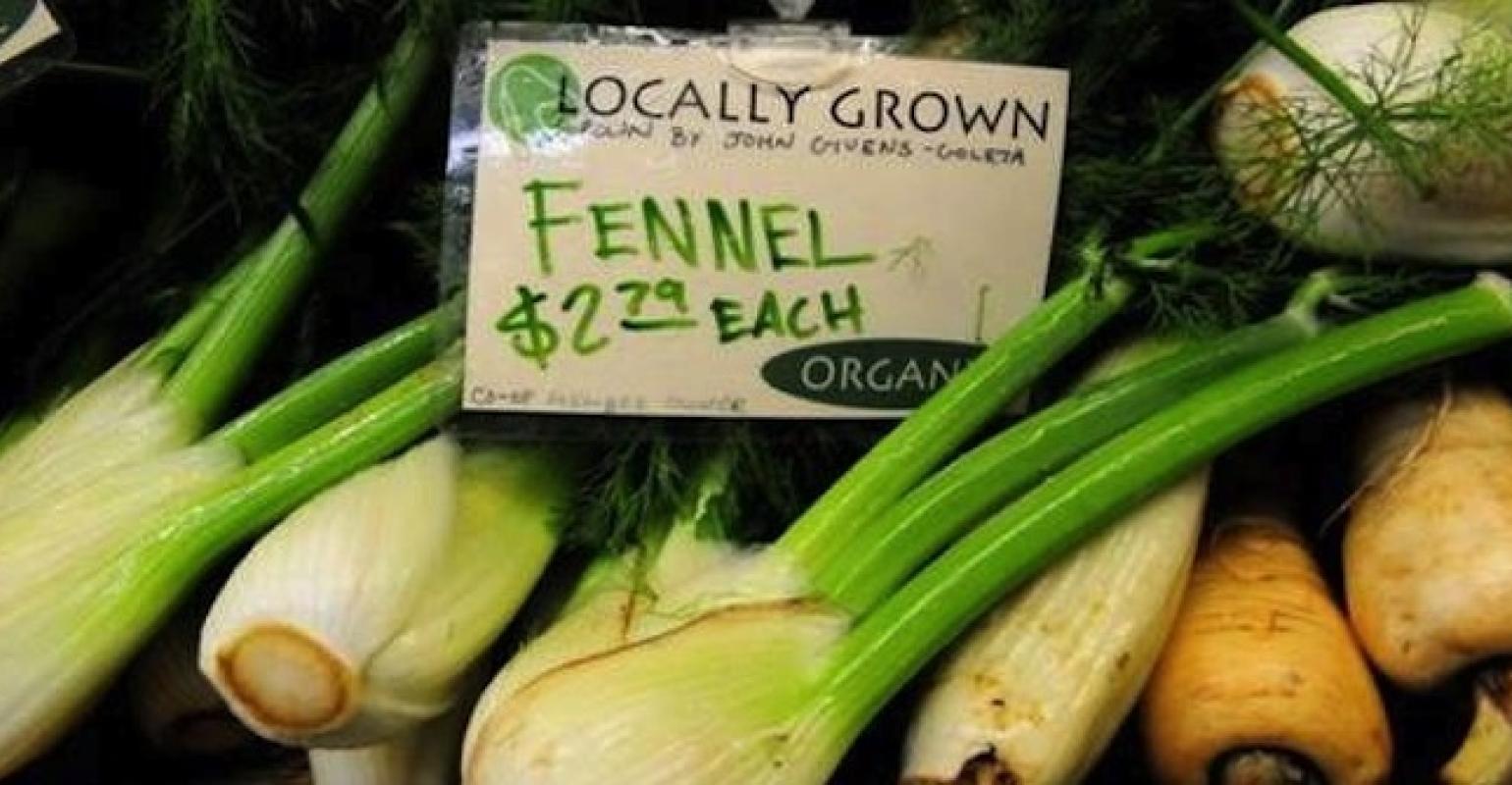 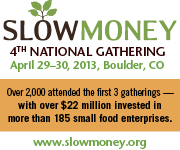 From her own collaboration with Susan Witt and others in Great Barrington, Mass., while establishing CSA Gardens in 1990, the CSA movement has grown to at least 4,570 documented American farms offering food shares to local community members, and their ranks actually may include as many as 6,500 gardens, farms, ranches and orchards using the CSA model. 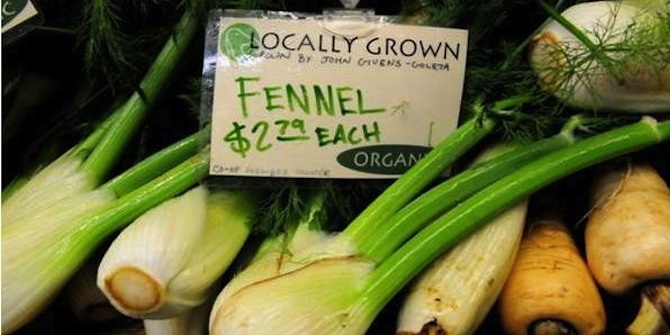 By 2012, there were 7,864 farmers markets in the U.S., about 6,500 more than when the food re-localization movement was born in the early 1990s. Overall, the sales of foods marketed as “local” have sustained “growth rates” of 24 percent or more for at least 12 years. In truth, these are not “growth rates” but rates of restructuring, reducing the length of food chains for the benefit of both producers and eaters. In the specialty food industry, “local” has become the most important food-marketing claim today and is anticipated to remain so for at least the next three years.

While we feel gratified that the annual restructuring/growth rate of local foods sales has come to surpass that of Wal-Mart in the U.S. over the last 21 years, most of this restructuring in the food industry has been ad hoc. That is, it has resulted from widely dispersed, rather uncoordinated innovations by inspired individual entrepreneurs rather than through intentional redesign of the structure and function of our food systems.

To date, no local food system has been fully redesigned to meet the three simultaneous goals of land health, human health and community economic health, restructuring its assets and processes to favor equity, sustainability and resilience over other values. However, recent initiatives such as the Neo-Food Network in Cleveland, the Roots of Change initiative in the Bay Area and Transition Colorado in the Front Range are well along their way to reaching these three goals in their communities.

We can have orchards that grow hundreds of varieties of perennial crops, such as heirloom apples, that retain soil, sequester carbon and sustain biodiversity, but unless those crops remain economically viable, we will lose such natural assets. Likewise, we may have local restaurants and cafeterias featuring healthy foods that can reduce diabetes and heart diseases, but if they are loaning money through conventional banks with headquarters in New York or Geneva, financial as well as human resources are still likely to drain away from our communities.

This is where Slow Money can and must play a pivotal role. As the food re-localization movement reaches maturity, it must intensify its exploration of novel means to finance the startup and maintenance of innovative food and farming microenterprises across the country. Until now, we have had few means to keep the wealth recycling and doing added good in our community economies. Until now, we have gone as far as we can possibly go in food re-localization without rebuilding the infrastructure we have lost from most food-producing landscapes over the last half-century: grist mills, nurseries for locally adapted trees and pollinator-attracting plants; meat processing plants co-located with biodiesel generator, bone and blood meal processors, hide tanners and charcuteries. We cannot make many more gains — or even sustain the current “restructuring rates” — without employing the strategies that Slow Money and its many allies are now exploring.

One example of such innovative strategies for community economic health comes from a rural area of Santa Cruz County, Arizona, where unemployment rates continue to be as high as 17.1 percent and per capita income is a paltry $16,209 a year. It has recently incorporated Borderlands Restoration LLC — Arizona’s first approved limited profit, limited liability, for-profit/nonprofit hybrid — to rebuild the hydrological, ecological and social services upon which our food security depends.

For the last two years, the area has been restoring water flows to formerly dry watercourses and restoring wildlife habitats on farms and ranches to attract and sustain pollinator populations sufficient to ensure economic crop yields. We have initiated several “guerrilla” nursery operations to produce native pollinator-attracting plants and heirloom fruits adapted to our changing climate. At least six farms and ranches now are certified as “pollinator-friendly,” and Patagonia, Ariz., is proudly hailing itself as the “pollinator capital of the United States” due to its diversity and abundance of wild pollinators.

We see the restoration of pollinator populations and hydrological flows in desert watercourses as a means of rebuilding the “natural infrastructure” for a more sustainable desert agriculture, one that will be increasingly needed as the ecological impacts of climate change accelerate.

We are beginning a campaign to co-locate on the same parcel of working lands a large native plant nursery, rentable acreage to incubate new farmers of food crops, a grass bank for ranchers to draw upon during drought years, irrigated hay pastures, and a major composting facility that will draw upon the food wastes coming from the Nogales port of entry, the third-largest portal for fresh vegetables and fruit coming into the U.S. At the same time, we will restore riparian habitat, wetlands and natural mesquite savannas and grasslands to retain both rare species and economically important ones, such as pollinators and harvestable wild fruits.

These initiatives have the potential to create rural livelihoods with livable wages in a way that heals differences between ranchers and environmental activists, between Anglos and Hispanics, and between rural and urban residents. Our economic structure may need to be more innovative in order to ensure that these projects draw upon and regenerate local wealth, but our goals are anciently traditional: to keep people connected to the land and to one another.

While we welcome intellectual input and investments to help our southern Arizona food system redesign succeed, we are just as interested in helping other communities meet their goals in ensuring land health, human health and economic health. Slow Money’s pivotal leadership role in this next phase of food re-localization — and in rebuilding soil and water reserves — cannot be overstated. Its emergence has occurred at a critical moment in American history.

Learn more at the Slow Money National Gathering in Boulder, Colorado on April 29 and 30.

Gary Paul Nabhan, a MacArthur Fellow who sometimes is referred to as the father of the local food movement, is the Kellogg Endowed Chair in Sustainable Food Systems for the Borderlands at the University of Arizona, and is on the leadership team of the Borderlands Habitat Restoration Initiative that has spawned the Borderlands Restoration L3C. He will be a speaker at Slow Money’s 4th National Gathering in Boulder, Colo., April 29–30. He welcomes other Slow Money activists to speak in southern Arizona as follow-up to recent visits by Woody Tasch and Marco Vangelisti (co-leader of Slow Money Northern California), facilitating the formation of a state chapter and several more localized investment clubs. Visit Nabhan’s website for his many writings and his schedule of upcoming lectures and workshops.

Why local is logical for every indie natural retailer
Jan 27, 2013