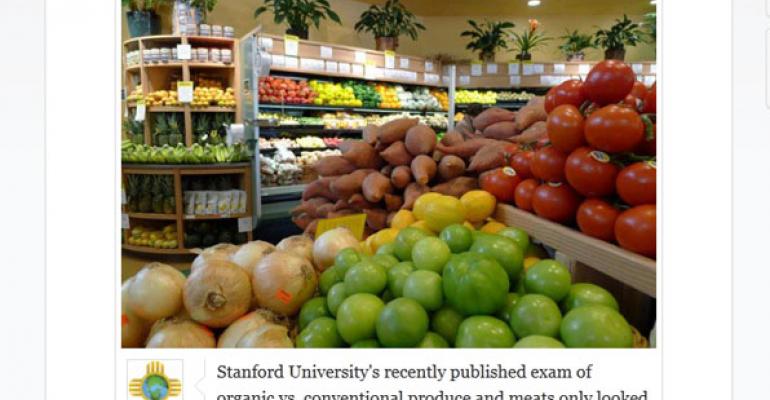 Each week Natural Foods Merchandiser shares how natural products retailers and others use social media in its Social-able column. This week we share how some retailers reacted to Stanford University&#39;s organic meta-analysis.

A study that questioned the value of organic foods captured mainstream and social media attention this week. Some, but not many, natural foods retailers used the news to solidify their organic message, share an alternative take and engage their social media friends in conversation.

The takeaway: Use the attention to share your stance.

Natural Foods Merchandiser each week picks a social media post worth sharing. Gain inspiration and learn from your peers as we explore how natural foods retailers get social.

When news breaks, the Twitter-sphere and Facebook erupt. Such was the case this week when a Stanford University meta-analysis questioned organic's healthfulness.

This story serves as an excellent example of how natural foods retailers can--and should--get in on the conversation. Here, we share how some did just that with this research.
Good Earth Natural Foods used the news of the organic meta-analysis as a jumping off point to explain why people should choose organic.
Stanford University's recently published exam of organic vs. conventional produce and meats only looked at statistically significant differences in nutrition. The Stanford researchers failed to appreciate several other important reasons for choosing organic:<br> <br> 1. Support small farms and rural communities - Most organic farms are small, independently owned farms of fewer than 200 acres.<br> <br> 2. Protect children - The average child receives four times more exposure than an adult to at least eight widely used cancer-causing pesticides applied to food crops.<br>... <br> 3. Save energy - Large-scale, conventional (not organic) farming uses over 12% of our country’s entire energy supply and more petroleum than any other industry!<br> <br> 4. Protect farm workers - The National Cancer Institute has found that farmers exposed to herbicides have six times the risk of non-farmers of developing cancer. <br> <br> 5. Promote biodiversity - Vast areas of land planted with a conventional single crop – called monocropping – without interspersed diversity of vegetation makes that crop more susceptible to pests. <br> <br> 6. Prevent soil erosion - Soil fertility and erosion are carefully controlled on organic farms using ecologically sound methods like crop rotation and cover cropping.<br> <br> 7. Preserve water quality - The Environmental Protection Agency estimates that pesticides have contaminated the ground water in 38 states.See More</a>Good Earth Natural Foods
Better Health used Twitter to share the Organic Trade Association's take on the study.
Study Confirms Organic Benefits... http://fb.me/1EL0BqgJOBetter Health
Sacramento Natural Foods Co-op linked to Grist's coverage and posed a question to engage its Facebook friends in conversation. Here's the post and some of the reactions it received.
We want to hear your perspective on this! Do you think Organic is a better choice for you and your family? We do! Sac Natural Foods Co-op
‎"Stanford doctors dug through reams of research and concluded there's little evidence that going organic is much healthier, citing only a few differences "involving pesticides and antibiotics." LOL Those are some major differences! Especia...lly since there has been a number of "studies" that have linked pesticides to cancer. That's like saying they dug through reams of research on gopher snakes and rattlesnakes and only found a few differences... the fangs and the poison! The first question I would ask myself is who funded this "study"See MoreMichael Welch
There is a great debate on this on the website " Intelligence Squared" . It made affirmed eating organic is good, to me. Organic fruits an veggies are not more nutritious. The point is less chemical fertilizers and pesticides went into their production which is very significant to me. And the organic vs non on the meat topic...oh man! Huge. Mason Munson
There are significant differences in organic vs. conventional. "Conventional ag" uses products to kill all life in the soil and then add back fertilizer, at rates far higher than necessary because plants do not easily absorb chemicals as fo...od. Organic growing methods encourage the diversity of microbial life. The bacteria and fungal colonies in the soil are breaking down naturally fertile products such as manure into more absorbable forms of nutrition for the plant, creating stronger, more resilient and healthy plants through this transfer. My understanding and experience is that this natural order produces more nutritious plants. Not to mention that conventional ag is a major polluter of the planet. This is resulting in environmental damage that is exhibiting itself in a number of ways, and does effect our health.See MoreAdam Klieg
This organization's posting shows the power of community (22,875 on Facebook). It received 77 likes, 69 shares and 20 comments.
So once again we have the media trumpeting the most shocking tidbit as if it were representative of the entire study, and leaving out the most important findings—that organic foods are far safer in terms of pesticide content, antibiotic-resistant bacteria, and GMOs. <br> <br> <a href="http://www.facebook.com/l.php?u=http%3A%2F%2Fwww.anh-usa.org%2Fnew-junk-science-study-dismisses-nutritional-value-of-organic-foods%2F&h=TAQH08ZfCAQEfzaGPwVNMrszCbPkM3nKs_ewXvYEdxivWXg&s=1" class="">http://www.anh-usa.org/new-junk-science-study-dismisses-nutritional-value-of-organic-foods/</a>Alliance for Natural Health USA
The Non believers of organic products practically knocked my door down with this info...really??? I chose organic and nothing will change my mind.Karen Hardy
It was on every piece of news yesterday. Always starting out negative, then talking about how organic food is better for you. But it has the same nutritional value. Really? Is that all that is important about it? So many people were angry about this news because they didnt see the entire viewing. I was mad because I believe Monsanto trolls probably had a hand in making it so negative to begin with. Why does it even have to make one angry?Heidi Hanna
Choosing Organic was not about nutrient content for me it was about the Pesticides and other crap being sprayed on our produce....Connie Nuyen Williams
How are you talking about this news with your customers?
TAGS: Archive Branding and Marketing
0 comments
Hide comments
Related