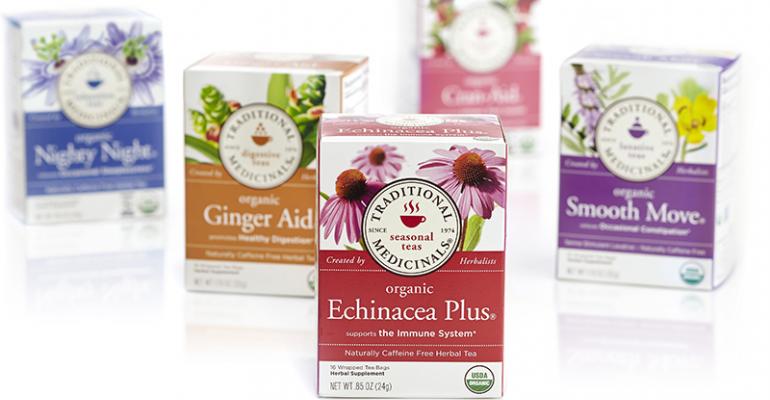 Founded in 1974 with a vision for the rebirth of herbalism in North America, the company continues advancing herbal knowledge, growing faster than at any time in its history.

The company that pioneered the wellness tea category is turning 40 on November 20, 2014. Traditional Medicinals, founded in 1974 by three close friends in a small herb shop along Northern California’s Russian River, has experienced continuous growth since the company began. Today, it remains a leader in helping people live healthier lives and preserving the ancient plant knowledge of Traditional Herbal Medicine.

Herbalism is at the heart of everything Traditional Medicinals does, and the company samples, tests and processes nearly one hundred herbs from around the globe, from well-known favorites such as peppermint and ginger to other favorites such as slippery elm and fennel. Traditional Medicinals currently offers more than 50 herbal teas in nine wellness categories: detox, digestive, green, herbal, laxative, relaxation, seasonal, tonic and women’s. Best-sellers include Smooth Move®, Throat Coat® and Mother’s Milk®, all of which are original formulas created by third generation herbalist and company cofounder Rosemary Gladstar.

Drake Sadler, another cofounder, currently serves as chairman of the board and chief visionary officer, and he vividly recalls the company’s first day, Nov. 20, 1974. “We chose Nov. 20 for its astrological significance. For the first time in 84 years, the outer planet Uranus—associated with the power of transformation—entered the sign of Scorpio.” During this event, Sadler explains, “Uranus focuses its transformative powers on the areas of business, finance and regenerative healing. It was with this intention of blending social business and natural healing that Traditional Medicinals began.”

As the new company took root and began growing, so did its pool of expertise. Trained herbalists with extensive knowledge of century-old paradigms and scientific study came together to formulate the teas, using herbs that go through a minimum of nine rounds of rigorous testing following Good Manufacturing Practices. Traditional Medicinals uses pharmacopoeial grade herbs—a standard for quality, purity, strength, identity and composition—to help ensure the teas deliver their intended benefits.

Estimates for the wellness tea segment predict a doubling in size by 2018, to $400 million in sales in the next five years. Guiding the company today in this fast growth environment is Blair Kellison, chief executive officer, who took the reins from Sadler in 2008.

Looking forward, Kellison said, “As we head into the future, with our growth greater than at any time in our history, we envision an exponential increase in our ability to provide herbal wellness options to consumers while upholding our three pillars of sustainability—environmental protection, social equity and economic viability.”

Kellison continued, “This is a scalable business model others can be inspired by, as we ourselves are inspired by the growing number of organizations working toward better sustainability.”

One of several current sustainability initiatives is the Revive! Project® in the Jodhpur District of Rajasthan, India, where Traditional Medicinals sources the senna plant used in its Smooth Move tea. The Revive! Project is a social business partnership focused on reducing poverty and empowering women through organic agriculture. Since the initiative began in 2009, Traditional Medicinals has invested more than $1 million to help improve water and food security, education, community development and women’s empowerment.

Other highlights from the first 40 years of Traditional Medicinals include the following: