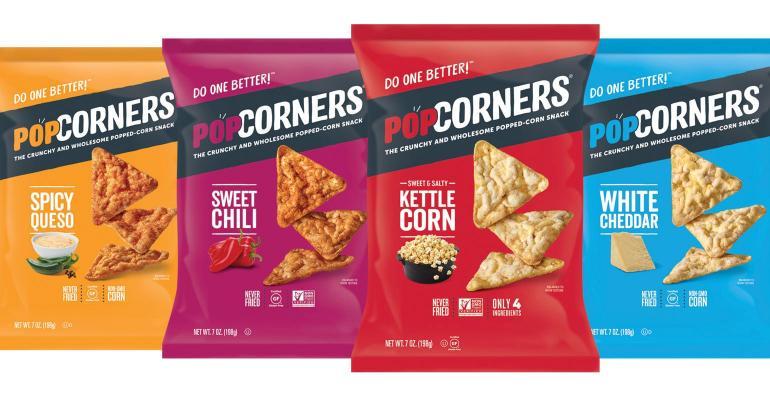 Yet behind the snack is a complicated, intentional system in which each decision is designed to improve the way in which food is sourced, one bag of snacks at a time.

This sentiment is reflected in PopCorners on-pack motto, “Do One Better,” a tagline that President Dan Morgan said is the driving force behind the company. “We push ourselves every day to improve our products, our team, our process, and three years ago we made a big step to improve our supply chain,” said Morgan. It was a move that was sparked by an effort to secure non-GMO yellow corn for the company’s products.

Perhaps PopCorners, whose parent company is BFY Brands (and before that, Medora Snacks), was particularly motivated to establish an infallible non-GMO supply chain because in 2014, when PopCorners used GMO corn, a consumer group attempted to file a lawsuit against the company for claiming the product was “all natural.” A judge ultimately threw out the case because the brand had removed the “natural” claim almost a year before the suit was filed, in 2013.

PopCorners escaped the litigation unscathed. But other companies making “natural” claims on foods containing genetically modified ingredients were not as lucky. In one of the highest-profile natural claim cases, Kashi settled a class-action lawsuit for $5 million. Apart from the needless loss of capital, the lawsuit hindered the brand’s integrity—it took Kashi years of cleaning up its practices, improving sourcing transparency and establishing a Certified Transitional organic program to woo natural consumers again. Some would say that Kashi’s reputation is still tarnished.

Going non-GMO was one way PopCorners could elevate itself as a mindful brand, and bend to the expectations of its consumers.

Whether for herbicide tolerance or insect resistance, 92 percent of corn grown in the United States is genetically engineered. Securing a non-GMO supply chain that would pass the Non-GMO Project’s stringent verification required seeking help from Bunge, a 200-year-old global ingredient supplier that Morgan said supported the brand’s interest in having a direct connection to the farmers who grow and harvest their grains in North America. Paul Nardone, CEO of BFY Brands, personally visited family farms in Nebraska to develop relationships with suppliers and, most importantly, to learn more about their vision for growing non-GMO crops.

It wasn’t particularly hard to get suppliers on board to supply PopCorners, as many farmers were already incentivized to go non-GMO because they wanted to halt excess spraying of herbicide—a symptom of GMO crops that are resistant to the herbicide glyphosate, also called Roundup Ready crops. Consumer interest in non-GMO high-risk crops such as corn, canola and soy was rapidly growing, and many farmers believed in the mission.

“What’s great about our farmer partners is that they are personally motivated to grow non-GMO corn,” Morgan said. “They believe this is the way corn should be grown and this is what they eat themselves and what they feed their families, so that same quality should be what they provide their partners to feed their customers.”

In order to ensure the corn arrived at PopCorner’s manufacturing facility in Middletown, New York, safely, Bunge and BFY Brands built an extension on a railway to usher the corn directly to the factory—rare in an industry where raw ingredients are typically shipped or trucked across the country in multiple modes.

“The main benefit of rail transportation is that it significantly reduces the amount of handling our grain encounters, which ensures higher quality,” Morgan said. Bunge is dedicated to finding efficiencies in processing and transportation practices, such as filling railcars to capacity, that can reduce overall greenhouse gas emissions (and also reduce costs).

Of course, PopCorners understands that sustainability isn’t just about the environment. It’s also about upholding a sustainable business model that supports every party involved in the creation of a product, from the farmers who grow the ingredient to the workers who operate the manufacturing equipment to the consumers who eat it. Sustenance and sustainability walk hand-in-hand.

As a conscious brand, PopCorners also operates outside of its consumer ecosystem with a children-focused program called Farm2Future, whose mission is to provide children in urban areas access to the joy of growing their own food. The program is currently in a pilot phase in partnership with several Boston-based YMCAs, and aims to educate kids on gardening, healthy food choices and improving their communities.

Why invest—and launch—an organization that doesn’t directly relate to increased sales? Dan Morgan sums it up best. “Our mantra: ‘Eat better. Feel better. Think better. Do better,’ is a reminder that being mindful about what we put in our bodies will serve not only ourselves, but those around us and will empower us to bring more goodness to the world.” Through healthier snacking, PopCorners is certainly on this path.

Esca Bona Supplier Heroes is a recurring feature of suppliers that fuel innovation in the good food supply chain. Esca Bona is an event and brand spearheaded by New Hope Network that champions the good food movement by helping finished product brands improve their supply chain, support the people who create food, and best harness technology and innovation.

Nutrient-dense snacks take a bite out of boring
Apr 10, 2018