The Road to Natural: A story of seals 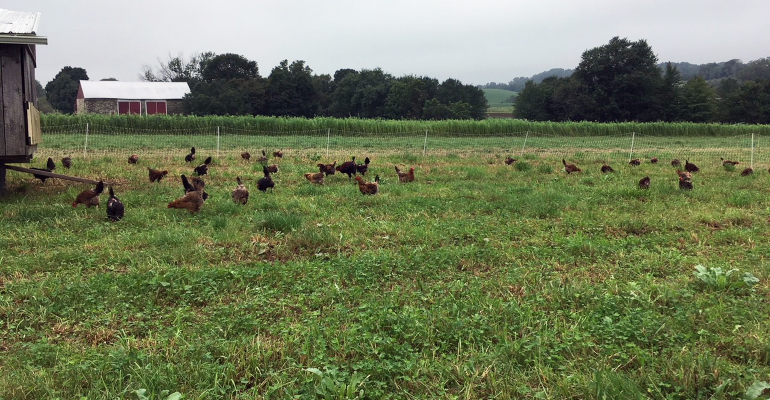 On the last day of the fourth Road to Natural series, we visit the Rodale Institute to talk about how regenerative agriculture could be "certified."

Walking the fields and pastures of the Rodale Institute’s Experimental Farm in eastern Pennsylvania, a visitor could easily be lulled into agricultural romanticism. The fields explode in green. The pastures are wide and the animals content.

This is the way farms are supposed to look.

And too few do.

We visit Rodale on the last day of our road trip exploring emerging promise of regenerative agriculture and at every stop we’ve heard nearly as much about the risk as we’ve heard about the reward. The concept of regenerative agriculture isn’t at risk, but the word “regenerative” is. It’s at risk of buzzword status. It’s at risk of losing its meaning to the great maul of marketing, in the manner of words like “natural” and “sustainable.”

But Rodale and a coalition of brands, farmers and thought leaders believe they can stop that from happening. If Rodale’s new Regenerative Organic Certification program gains traction and consumers respond, they contend, more farms might not just look like farms are supposed to look but thrive the way they’re supposed to thrive.

The ROC program is, in many way, an umbrella seal that would cover concerns monitored by other certifications, with provisions for soil health, animal welfare and fair employment. It could be the ultimate shorthand for consumers and buyers.

The “organic” component is key for Tim Joseph, founder of Maple Hill Creamery. Joseph says the word “organic” in Regenerative Organic Certified honors the NOP in many ways and consumers will make the connection. “You can’t have regenerative without organic,” he tells us.

David Bronner, CEO at Dr. Bronner’s, says brands and consumers both need that shorthand. Some people might care more about social welfare. Somebody else might care more about soil health. But that doesn’t mean they don’t care about the other issues. Having one seal answering multiple questions doesn’t diminish those questions. “It’s been a dream to have a single certification,” Bronner says.

It will add clarity, he says.

Or it could, as some question, be not simply one more layer of consumer confusion but one that, in the attempt to establish and preserve meaning for “regenerative,”  pulls meaning away from “organic” as consumers perceive it in the USDA seal. Bob Kleszics has seen it before. “People used to think organic was the gold standard,” says Kleszics, who owns Harvest Market Natural Foods in Hockessin, Delaware. “Now so many people think non-GMO is better than certified organic.”

And though, Kleszics admits, “organic has lost some of its luster,” he’s not sure retailers are ready to explain another standard, especially one as complex as regenerative.

“What does regenerative actual mean?” he asks. “Our marketing manager didn't even know.”

On top of that, Rodale is not alone. The Savory Institute has its own Land to Market verification for regenerative.

Like Kleszics, Thomas Harding is also not a fan of the Non-GMO Project’s butterfly seal. He trusts Rodale for its integrity and intent, but he’s not a fan of Rodale’s seal either. A founding president of the Organic Trade Association and a veteran of the struggle to establish the National Organic Program, Harding meets us at our last stop, a few blocks from the Baltimore Convention Center where Natural Products Expo East started a few hours before. Programs like Rodale’s and Savory’s aren’t simply reinventing the wheel, Harding says. They are adding another wheel to a vehicle that’s cumbersome with the number of wheels it already has. “Fix the wheel we’ve got,” Harding says, referring to the USDA Organic seal. “Make it ours. Make it like it’s supposed to be.”

If the NOP has problems, Harding says, they should be addressed. The regulations are not static. Instead of covering the cracks with another seal, fix the cracks, he explains.

Proponents of a regenerative agriculture seal will say that they’ve tried. The Trump administration’s move to withdraw organic poultry practice rules earlier this year is a sign that true reform is not possible now. Bronner thinks ROC could pressure change there but that there is no sense in waiting for it. Moyer sees no reason to wait.

“Timing is everything,” Moyer says. “Now’s the time for us to step forward and do something different.”