The 2019 Locavore Index: Is your state eating local? 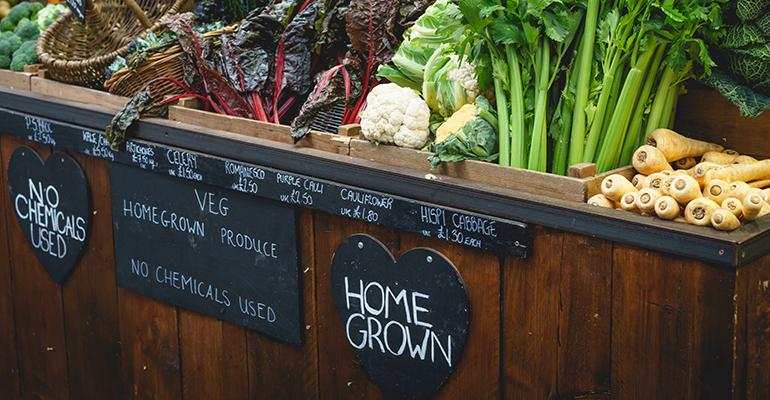 Learn which states are producing and consuming the most and the least local food via the Strolling of the Heifers 2019 Locavore Index, which was recently shook up by new agriculture census data.

Vermont still ranks at the top of the Strolling of the Heifers Locavore Index, meaning that it has the strongest producers and consumers of local food of any of the 50 states. But the rest of the Index has been considerably shaken up by new data derived from the recent Census of Agriculture conducted by the U. S. Department of Agriculture.

The Index has been published annually since 2012 by Strolling of the Heifers, a nonprofit food advocacy organization based in Brattleboro, Vermont.

“When we first launched the Index, there was very little data available indicating how much local food was consumed in each state,” said Orly Munzing, founder of Strolling of the Heifers. “We were looking at the numbers of farmers markets and CSAs (consumer-supported agriculture entities) on a per capita basis. It was an indirect measure, a proxy for the real metric, which would be the dollar value of local food produced and sold in each state.”

“Having this information allowed us to revamp the Index completely,” said Martin Langeveld, compiler of the Index. “These two metrics, combined, paint a picture of how much food is produced and sold locally in each state, through all channels. We looked at that on a per-capita basis, and ranked the states accordingly. So the methodology is much simpler, but also much more accurate.” 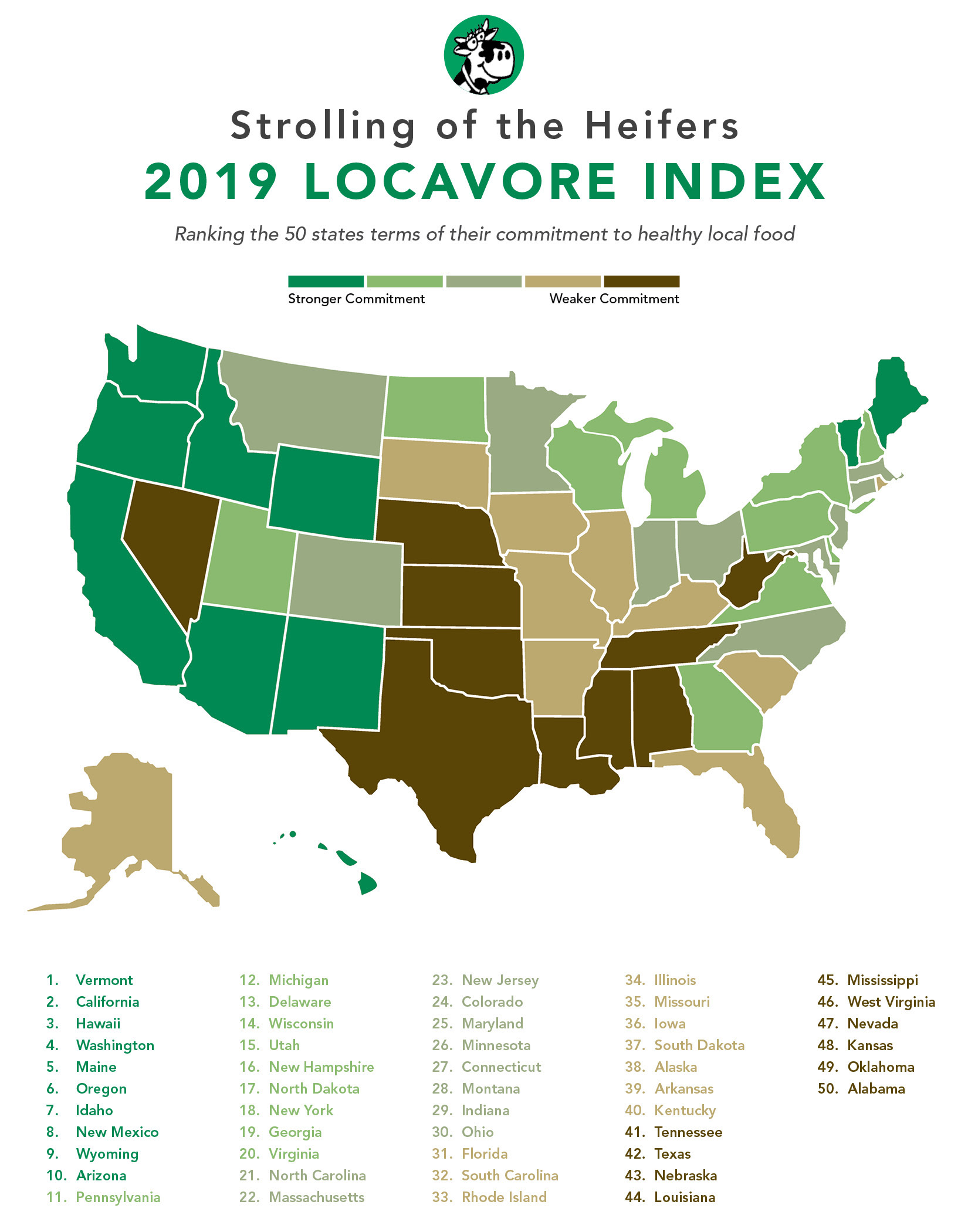 As a result of the incorporation of the new USDA data, there have been some major shifts in the ranks. For example, California, which ranked 27th in 2018, is now No. 2. Hawaii, which was 8th, is now third. And Washington jumped from No. 11 to No. 4. Other states with strong upward moves included New Mexico, Wyoming, Arizona, Pennsylvania and Delaware.

Several New England states slid to lower spots: New Hampshire moved from 5 to 16; Massachusetts from 6 to 22; Rhode Island from 10 to 33; and Connecticut from 17 to 27. Another major decline was registered by Montana, which was third in 2018 but is now 28th.

In Vermont, at the top of the list, the total local food sales per capita came to $166.22, compared to California’s $129.88 and Hawaii’s $107.29. “This is a combination of retail and wholesale sales,” Langeveld said, “so actual consumer spending on local food is more. But, when compared with per capita food consumption, including food away from home, of about $5,000 per capita, it could still grow quite a bit more.”

“That’s why we’ve been publishing the Locavore Index,” said Munzing. “The purpose of the Index is to stimulate conversations and efforts in every state aimed at increasing the amount of local food sold and consumed. That’s great for the farmers and great for consumers.”

Anson Tebbets, Vermont’s Secretary of Agriculture, Food and Markets, commented: “This index shows how the Vermont public increasingly supports local food. This consistent backing, and the evidence of solid data, tells an important story. It’s clear Vermonters like what they are buying and are supporting local agriculture. Thanks to the public, farmers, and food companies, our rural communities are stronger. Let’s build on the good news here.”

Looking at the U.S. as a whole, locavorism has clearly been growing rapidly. The value of food sold directly to consumers via farm stands, farmers markets, CSAs and online, was measured in both the 2012 and 2017 Censuses. It more than doubled during that period, from $1.31 billion to $2.81 billion—a strong indication that consumer demand for food fresh from farms is growing by leaps and bounds. The new Census metric of food sold to local retailers, institutions and food hubs was not measured in 2012 but came in at $9.04 billion in 2017. 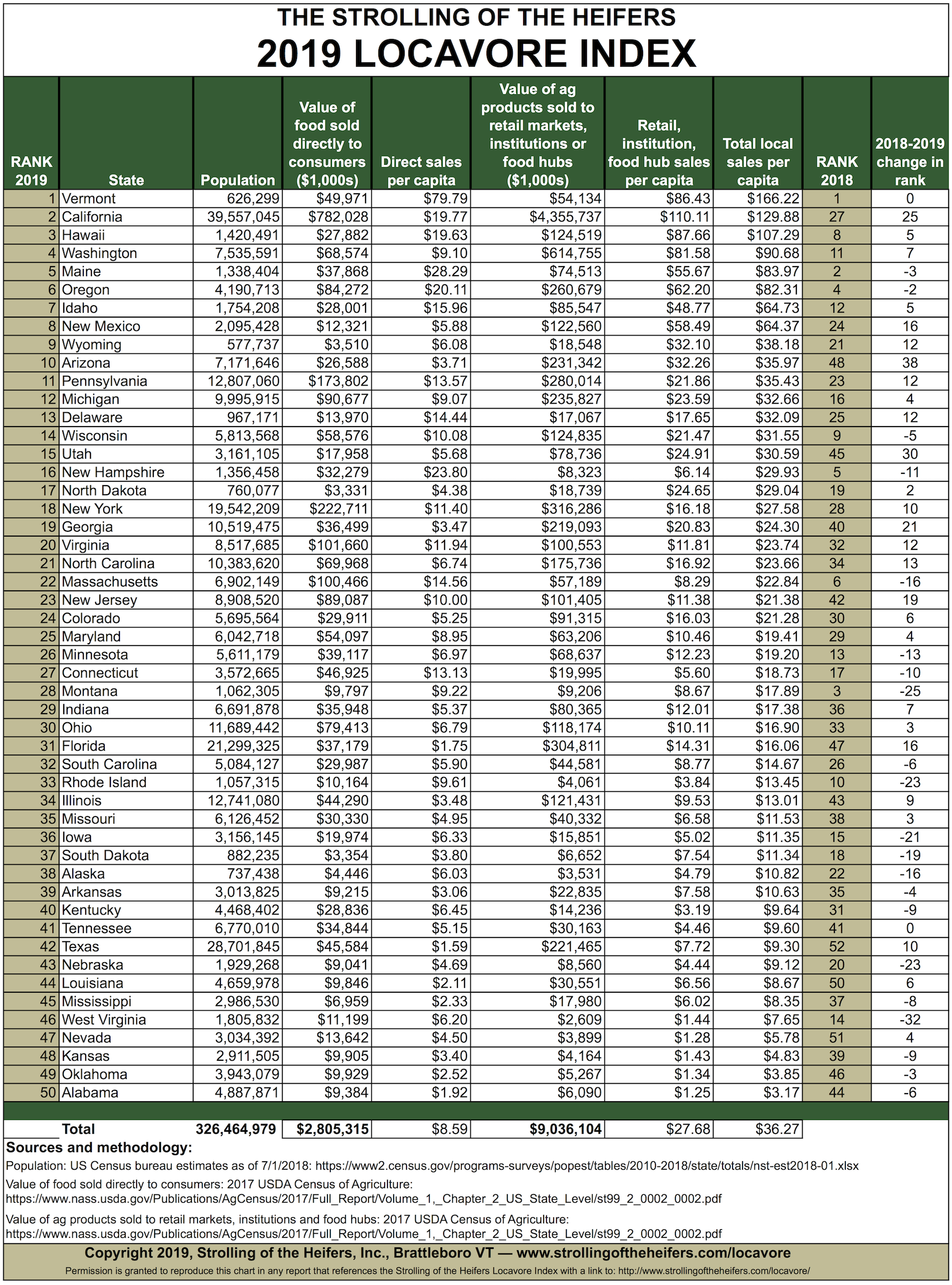 Because the Census of Agriculture doesn’t cover Puerto Rico and the District of Columbia, those areas were dropped from the Index this year.

And going forward, Strolling of the Heifers plans to update the Index only every five years, following the release of Census of Agriculture data. The next Census takes place in 2022; results, and the next Index, will be published in 2024.

Strolling of the Heifers offers 10 reasons for people to increase their use of local foods, stressing that local foods are more sustainable, healthier, better for the environment and economically positive than foods sourced from large-scale, globalized food systems.

Strolling of the Heifers’ 10 reasons to consume more local foods:

Source: Strolling of the Heifers