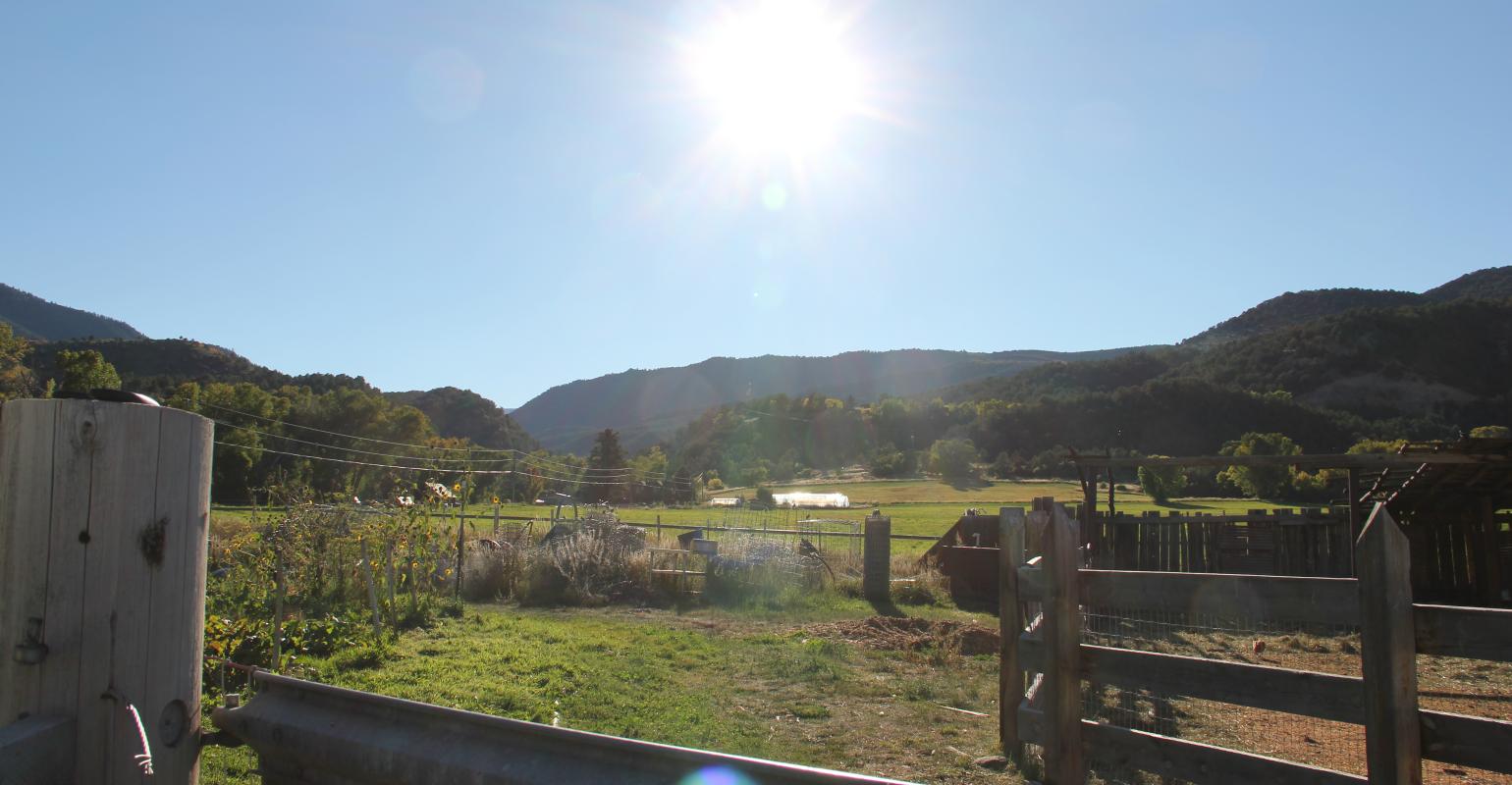 As the natural products industry increasingly highlights the importance of regenerative farming, we must also understand and consider farmer livelihood.

At the height of leaf-peeping season, when the aspens in the Colorado high country were at their most golden, I visited a 240-acre biodynamic farm called Sustainable Settings. Situated in the shadow of the 12,966-foot Mount Sopris, this Carbondale-based ranch hosts a speaker series every year. In the past it has featured high-profile thought leaders like Mary Berry, executive director of the Berry Center; Elizabeth Candelario, co-director of Demeter USA; and Woody Tasch, founder and chairman of Slow Money. Most recently, the day-long event concluded with a rollicking shindig on the farm itself that included samples of local beer, biodynamic wine, local cheese and the pinnacle of the day, a Demeter Certified biodynamic farm dinner, where nearly every item was produced within a mile radius. Live music and dancing later commenced, ensuring that everyone had a fantastic time in this beautiful setting.

But biodynamic farm dinners ain’t cheap. Each dinner ticket fetched $150, which, OK, it was an excellent meal, so it was worth it. Plus, the money served as a fundraiser for Sustainable Settings, which in addition to being a working farm with a CSA, market garden and herd-share program for raw milk, is a nonprofit. Sustainable Settings is committed to whole-systems education, and runs a litany of programs designed for people to better understand what owners Brooks and Rose Levan call ecological literacy. Offering programs for both children and adults, Sustainable Settings aims to “Equip people with a basic understanding of systems and to develop habits of mind that seek out patterns that connect human and natural systems”—a lofty, worthy goal.

The following day, I spent my morning at another farm based in Carbondale’s Roaring Fork Valley, Cedar Ridge Ranch. This family-owned farm boards horses (and provides horse-riding lessons), leases part of its land to local young farmers practicing permaculture, sells compost, and raises zebu cattle and heritage breed large black pigs. Additionally, the owners transformed one of their horse barns into a shared creative space, where photographers, potters and artists rent out monthly studios. It’s inspiring to see a ranch used as a collaborative space for so many community events.

More farms should serve as educational epicenters. Such is the reasoning behind school gardens, which can teach about growing food, yes, but also math and science. But visiting these two farms got me thinking—is it economically viable to run a small-scale organic farm? What if a farmer just wants to produce food, not host Instagram-worthy dinners, rustic-chic weddings or farm tour hayrides?

Are fundraisers and agricultural grants integral to the survival of such operations, or can a small plot of responsibly tended land actually produce a financially sustainable income?

On a fluke I ended up at another organic farm the following week—Red Wagon Farm based in East Boulder, Colorado, run by Wyatt Barnes and Amy Tisdale. Walking through the rows of organic red and yellow bell peppers, heirloom tomatoes and carrots, Barnes joked that he was a basher of dreams—young people with limited farming experience frequently sought his advice about starting sustainable farms, and he tasked himself with bringing them back to reality: organic farming is hard work. Very. Hard. Work.

In a 2015 article published at Salon.com, writer and farmer Jaclyn Moyer got real about tending her small, sustainable farm: it wasn’t exactly financially viable. “I grew 10 acres of organic vegetables, worked upward of 60 hours a week during the height of the season and my total income last year was $2,451,” she writes. “Like all the other farms I knew, my farm relied on uncompensated labor and self-exploitation. My farm was not sustainable because I knew the years my partner and I could continue to work without a viable income were numbered,” adding that the farm was kept afloat primarily by her job as a baker and her partner’s work as a carpenter.

A dive into data confirms that Moyer’s situation is pervasive among small farms. A 2013 economic report from the White House relates that small family farms, classified as those with annual sales less than $250,000, on average have a negative net profit due to high operating costs. “By 2000, 93 percent of farm households had income from off-farm sources, including off-farm wages, salaries, business income, investments and Social Security,” reads the report.

Even if small farms are in the black, farmer incomes are modest. One University of California Santa Cruz report stated that in 2011, average annual income for new farmers was $1,902, and $18,119 for established farmers.

As we continuously recount the importance of labor-intensive regenerative farming practices that build soil health, mitigate pesticide and herbicide spraying, and view farms as a holistic entity, it’s irresponsible to forget about farmer livelihood. Of course there are large farming operations that are achieving such tenets of sustainability that are dear to the natural industry and are making enough money to pay themselves and their workers a decent wage, such as Fred Kirschenmann’s 2,600-ish acre, mid-sized organic farm in North Dakota. Likewise, King Estate Winery’s recent Demeter USA certification officially makes its 1,033-acre plot the largest biodynamic vineyard in the United States.

However, small, family-owned farms are the soul of the natural movement, and if, as the Organic Trade Association identified, we need more than 1 percent of U.S. agriculture dedicated to organic farming, small farmers must thrive.

One rallying cry of the natural industry has been to get more young people to take up farming. Legislation is a good way to encourage this tactic, as farming start-up costs can be astronomical and unrealistic for many millennials who may still have student debt. Importantly, larger natural product organizations like Clif, Lexicon of Sustainability, Oregon Tilth, Woodstock Foods and more have gotten involved by partnering with the National Young Farmers Coalition, which aims to ease the financial burden on beginning farmers. Some of NYFC’s initiatives include forgiving student loans, offering tax credits to lease land and improving land access for farmers who aren’t in a position to inherit land from their families—particularly land that is closer to cities, to implement direct-to-market selling models (such as CSAs and farmers markets) where farmland is typically more expensive.

These are wildly important initiatives. But the question still stands: Can small, organic farmers make a real income through food production?

Jean-Martin Fortier, author of The Market Gardener: A Successful Grower’s Handbook for Small-Scale Organic Farming (New Society, 2014) and owner of the Quebec-based farm Les Jardins de la Grelinette, says absolutely. By cultivating vegetables on just 2 acres of permanent beds, his farm grosses $160,000 in sales—and nets 50 percent of the profit. So Fortier and his family make roughly $70,000 per year. Compared with USDA data that found most small organic farms are losing money. Incredulous, I called up Fortier to better understand his model.

“It’s just a matter of how the farm is set up design-wise, and how the markets are where you live,” explained Fortier, who said a large part of his success was that he didn’t own a tractor. Meaning, the farm was human-powered. “We don’t need a tractor because we don’t cultivate or till the soil, we don’t plow or disc harrow." He also uses alternative, non-chemical techniques for weeding.

Not only are tractors expensive, he says, they require pricey maintenance. “Everything revolves around it. You’re spending time fixing it. Once you have one, you want another one. And then you’re expanding and moving further away from your washing station to where the veggies are harvested, and wasting time.” Another time-waster: planning events outside of producing food such as farm dinners, classes, tours and more. “All of these things, they are drawing you away from being successful. They are taking up your time. You should be crop planting, you should be preparing for next year, you shouldn’t do all of this stuff—it is hard enough growing veggies.”

Fortier’s takeaway here: scale down, not up. Farm intelligently. Forget crop volumes and focus on crop quality. He must be on to something; The Market Gardener has sold 70,000 copies worldwide.

It’s inspiring to learn that with clever design and a strong market, small farms can make real money. But I can’t help but wonder if going small is the best approach for the natural products industry. Organic supply challenges are the largest inhibitor of category growth—particularly with dairy and grains. Organizations tasked with improving organic access agree. “There is an industry-wide understanding of the need to build a secure supply chain that can support demand,” reported the OTA in a March 2016 press release. “This goes hand-in-hand with securing more organic acreage, developing programs to help farmers transition to organic and encouraging new farmers to farm organically.” Plus, more organic and biodynamic acreage has its own benefits—namely, reduced use of synthetic insecticides, herbicides and fertilizers and the ability to better capture carbon from the atmosphere, and mitigate climate change.

Consequently, it would behoove us—as both consumers and leaders of the natural industry—to support small farmers with legislation that directly stabilizes their finances. Manufacturers should partner with farmers they admire and make contractual agreements in advance to better help farmers plan for growing seasons. The economic health of farmers directly correlates to the economic growth of natural products.

We’re at a point where demand for organic (and increasingly biodynamic) has skyrocketed. Consumers understand organic. They want organic. It’s our job to make sure they get it.

Biodynamic a blueprint for a healthier food future
May 20, 2016
The growth of farm-fresh cosmetics
Jul 20, 2011