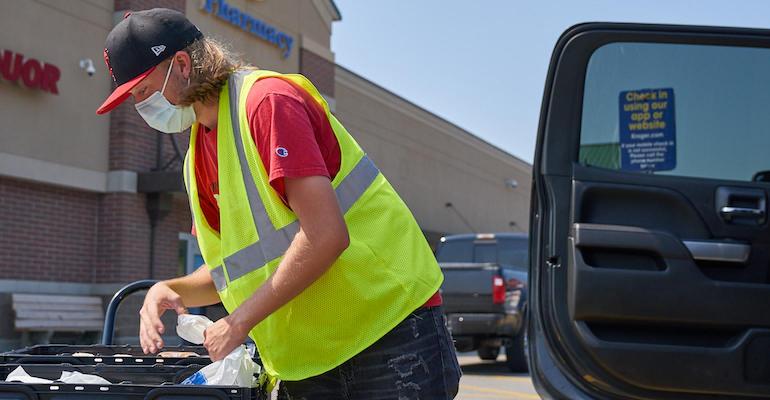 Food retailers and suppliers are being pushed to rethink their workforces after the COVID-19 pandemic and ensuing surge in online grocery shopping shook up the marketplace, a survey from FMI-The Food Industry Association and Deloitte reveals.

In assessing their labor needs going forward, nearly half (48%) of food retailers polled cited online shopping as the chief driver of change, according to the FMI-Deloitte “Future of Work: The State of the Food Industry” study, released Tuesday. Retailers’ response to the growth of e-grocery, in turn, is trickling down to product suppliers, as 49% of those surveyed said they’re adapting their workforces to meet new demands from retailers.

Findings from FMI and Deloitte’s “Future of Work” report come from an April/May 2021 survey of more than 150 U.S.-based executives from consumer packaged goods, food manufacturing and processing, grocery and food retail companies, as well as from interviews with industry leaders, FMI said.

“As we witness in this new study with Deloitte on the future of our workforce, the food industry can and should continue to rally around the strategies and investments it employed during the pandemic to keep customers and their essential workforce safe and America fed,” Mark Baum, senior vice president of industry relations and chief collaboration officer at FMI, said in a statement.

More than 90% of food retailers and product suppliers polled said their companies are investing in the “future of work,” though competing priorities have fewer than one in five respondents making significant investments to that end, the FMI-Deloitte research found. For food industry workforce initiatives, growing market share was cited as the No. 1 goal, yet 41% of companies indicated they aim to foster an organizational culture focused not just on growth but also adaptability and resilience.

“During the pandemic, it was all-hands-on-deck to meet consumer demand. Now the food industry is looking to drive performance and business outcomes through future of work initiatives,” explained Barb Renner, vice chairman and U.S. consumer products leader at New York-based Deloitte LLP.

Both food retailers and suppliers identified talent availability and retention—spanning varying job roles across the industry—as their top workforce challenges. Food retailers named talent availability (44%) as their most pressing challenge, followed by talent retention (40%), and retraining and re-skilling employees for new technology (39%). For suppliers, talent retention and driving company culture were the leading concerns (45%), followed by drawing employees with emerging, high-demand skillsets (36%).

To aid talent attraction and retention, 59% of food industry executives agreed that flexible and hybrid work options, where possible, will be pivotal. And as technology demands rise, food retailers are focusing on retraining workers and boosting their skills, whereas product suppliers lean more toward hiring people with high-demand skills, according to the study. 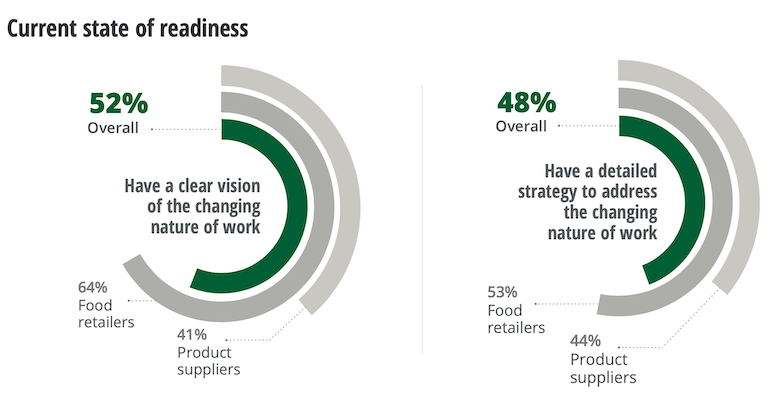 “At a time when many industries suffered devastating job losses, the grocery industry has served as a source for occupations for hundreds of thousands of Americans,” Baum noted. “Yet FMI’s operations data suggest that turnover in food retail was 40% before the pandemic, [and] 46% said COVID-19 made it harder to recruit and retain people. Retailers told us they addressed this tension by focusing on a range of benefits for associates, including higher compensation, bonuses, flextime, training and skills development, employee wellness programs, education programs, and hiring and retention incentives.”

Seventy percent of companies surveyed have tasked their talent and human resources executives with driving future of work initiatives, compared with 44% that have their CEO leading these efforts, the report said. More than 25% said workforce development efforts are being spurred by IT, operations and/or line-of-business leaders.

Nine in 10 companies are investing in future of work-related initiatives such as retraining employees to use new technology. Improving the customer experience also is a priority, cited by 39% of food retailers polled and 27% of industry executives overall. Driving innovation, adding capacity and cutting costs were each named as key goals by 7% of companies.

Almost half (46%) of executives said their companies are “ready” or “very ready” for work in the “new normal” following the pandemic. Still, just two in 10 food retailers and one in 10 suppliers described their investments as significant, FMI and Deloitte found. Forty-eight percent said other priorities limit their future of work investment, and 8% pointed to limited financial capital.

“The food industry is a complex system, and no single company is going to be able to get their fully realized vision of the future of work on their own and will require collaboration with their suppliers, partners and other industry participants,” according to Renner. “Grocers and product suppliers should lay the groundwork for the future together, and the companies that invest in a people-centric approach by prioritizing the work, workforce and workplace will be better positioned to adapt to shifting consumer preferences and long-term growth.”

US online grocery sales swing back up in August
Sep 16, 2021