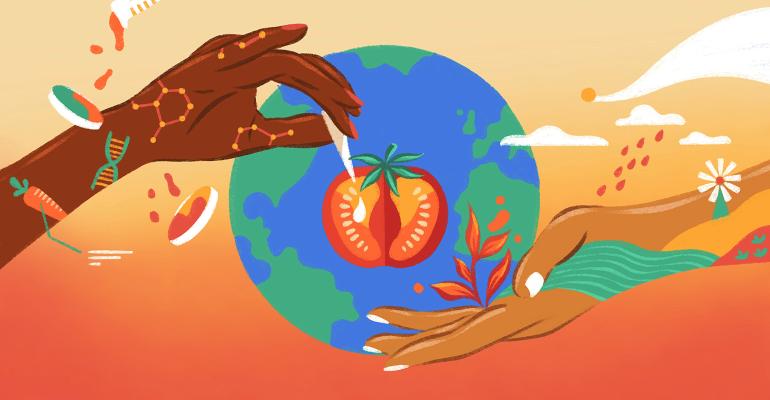 New Hope Network encourages its community members to share open and transparent dialogue about issues that are impacting the food industry and its future. Please help us keep this conversation going. If you’re interested in sharing your opinions on the future of food, email Jessica Rubino at [email protected]. All opinions are welcome.

The two most common GMO crops are herbicide-/glyphosate-tolerant soybeans and insect-resistant corn. Neither of those crops are providing increased nutrition to consumers. As farming in the United States has turned to growing herbicide-resistant plants, herbicide use on those crops increased 527 million pounds between 1996 and 2011 when compared with herbicide use on non-resistant plants. Most of that increase was attributed to glyphosate, according to a 2012 study, “Impacts of genetically engineered crops on pesticide use in the U.S.”

From 1996 to 2001, pesticide use on U.S. farms decreased as crops such as corn, soybeans and cotton transitioned to genetically engineered plants to resist certain insects, the same study found. In 2002, however, pesticide usage began to increase. From 1996 to 2011, farmers used an additional 404 million pounds of pesticides on genetically engineered crops than they would have used on non-GMO plants. The majority of genetically modified corn and soybeans are used for animal feed, not human food, so the claim of feeding the world has also proven to be false.

Related: The Future of Food: The regenerative imperative

Today, similar claims are being made about the next generation of GMOs, or GMO 2.0, those produced by gene editing and synthetic biology. An article in National Geographic states that gene editing “has the potential to change the foods we eat every day, boosting flavor, disease resistance and yields, and even tackling allergens like gluten.” On its website under “Feeding the World,” synthetic biology company Ginkgo Bioworks claims it is “working towards a future where genetic engineering can help make foods that are sustainable, healthier, delicious, and accessible to everyone.”

But in its Sept. 30, 2021, SEC filing's disclosure of the risks of its technology, Ginkgo Bioworks tells a different story: “The genetically engineered organisms and materials that we develop may have significantly altered characteristics compared to those found in the wild, and the full effects of deployment or release of our genetically engineered organisms and materials into uncontrolled environments may be unknown… Such deployment or release… could impact the environment or the health and safety of our employees, our customers’ employees, and the consumers of our customers’ products.”

Then there is the issue of the biowaste produced from synthetic biology’s precision fermentation process. According to a paper from the Environmental Health Symposium, approximately 90% of the total biomass used to create synbio products ends up as waste and has to be “deactivated.” How will that happen and where will billions of tons of the potentially toxic waste be stored?

Again, from Ginkgo Bioworks’ risk disclosure: “We cannot eliminate the risk of (a) accidental or intentional injury or (b) release, or contamination from these materials or wastes, which could expose us to liability.” 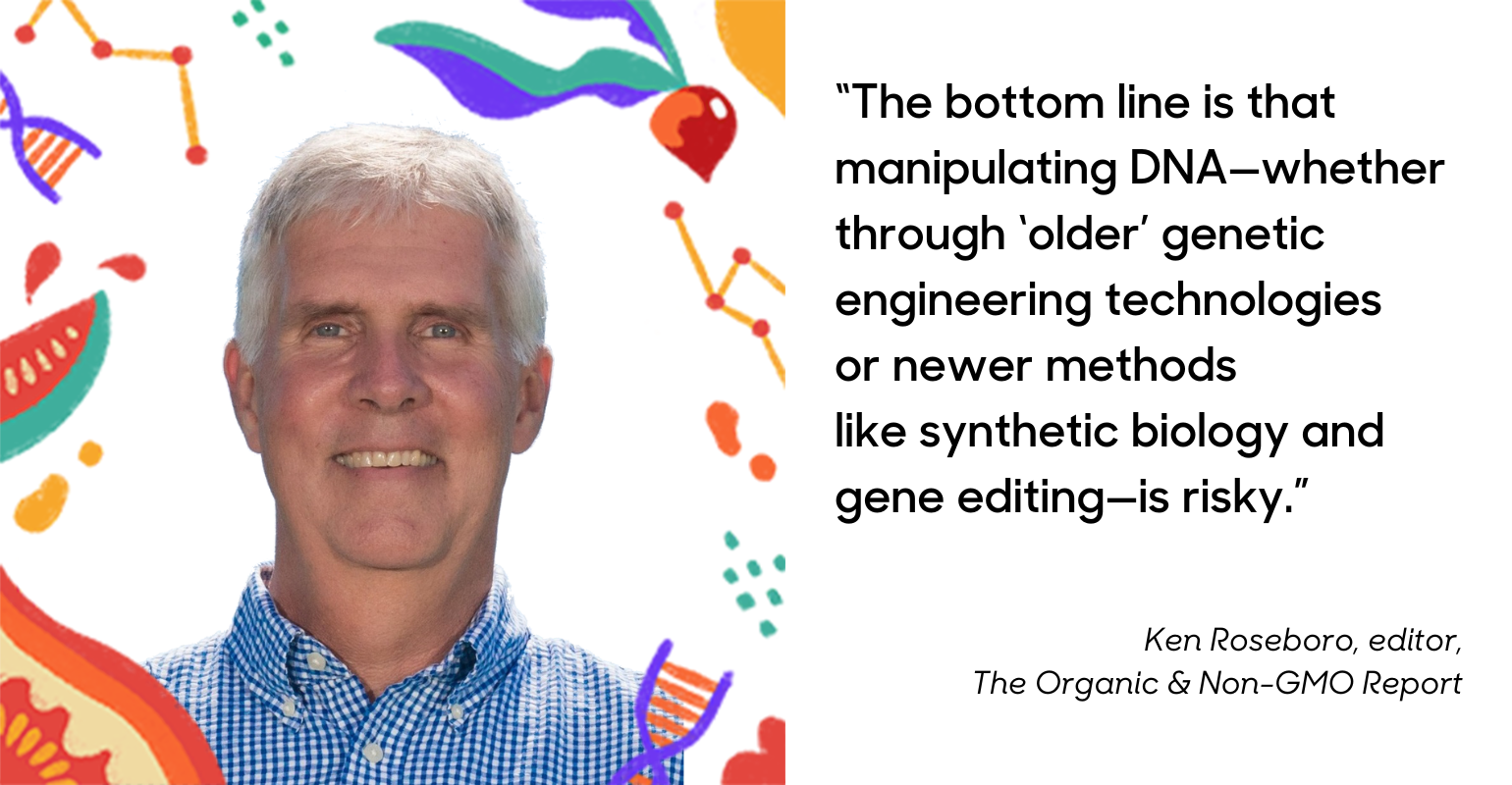 The fermentation of synthetic biology requires a feedstock, similar to the barley needed for brewing beer, and many synbio companies use dextrose from GMO corn. During September's Future of Food virtual forum organized by New Hope Network, Shlomit Delouya, head of communication at synbio company Remilk, emphasized that her company was committed to addressing concerns about synbio technology in a transparent way. Yet, when food industry consultant Errol Schweizer asked Delouya what feedstock the company uses in their synbio process she replied that she couldn’t say. Not a good start to being transparent.

There are also social concerns. Synbio companies like Evolva that make synthetic biology flavors like vanillin are hurting the market for natural vanilla produced by smallholder farming communities in Madagascar.

“These companies are trying to disrupt those markets and take that value,” says Jim Thomas, program director at the ETC Group, a non-profit advocacy group that tracks the new GMO technologies. “If you can produce vanillin, then you will start affecting the supply chains and livelihoods of vanilla farmers.”

No labeling of synbio products will be required by the new National Bioengineered Food Disclosure Standard, so consumers will have no idea they are buying such products.

“The overriding drive in development is to be able to use the techniques without saying they are GMO,”  Thomas says.

Some companies are even calling their synbio products “non GMO.” Calyxt has labeled oil made from its gene edited high oleic soybeans as non-GMO. Cibus claims that its gene-edited herbicide-tolerant canola is non-transgenic. On its website Brave Robot ice creams claims that its ice cream “does not contain GMOs.”

“No one in the world believes gene-edited products are non-GMO except the companies trying to sell them,” says Hans Eisenbeis, communication director at The Non-GMO Project, which has been tracking the new GMO products.

The Non-GMO Project’s standard prohibits products made using synbio technologies from being verified as non-GMO.

The bottom line is that manipulating DNA—whether through “older” genetic engineering technologies or newer methods like synthetic biology and gene editing—is risky.

Synbio companies claim their products will help mitigate climate change because animal agriculture—with its massive feedlots and confined animal feeding operations—is the second largest contributor to human-made greenhouse gas emissions after fossil fuels. It is also a leading cause of deforestation, water pollution and biodiversity loss.

With their lab-made products, synbio companies say they can produce alternative protein products without damaging the climate and ecosystem.

But we already have safe, effective, and proven methods to mitigate climate change, build soil health, protect the environment and produce nutrient dense foods: organic and regenerative agriculture. Published studies have shown that regenerative and organic farming methods sequester the carbon responsible for climate change. These methods are also helping to rebuild the world’s soils and building soil health, which produces more nutritious foods. The link between soil health and human health is increasingly being revealed, most recently in a new book, What Your Food Ate: How to Heal Our Land and Reclaim Our Health by geologist David R. Montgomery and biologist Anne Biklé.

Why rely on promises from an industry that has a bad record of delivering on them when proven solutions to mitigating climate change and producing more nutritious foods are already available?

Ken Roseboro is editor of The Organic & Non-GMO Report,

The Future of Food: Letter to the natural products industry
Jan 06, 2023