Organic egg sales grow, but not quite sunny side up 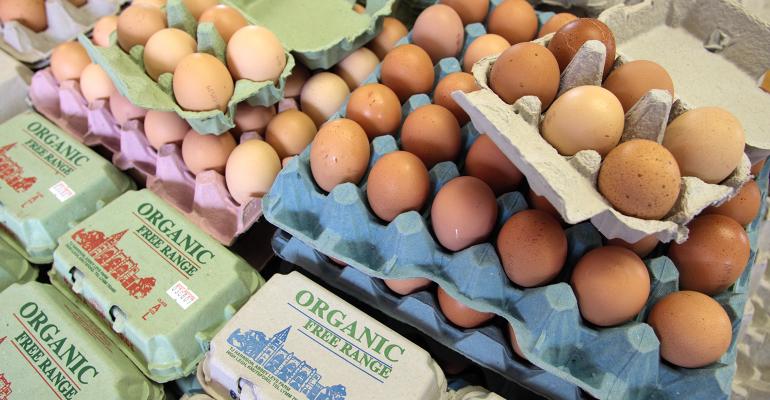 This piece is part of the Good Food Insights series—a collaboration with FamilyFarmed, its Good Food Accelerator, Esca Bona and SPINS—that unpacks the dynamics driving the good food movement.

Like most organic food sectors, organic eggs are producing healthy sales growth. But unlike many categories, organic egg sales are not rising faster than their conventional counterparts.

A study by SPINS—the leading provider of data insights in the natural products industry—found that overall egg sales in tracked retail outlets boomed by 15 percent in the 52-week period ending Feb. 24, 2019. This was a huge jump from the 2 percent growth over the previous year.

Related: Grazing in the grass is growing fast

This rapid rise is attributable, at least in part, to the fact that much of the medical research community has very recently stepped back from its decades-old warnings that eggs carry a high risk of elevated cholesterol and heart disease.

“Eggs are just so applicable to everyone,” said Alice Mintz, senior manager of SPINS’ Strategic Partners Group. “They're able to be eaten in many different forms. People can customize them. They're relatively inexpensive and pack a big nutritious punch. So this is a space that is meeting a lot of consumer needs.”

But organic eggs (which coincidentally make up 15 percent of the overall refrigerated egg retail market) grew by 11 percent over that period—lagging behind overall sales growth by 4 percentage points.

There is no single reason identified for this disparity, but it is clear that organic eggs have emerged as one of the most controversial topics in the good food and animal welfare communities. Far from the bucolic image that many consumers have when they hear “organic,” many organic eggs are produced by factory farms with crowded conditions similar to those on conventional farms.

The Cornucopia Institute in Cornucopia, Wisconsin, has played a vocal role in drawing national attention to this issue. In its report titled "Scrambled Eggs: Separating Factory Farm Egg Production From Authentic Organic Agriculture," the institute wrote, “For most consumers, and many producers, ‘organic farming’ means respecting the underlying principles of the organic movement, such as building soil fertility, maintaining ecological balance, promoting biodiversity, reducing dependence on off-farm inputs, recycling nutrients, and allowing livestock to display their naturally instinctive behaviors.”

The report continued, “For others, especially large-scale producers, ‘organic’ appears to be nothing more than a profitable marketing term to apply to the agro-industrial production model, simply substituting organic feed for conventional and eliminating prohibited synthetic inputs, such as pesticides and antibiotics.” 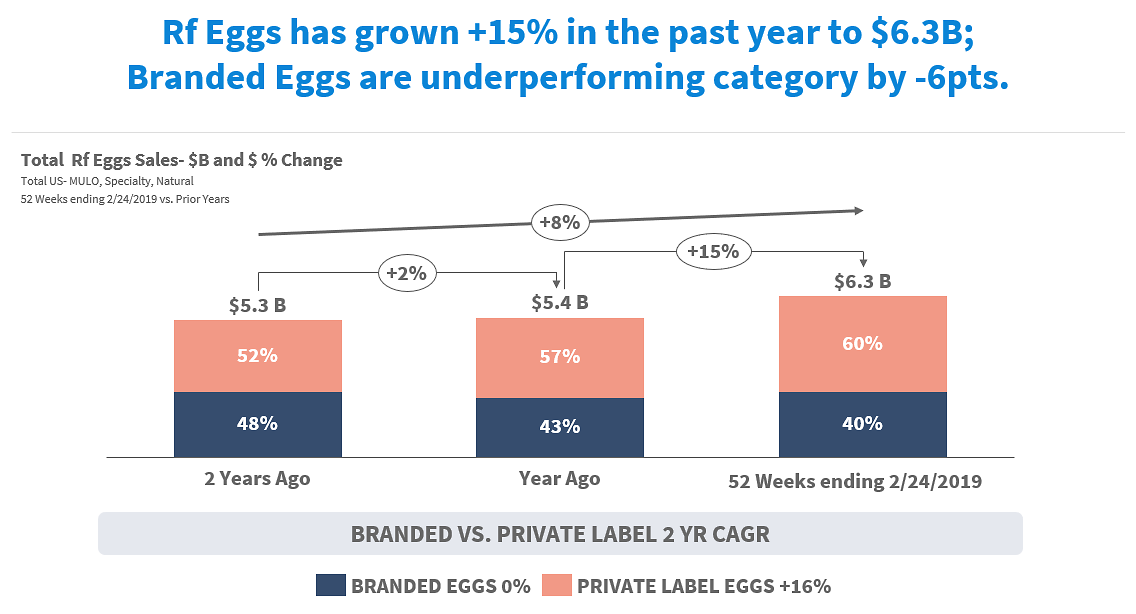 Concerns about these practices almost led to a major change in federal animal welfare policy. After years of discussion, the U.S. Department of Agriculture published regulations in January 2017 that would have strengthened protections for organically raised livestock, with requirements that chickens be given more space in barns and outdoor access to vegetated land (not just fenced-in patios, a common practice in the poultry industry). But the Trump administration shelved these regulations in March 2018.

Nonetheless, the Cornucopia Report and resultant media coverage have raised skepticism among some consumers about whether they are getting what they think they paid for (because organic eggs tend to be more expensive than nonorganic). Organic eggs are following a pattern that also has affected sales growth of eggs labeled as cage free, another certification that in many cases has proven to be less than it was cracked up to be.

SPINS found that among branded refrigerated eggs, cage-free egg sales grew by 6 percent in the year ending Feb. 24, while organic egg sales grew 9 percent. The momentum has shifted dramatically to the certification that consumers increasingly trust to provide livestock with an amenable lifestyle: pasture raised, with branded eggs in that category growing at an astronomical 44 percent rate.

“You see the higher degree of animal friendliness is growing the fastest, and that's a really great thing,” Mintz said. “I think it's just the public knowledge, it's just what are people prioritizing.”

“Organic is a great starting point, but it isn't fool-proof. You can be certified and cut a lot of corners, and that's what we are seeing these large operations do,” said Alden Farms farmer Levi Powers.

He added, “We move our chickens in a mobile greenhouse every day. This ensures that they are getting fresh forage every day and that we are building our soil health with manure as we go. This is important part of how we farm because we are constantly trying to work with nature instead of control it.”

Just as in the fast-rising sector of pasture-raised meat (the subject of the Good Food Insights article published in April 2019), there are multiple reasons why pasture-raised egg sales are soaring.

There are those who believe taste alone is a big selling point for pasture-raised eggs.

“Meat is always going to take on the flavor of its environment and eggs are no different,” Powers said. “There will be a deeper flavor with pasture-raised eggs since they are being exposed to more complex diets. … When you have an animal out on pasture every day, eating bugs, being in the sunshine and eating grasses, it makes for a fantastic, healthy end product.” 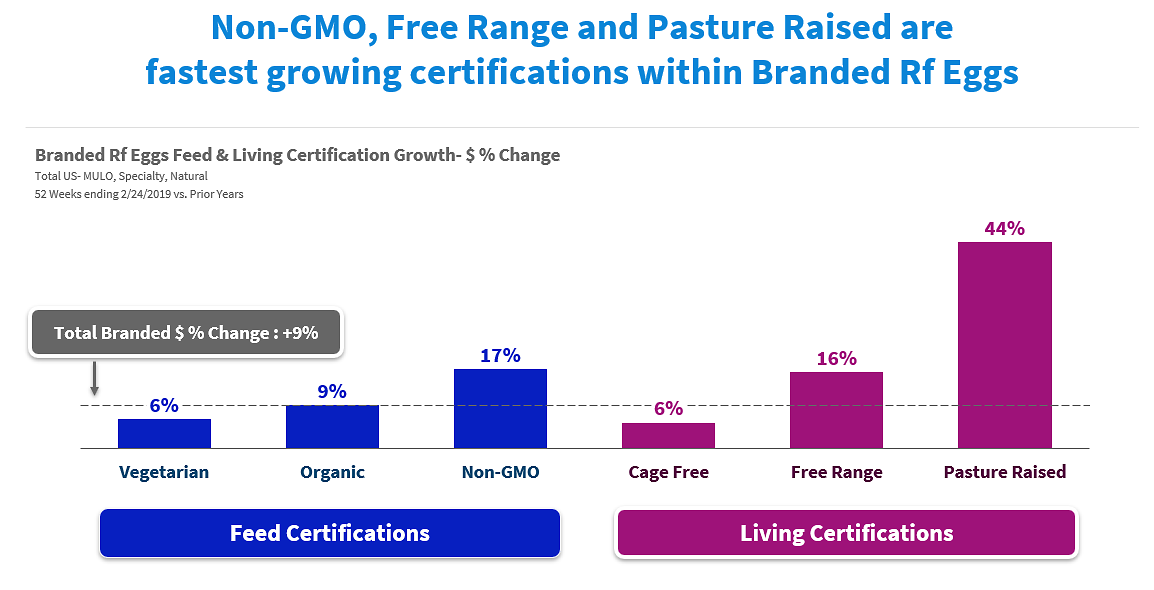 Price “rarely comes up as we regularly sell out of our eggs,” he said. “When it does, we explain that to get the best, you have to pay a premium for it. We work very hard to ensure that we raise the best eggs possible, and it’s OK to be rewarded for that work.”

That equation can be more challenging for branded sustainable egg producers who share crowded supermarket space with less expensive conventional and organic factory-farmed eggs; they also face the phenomenon that private label egg sales are growing much faster than those for branded eggs.

Innovative marketing is the solution reached by a number of producers. For example, Vital Farms, a producer based in Austin, Texas, that distributes nationally in major retail chains, uses colorful and creative labels that also aim to educate consumers about the advantages of pasture raised.

“It's clear that if you're committed to it, people can sense the authenticity,” Mintz said. “They know that you're in it for the right reasons, and it's really resonating with people.”