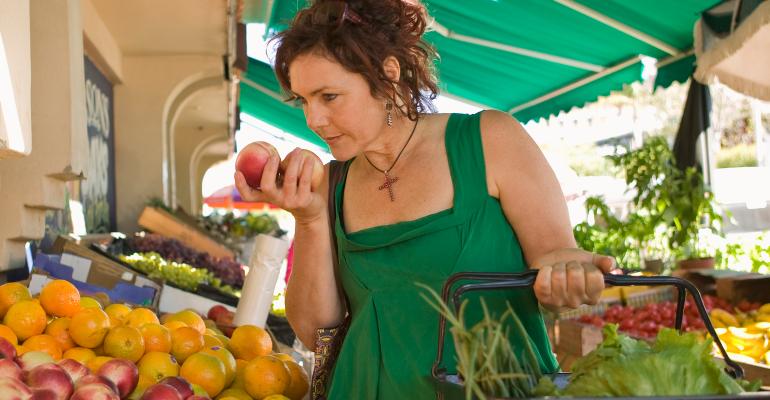 The robust American organic sector stayed on its upward trajectory in 2016, gaining new market share and shattering records, as consumers across the United States ate and used more organic products than ever before, according to the Organic Trade Association’s (OTA’s) 2017 Organic Industry Survey released Wednesday at OTA’s Annual Policy Conference.

Organic sales in the United States totaled about $47 billion in 2016, reflecting new sales of almost $3.7 billion from the previous year. The $43 billion in organic food sales marked the first time the American organic food market has broken past the $40 billion mark. Organic food now accounts for more than 5 percent—5.3 percent to be exact—of total food sales in this country, another significant first for organic.

Organic food sales increased by 8.4 percent, or $3.3 billion, from the previous year, blowing out the stagnant 0.6 percent growth rate in the overall food market. Sales of organic non-food products were up 8.8 percent in 2016, also handily surpassing the overall non-food growth rate of 0.8 percent.

The survey also showed that organic is creating jobs. More than 60 percent of all organic businesses with more than five employees reported an increase of full-time employment during 2016, and said they planned to continue boosting their full-time work staff in 2017.

“The organic industry continues to be a real bright spot in the food and ag economy, both at the farm-gate and check-out counter,” said OTA’s CEO and Executive Director Laura Batcha.

“The theme of our conference is ‘Organic. Big Results from Small Seeds’ because of the wide and positive impact of organic,” noted Batcha. “Organic farmers are not just staying in business, they’re often expanding. Organic handling, manufacturing and processing facilities are being opened, enlarged and retooled. Organic farms, suppliers and handlers are creating jobs across the country, and the organic sector is growing and creating the kinds of healthy, environmentally friendly products that consumers are increasingly demanding.”

The popularity of produce and protein

Produce has traditionally been the entry category for consumers new to organic, in large part because in the produce aisle the benefits of organic are probably the easiest to understand. We touch the fruit or vegetable, smell it, and immediately make that connection between that carrot, for example, growing in clean healthy soils and putting it into our bodies. Across all organic food categories, shoppers are placing high value on freshness and convenience. In produce, grab-and-go salads and ready-to-eat veggies (fresh or frozen), were top sellers.

Consumers in recent years have sought clean products abundant in protein, and sales of organic protein-rich meat and poultry shot up by more than 17 percent in 2016 to $991 million, for the category’s biggest-ever yearly gain. Continued strong growth in that category should push sales across the $1 billion mark for the first time in 2017. Growing awareness of organic’s more encompassing benefits over natural, grass-fed or hormone-free meats and poultry is also spurring consumer interest in organic meat and poultry aisles.

So what is that organic produce being dipped in and that organic meat and poultry being seasoned with? Organic dips and seasonings, of course!

The organic condiment category isn’t one of the headline organic food categories, but some interesting trends are happening there nonetheless. Organic dips, for one, posted stellar growth in 2016 of a whopping 41 percent, with $57 million in sales. And sales of organic spices swelled by a big 35 percent to $193 million.

Beyond food—sales of organic items outside food section keep climbing

Sales of non-food organic products increased by almost 9 percent to $3.9 billion. Organic fiber, supplements and personal care products accounted for the bulk of those sales. Adequate supplies of organic textiles are a continuing challenge in the organic fiber market. However, U.S. organic cotton farmers produced a record 17,000-plus bales in 2016, which should help alleviate some supply concerns.

Increasing consumer awareness that what we put on our body is as important as what we put in our body is driving the growth in organic fiber sales, while a growing desire in transparency, clean ingredients and plant-based products is spurring sales of organic supplements and personal care products.

Challenges to maintain the organic momentum

“Organic products of all sorts are now found in the majority of kitchens and households across our country,” said Batcha. “But the organic sector is facing challenges to continue its growth. We need more organic farmers in this country to meet our growing organic demand, and the organic sector needs to have the necessary tools to grow and compete on a level playing field. That means federal, state and local programs that help support organic research, and provide the organic farmer with a fully equipped tool kit to be successful.”

OTA’s 2017 Organic Industry Survey was conducted and produced on behalf of OTA by Nutrition Business Journal (NBJ). The survey was conducted from Feb. 2, 2017, through March 31, 2017. More than 200 companies responded to the survey. Executive summaries of the survey are available upon request. The full report can be purchased, and online orders can be placed on this page.