HomeMarket Data and AnalysisShoppers stock up on indulgent treats for comfort during COVID-19 crisis
Recent
Latest
4 tips to get ahead of chemical concerns in packaging
May 20, 2022
7 CBD favorites in the increasingly popular gummies format
May 20, 2022
Mission MightyMe helps parents introduce allergens to babies
May 20, 2022
UNFI's Eric Dorne to step down as chief operating officer
May 20, 2022
Trending
Whole Foods' honors 30 companies with 10th annual Supplier Awards
May 18, 2022
Sponsored Content
The rise of sustainable business – eGuide
Sponsored Content
Getting ready for 2023: Trends for brands to consider
May 17, 2022
Sponsored Content
Unboxed: 7 plant-forward ice creams to stock this summer
May 10, 2022 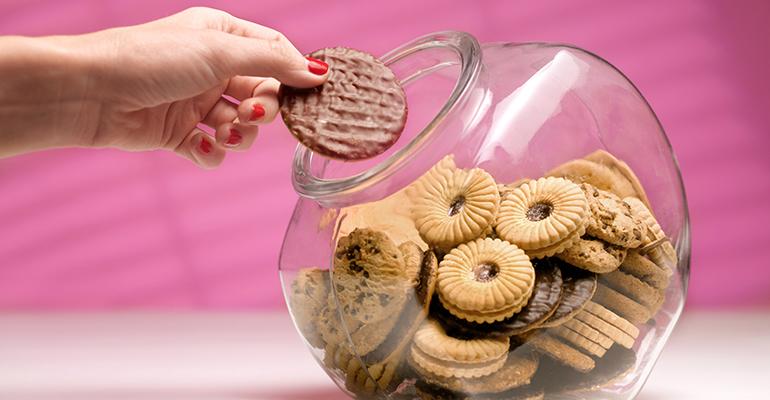 U.S. consumers have historically turned to snack foods to soothe themselves during challenging times, but this behavior has reached new heights during the COVID-19 pandemic.

U.S. consumers have a tendency to turn to snack foods for comfort and enjoyment during trying tmes. Given both the economic and well-being stressors related to COVID-19, indulgent snacking is playing an even more important role right now. Snack food consumption has increased by 8% during the pandemic as consumers seek comfort through savory and sweet snacks, according to NPD's Snack Food Behaviors in Challenging Times study. During the Great Recession, between 2008 and 2010, snack food consumption increased by 4.8 billion eatings, a 1% increase.

In April, when shelter-at-home orders were most strict, 37% of consumers told NPD they wanted to make sure they had sufficient snack foods on hand. They were well stocked on salty snacks and frozen sweets more than other items. Also, in many cases, the more snack food packages in the home, the more frequently the item is consumed; this tends to be especially true of certain types of snack foods. For example, consumers who have five or more packages of crackers or salty snacks consume those foods at higher rates than consumers with fewer packages in their homes.

"We've seen consumers turn to indulgent snack foods in other challenging times, and although history isn't repeating itself during COVID, it is rhyming," says Darren Seifer, NPD's food and beverage industry analyst. "Although we can't predict what's going to happen in the future, I think it's safe to say snack food manufacturers and retailers can expect elevated snack food usage while COVID-19 restricts our restaurant usage and overall movement, in particular school closings and work from home orders."