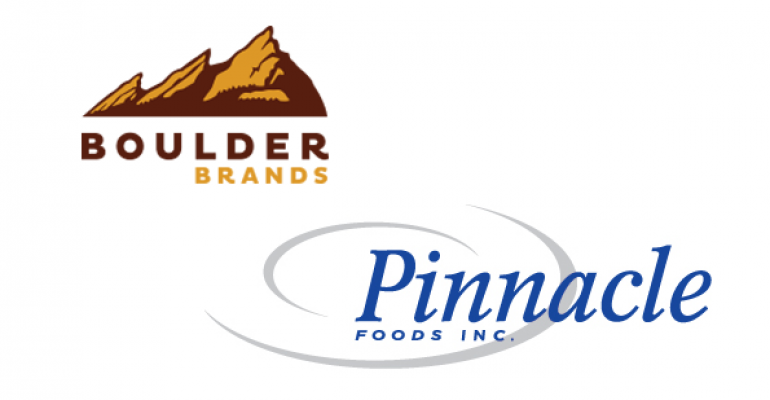 &quot;I think they are paying a good price for a bit of a challenged asset,&quot; says Rodney Clark, managing partner at Aspect Consumer Partners.

The potential buyer that Boulder Brands hinted at this summer was apparently Pinnacle Food, which just bought the natural food company in a deal valued at $975 million.

Pinnacle owns frozen brands Mrs. Paul’s, Birds Eye, Hungry-Man, Van de Kamp’s and Gardein, as well as shelf-stable food brands including Aunt Jemima, Duncan Hines, Wish-Bone and Lender’s. According to a statement from the company, it sees the Boulder Brands buy as a way to expand its health and wellness portfolio.

If that sounds familiar, it’s because this is the latest in a slew of recent acquisitions of brands with strong natural and organic product portfolios by major mainstream food companies. However, Pinnacle/Boulder Brands is far from a textbook example of big companies shopping for small brands, says Rodney Clark, managing partner at Aspect Consumer Partners. Clark calls Boulder Brands a "fixer upper" and says the use of the word "synergies" in a press release announcing the deal is a sign that the larger companies has "work to do."

"I think they are paying a good price for a bit of a challenged asset," Clark says.

For Boulder Brands, this year has been a turbulent one. Grappling with a struggling Smart Balance brand and increased competition in the gluten-free sector, the company this summer reported a decline in quarterly sales and saw the resignation of former CEO Steve Hughes, who at the time said he believed it was “the right time for a leadership transition.” It also announced a restructuring and staff cut.

In a call with analysts, Pinnacle Foods CEO Bob Gamgort said he sees opportunity to tap a younger customer base, shift further into on-trend categories and tap the talent pool in Boulder, Colorado, where the Boulder Brands office will be retained. David Thibodeau, managing director at Wellvest Capital, says companies like Pinnacle have little choice but to shop for such situations. The acquisition gives it multiple brands to appeal to shoppers who are moving away from brands like Pinnacle's Swanson frozen foods. "These companies have to evolve," Thibodeau says. "Their growth is not going to come from Duncan Hines or Aunt Jemima."

Boulder Brands, which owns the Evol Foods, Udi’s and Earth Balance brands, reported net sales of around $516 million in 2014. Gluten-free comprises about 50 percent of the Boulder Brands portfolio, which raised concern among some analysts on the call.

“Make no mistake, this is not a fad, it is a sustainable trend that is driven by a real consumer need,” Gamgort said after citing the $11 billion in gluten-free category sales and its 6.5 percent piece of overall food sales, as well as the continued growth of celiac diagnoses.

The deal with Pinnacle is expected to close in the first quarter of 2016. Boulder Brands stock was up more than 8 percent this morning, while Pinnacle Foods was down 3.89 percent.

Thibodeau says Boulder Brands got a good price. The deal is roughly 2X revenues, which is far lower than General Mills paying 4X revenues in the $820 million Annie's acquisition last year. But he cautions that companies can't use remarkable deals like Annie's as a gauge. "Annies was an exception," Thibodeau says. "Annie's had a lot more momentum."

Clark calls the revenue ratio on the low end of recent acquisitions in natural, but appropriate nonetheless. “Any time you are right around that two-times revenue target, that’s a good solid day,” Clark says. Troubles at Boulder Brands might even by overstated, he notes, but the Wall Street lens typically focuses on bad news. “They've stumbled and had some challenges, and Pinnacle is making a bet that they can take on that work.”

That kind of bet is routine, says Ryan Caldbeck, CEO at the CircleUp investment group, but it's also troubling. Big companies investing in smaller brands does not automatically mean a pivot to a long-term goal of healthier food. "The Pinnacle deal is about cutting costs," Caldbeck says. "It's not about innovation."

At some point, Caldbeck says, big companies have to realize that buying smaller brands and making them more efficient is not really about growth. “That strategy is a flawed strategy," Caldbeck says. "You can’t cut costs forever.”