What once was an off-priced vitamin brand is now a supplement story for the record books. The year 2012 was a big one for Schiff Nutrition, formerly of the ticker SHF on the New York Stock Exchange and now part and parcel of Reckitt Benckiser’s global family of businesses. So what happened? There was a ticker change back in May to distance the “new” Schiff from the old one tied more directly to the Weider family, but wait, wasn’t there something else? Ah! That bidding war for the entire company that left Bayer defeated and pushed valuations—already frothy by some accounts—to über-frothy levels in the nutrition industry.

Schiff is home to such popular supplement brands as MegaRed, a krill oil omega-3 play with great momentum through Costco and the club channel, and Move Free, a longstanding line of joint health products. Back in October 2010, TPG Growth bought 25% of Schiff for $48.8 million from Weider Health & Fitness, and together the two entities retained 85% of the voting rights. In February 2011, the company appointed Tarang Amin as its new CEO, bringing his 20 years of consumer products experience into the supplement mix. Amin cut his chops earlier in his career at Clorox and Procter & Gamble.

Amin began to reposition the company quickly, adding strong brands in digestive health—Schiff acquired the OTC lines Sustenex and Digestive Advantage from Ganeden in June 2011 for $40 million—and immunity—Schiff then acquired Airborne for $150 million in cash in March 2012, close on the heels of Pfizer’s acquisition of Alacer. It’s these moves to compound the brand portfolio that really caught the attention of some big fish in conventional products looking to enter the natural space. 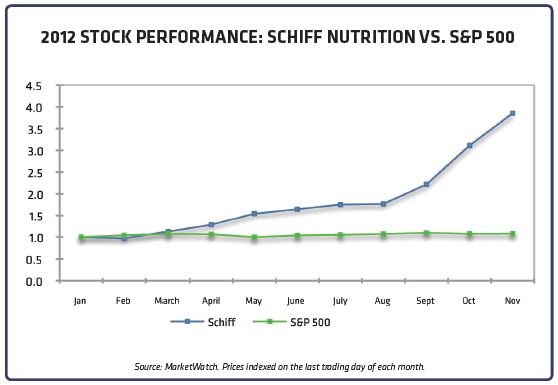 “If it had just been Schiff, this wouldn't have happened,” says Scott Van Winkle of Canaccord Genuity. “Schiff was a sleepy little company a couple of years ago before Tarang came in. With the acquisition of Airborne, Schiff put itself in an entirely different position.”

Indeed. Bayer, still looking for a stronger toehold in supplements, offered $1.2 billion for Schiff in October—$34 per share—only to watch the class-action lawyers circle over a too-quiet bidding process. Then, a few weeks later in November, a British company named Reckitt Benckiser swooped in with $42 per share. Reckitt, home to such U.S. brands as Mucinex, Delsym and Durex condoms, would ultimately prevail at that price and the $1.4 billion valuation, placing such lofty multiples on Schiff as close to 30x EBITDA. “I don't know that I could mathematically justify the prices being paid in the industry now,” says Van Winkle, “but I do recognize that peer valuations are rising rapidly. It’s just a great tear of good, consistent growth for the industry, and Schiff redefined itself at the perfect time.”

That might be the ultimate lesson here—timing. Amin’s instincts for consumer brands and his confidence in adding muscle to Schiff ’s portfolio translated into fairly rapid and impressive wealth creation for such a fresh CEO. The timing was just right for this. Bayer wanted in, Emergen-C and Airborne further whet some big appetites, and a wild volley from across the pond sealed the deal. That sleepy little company we once knew as Schiff Nutrition saw its stock jump from intra-year lows under $10 to its last hoorah at $42 per share before disappearing from the exchange in mid-December. That’s a 293% return in calendar year 2012, and ample reason for Schiff Nutrition to win this year’s stock performance award from NBJ.