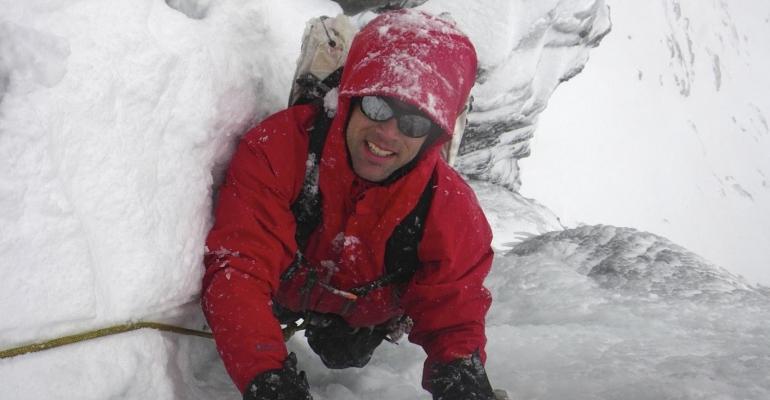 We all have challenges. The Natural Products Expo West keynote speaker, an accomplished athlete and the only blind person to climb Mount Everest, shares universal lessons from overcoming his.

Erik Weihenmayer is a celebrated and accomplished athlete, and is the founder of No Barriers, an organization dedicated to empowering participants to tap into the human spirit, break through barriers and contribute to the world. He is the only blind person in history to ever climb Mount Everest, and he has climbed all Seven Summits—the tallest peak on each of the seven continents—and is the author of two bestselling books.

Weihenmayer shared some of his inspirational story with Natural Foods Merchandiser ahead of his Saturday keynote address at Natural Products Expo West 2016.

Natural Foods Merchandiser: How did your interest in rock climbing start, and why is it a passion of yours?

Erik Weihenmayer: When I was a kid, I couldn’t see. And while I liked traditional sports, getting hit in the head with a baseball wasn’t working out for me! I went rock climbing at age 16 for the first time, not knowing whether or not I would like it, but I tried it and it was amazing. It was an adventure, and it was something I could do. In a weird way, it is a great sport for a blind person because the rock doesn’t move—you can feel your way up and problem solve your way up, and connect the dots to go from point A to point B to point C. That first rock climbing experience affected the trajectory of my life, and eventually led me to Everest at the age of 32.

NFM: What inspired the formation of No Barriers?

EW: I was introduced to rock climbing in 1999 with a friend of mine named Mark Wellman, who was the first paraplegic to climb El Capitan. The other guy climbing that day was a guy named Hugh Herr, who is a double-amputee and designs his own prosthetic legs for rock climbing; he is an amazing rock climber. So, the three of us climbed this tower together and we were so blown away by the idea that each of us could attack our own personal barriers. We wondered if there was an application for other people, and if there was something universal here.

We started No Barriers in 2003 with physical disabilities as a focus of the organization, but then we realized that there is an expansive definition of the word “challenge” and everyone on earth has challenges. We realized that the heart of No Barriers isn’t about sports; it’s really about the journey and the universal pieces along that journey that enable us to move forward rather than get crushed or stopped in one spot.

NFM: How has No Barriers expanded over the years?

EW: A lot of people get knocked down and never get up again, or are stuck at a point in the journey. We want to help people attack the journey of life and its challenges, and emerge on the other side changed in some way for the better. And that does include people who are missing legs and eyes, or who are paraplegics, but it also includes kids who have been hurt or experienced trauma, people who have lost loved ones to violence or war, or those who struggle with obesity. So we’ve brought a lot of people into our community over the years because they connect with that No Barriers message in a very human way. Our tagline is predicated on the idea that what’s in us is stronger than what’s in our way. That there’s something in our core, and if we learn to use it right, it can help us respond to and transcend the barriers outside of us.

NFM: What is No Barriers Warriors and what inspired you to focus on veterans?

EW: In 2010, we were thinking about the 10-year anniversary of our Everest climb. Because so many of our lives had been affected by that mountain, we thought it would be cool to do something special to commemorate the anniversary.

Ultimately, we decided to climb a peak, and introduce another group of people to this experience that has such an ability to be so transformational. We decided that soldiers who had been hurt in Afghanistan or Iraq were so deserving of the mountains. As we climbed a 20,000-foot peak with the veterans, they were telling us that they’ve been in therapy for five or six years, and this monthlong experience had been more healing and more therapeutic for them than all of that. We thought, we’re on to something. We didn’t even know what it was at the time, but we knew there was something transformative there. 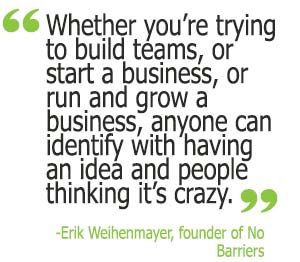 We started to understand that it’s not just climbing; it’s the journey we go on and some of these journeys can derail you. It’s a big journey if you go off to Iraq and you come home without legs or with a brain injury or with PTSD, but the question is how do you attack it and reclaim your life and live it with purpose again? So we brought that into No Barriers in 2010 with No Barriers Warriors.

NFM: How will No Barriers resonate with Expo West attendees?

EW: No Barriers is universal. Whether you’re trying to build teams, or start a business, or run and grow a business, anyone can identify with having an idea and people thinking it’s crazy. No Barriers is about starting with a vision and about the internal compass that guides you. It’s about reaching for something clear and pioneering your way forward, and flailing and bleeding along that journey. It’s about what we call at No Barriers alchemy—taking the obstacles that try to crush you and using them as energy to propel you forward. It’s about building a rope team—a team of people who will support your dreams and what you want to do. You’ll reach summits together and then take those summits and use them to elevate the world in some way. The No Barriers journey applies to everyone.

Don't go to Natural Products Expo West without these notes in your pocket
Jan 28, 2016

Why Expo West keynote Sam Kass is optimistic about the future of food
Jan 27, 2016