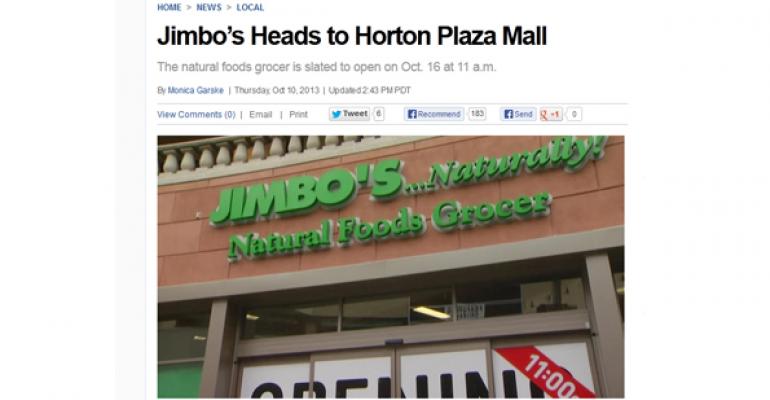 The downtown mall store is the largest of his independent chain. The articles below include a local TV station's segment previewing the opening and a Q and A (including a slide show tour of the store) with Someck from the San Diego Union Tribune.

October 15, 2013 · NBC 7 San Diego · The downtown location is Jimbo’s fifth store in San Diego. The others are located in Carmel Valley, Escondido, Carlsbad and 4S Ranch. Unlike others, the downtown store will offer more freshly-prepared, take-out food – a great option for those who live and work in downtown San Diego. Made-to-order options will include a burrito bar with all the trimmings and a wok station.
Open this article

October 15, 2013 · www.utsandiego.com ·“I thought oh no, here we go, because that’s always the issue with organic food, is that it often costs a little bit more than conventional food,” Someck said. But then the man told him, “I can tell you I’ve saved more than that on doctor’s bills and have never felt better in my life.” “That kind of spurred me on to continue doing what I was doing,” Someck said....
Open this article

October 15, 2013 · www.utsandiego.com · Jimbo’s will cut the ribbon on its fifth store Wednesday at Westfield Horton Plaza, thus becoming downtown’s first full-service, natural-foods supermarket.We talked with Someck about the future and how he continues to compete with big names like Whole Foods and Sprouts.
Open this article

3 tips for surviving in a competitive retail environment
May 22, 2012