HomeNewsLocally grown produce is looking up for retailers—literally
Recent
Latest
EXPO VIDEO: How did a young sparkling water brand get licensing deals with Marvel and Disney?
May 16, 2022
Beyond Meat's product launches lower Q1 profits
May 16, 2022
Sponsored Content
Exploring the CBD gummy revolution – article
Moonshot Snacks at the forefront of eco-friendly food innovation
May 13, 2022
Trending
Debra Stark’s light shines bright on natural products industry
May 10, 2022
Unboxed: 7 plant-forward ice creams to stock this summer
May 10, 2022
Hemp CBD industry struggles so far in 2022
May 10, 2022
Monitor: Consumer research on collagen shows how much education is needed
May 12, 2022
Natural Foods Merchandiser
brought to you by

Locally grown produce is looking up for retailers—literally 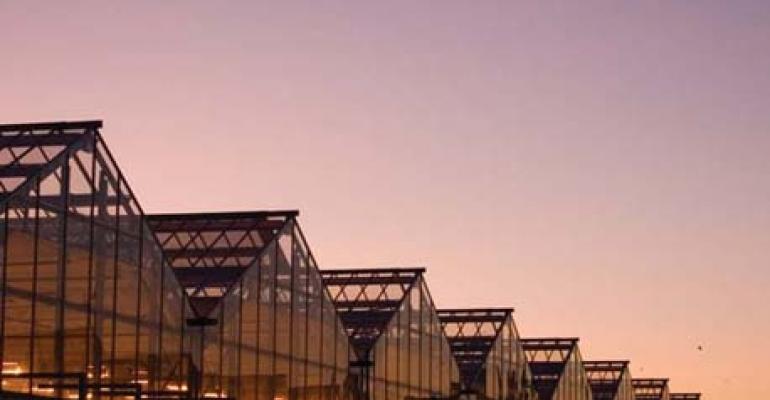 Consumers increasingly want locally grown produce; but, the fact is, the average fruit and vegetable travels more than 1,000 miles before it reaches a grocery store. But what if you could have access to locally grown produce year round and cut the cost of shipping these products to zero? New York–based BrightFarms is making this very scenario a reality by building hydroponic greenhouses on retail rooftops.

BrightFarms originated as a non-profit consultancy that helped build greenhouses on the roofs of schools and affordable housing developments. In late 2010, BrightFarms reorganized with the ambition of turning large-scale greenhouse farming into a profitable business. By cutting out the wholesale middlemen, stripping away shipping costs and maintaining low energy bills with highly efficient greenhouses, BrightFarms thinks it can compete toe-to-toe with big industrial farm prices. Benjamin Linsley, BrightFarms’ vice president of business development, says that his company’s greenhouse offerings will be “fresher and tastier” than produce shipped long distances and will help protect supermarkets from extreme fluctuations in global markets. “Every time oil prices go up or down, so do food prices,” he notes.

But the bright idea that makes BrightFarms so innovative isn’t the use of sophisticated hydroponic greenhouses to grow vegetables—such facilities are widespread in countries like the Netherlands. Rather, BrightFarms’ big innovation is its business model. Patterned after financial arrangements often used in the renewable energy sector, BrightFarms will pay the money needed to install and operate a greenhouse on the site of any grocer that signs a contract to buy vegetables from BrightFarms for 10 years. BrightFarms then uses that contract to secure financing to build the greenhouse, which costs about $2 million. The contract price for BrightFarms’ produce is based on a fixed rate that is tied to the consumer price index. “We don’t want supermarkets to pay more than they are paying now,” Linsley says.

As the program expands, BrightFarms plans to contract out the actual running of each greenhouse to an independent local farmer, who will be trained to monitor temperature and nutrients being delivered to the plants. This being the high-tech future of farming and all, a master grower in New York will then watch all the farms via closed circuit TV and collect data on how to nurture the best yields. Linsley says that BrightFarms’ model could potentially be expanded to schools, prisons, corporate campuses and other institutions that buy large volumes of lettuce, tomatoes and other produce. But for now, BrightFarms is staying focused on building partnerships with supermarkets. “It’s a market sector that is sensible to focus on,” Linsley says. “We’re very pragmatic.”

In October, McCaffrey’s Markets announced that it had inked a deal with BrightFarms to build and operate an on-site greenhouse at one of their three stores, located in New Jersey and Pennsylvania. “Not only will the greenhouse allow us to continue providing to our customers the freshest and highest quality produce,” said McCaffery’s owner and CEO, Jim McCaffery,” but it also fits right into our company philosophy to make as small an impact on the environment as possible.”

As part of the agreement, McCaffery’s will purchase items grown on site, including lettuces, tomatoes and herbs. Other produce will be added over time. According to BrightFarms, McCaffrey’s “ultra-local” produce will be grown for taste—not shelf life—and will arrive on McCaffrey’s shelves within 24 hours of being harvested.

Retailer Roundtable: How do you work with local farmers?
Aug 12, 2010

Can local, organic food be affordable to all? Hardwick, Vermont, works to find out.
Jul 14, 2011