HomeNews365 by Whole Foods opens today
Recent
Latest
4 tips to get ahead of chemical concerns in packaging
May 20, 2022
7 CBD favorites in the increasingly popular gummies format
May 20, 2022
Mission MightyMe helps parents introduce allergens to babies
May 20, 2022
UNFI's Eric Dorne to step down as chief operating officer
May 20, 2022
Trending
Whole Foods' honors 30 companies with 10th annual Supplier Awards
May 18, 2022
Getting ready for 2023: Trends for brands to consider
May 17, 2022
Sponsored Content
The rise of sustainable business – eGuide
Sponsored Content
Natural beauty market trends
Jun 16, 2021 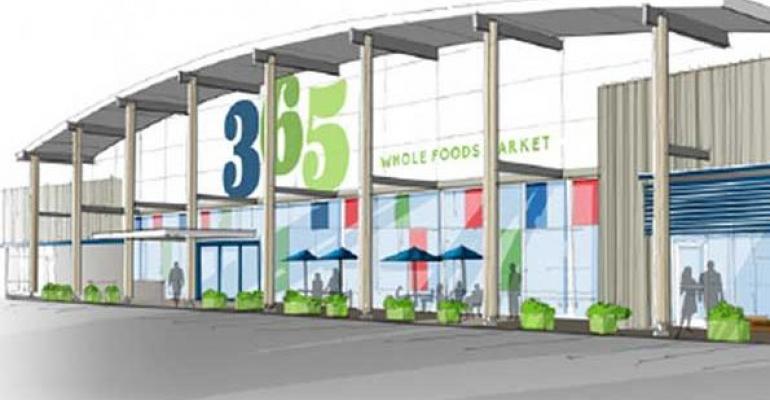 365 by Whole Foods Market is scheduled to make its debut today in the Silver Lake section of Los Angeles.

The Austin, Texas-based company has announced plans for two more 365 stores this year — in Lake Oswego, Ore., in mid-July and Bellevue, Wash., in the fall — plus at least 10 more next year.

“We want [365] to appeal to a wider audience," said Jeff Turnas, the executive in charge of the 365 format. "This model allows us to compete with everybody in the market.”

Whole Foods is describing the 365 concept as “quality meets value … in an environment that’s fun and convenient for shoppers.”

The Silver Lake store, in a former Ralphs location, will cover approximately 30,000 square feet with extensive perishables, albeit a more curated assortment than at legacy Whole Foods stores, with more pre-packaged merchandise and fewer service departments to reduce store labor.

The stores will be geared to Millennial shoppers, the company said.

Whole Foods will lease space across the front of the store interior to “friends of 365,” which in Silver Lake will include a vegan fast-casual dining area operated by Samantha Wasser, founder of By Chloe, a New York vegan restaurant; a craft brew bar with drinks from Allegro Coffee Co.; and teaBOT, a self-service kiosk that allows customers to mix several teas and other ingredients.