HomeNewsCould Donald Trump's tweet be good for the non-GMO movement?
Recent
Latest
4 tips to get ahead of chemical concerns in packaging
May 20, 2022
7 CBD favorites in the increasingly popular gummies format
May 20, 2022
Mission MightyMe helps parents introduce allergens to babies
May 20, 2022
UNFI's Eric Dorne to step down as chief operating officer
May 20, 2022
Trending
Whole Foods' honors 30 companies with 10th annual Supplier Awards
May 18, 2022
Sponsored Content
The rise of sustainable business – eGuide
Sponsored Content
Getting ready for 2023: Trends for brands to consider
May 17, 2022
Sponsored Content
Debra Stark’s light shines bright on natural products industry
May 10, 2022

Could Donald Trump's tweet be good for the non-GMO movement? 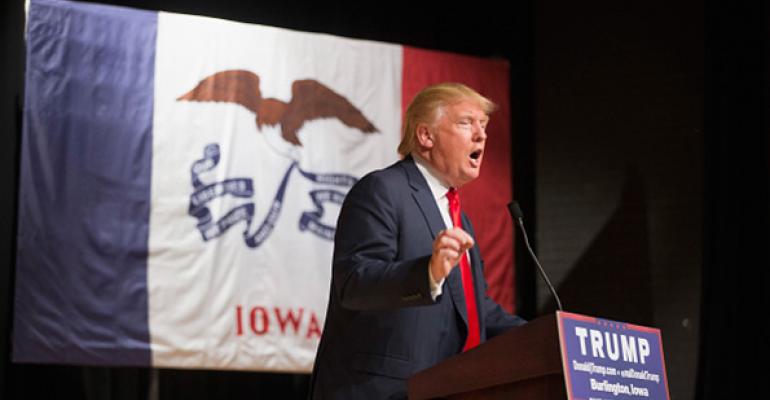 The presidential candidate&#39;s (since deleted) tweet may not have really told us anything about his stance on GMOs, but it shows that Big Ag and genetically modified foods have become mainstream.

Monsanto is bad. I guess one could say that was the gist of a hot-button re-tweet that put presidential candidate Donald Trump under fire. Yet the Monsanto-bashing implications haven’t exactly been the sticking point with mainstream media.

The tweet from Trump read: “Too much #Monsanto in the #corn creates issues in the brain?” in regards to Ben Carson leading the polls in Iowa.

Although Trump quickly deleted it, media and Trump opponents erupted. Insulting the intelligence of an entire state's population? Who would do such a thing? Whether it was a young intern or Trump himself, it doesn’t really matter. It landed in the public sphere and will linger here until our short attention spans take us elsewhere. Ok, maybe it does have a short shelf life, but I think there are some interesting implications here that aren’t getting much media buzz.

1) The tweet isn’t just derogatory toward the people of Iowa; it’s insulting the agricultural giant, Monsanto, a point that has been more secondary in headlines. There’s not much information out there about Trump’s current position on Big Ag and Big Food. We can infer where he stands, but since it’s not an issue he has talked about frequently, this tweet alone could loosely (even if it’s very loosely) align him with non-GMO advocates. Or at least until he deleted it, blamed a young intern and said he didn’t “like” it...

A side note: Digging into his stock portfolio a bit (I wish that was as cool as I just made it sound, but it’s public info; thanks Business Insider), I found that the main food company Trump owns stock in is Whole Foods. It’s likely just smart business, not an indication of stance on Americans’ diets and our food system, but hey—add to that his Oreo ban (though totally unrelated to the fact that the ingredients are garbage and actually due to outsourcing production), and...

At the very least, he sees the opportunity in the space; then again, his recently disclosed public McDonald’s habit may beg to differ.

2) Let’s say there isn’t any back story or underlying implications of this tweet. Here’s the really important point: The conversation about Big Ag and genetically modified foods is starting to become mainstream. Not to say that this was factual or insightful (there’s no conclusive research showing that GMOs have negative health effects), but it will get people talking—even if only a few of those conversations are about our food system.