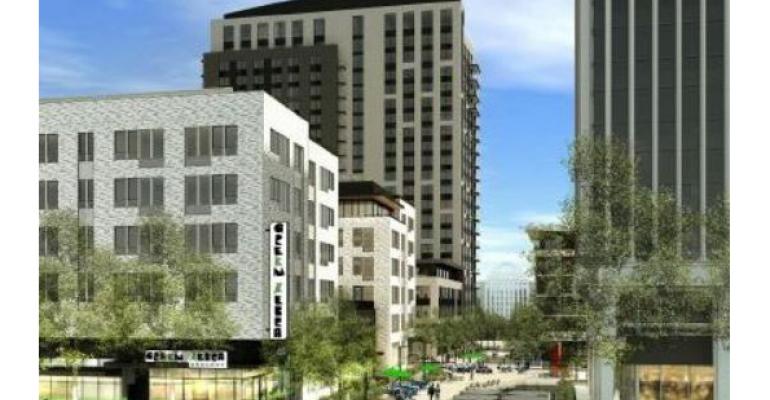 Green Zebra Grocery has announced the details for their second store in Portland’s Lloyd District. This announcement comes on the heels of a successful $2.5M capital raise by the company to fuel expansion.

Green Zebra will be the anchor tenant for Portland’s “newest neighborhood,” known as Hassalo on Eighth. “We are thrilled to welcome Green Zebra to Hassalo on Eighth,” said John W. Chamberlain, President and CEO of American Assets Trust Inc. “Green Zebra is the perfect addition for our new development, and will quickly become a favorite shopping destination for the local residents and office workers in the Lloyd District.”

Commenting on the second store, founder and CEO Lisa Sedlar remarked “We love the Lloyd neighborhood and we’re super enthusiastic about the opportunity to bring healthy, local, organic foods to eaters in the neighborhood.

In addition to serving the residents of Hassalo on Eighth and the Lloyd District, our small format store will be convenient for our neighbors in Sullivan’s Gulch, Irvington, and the Central Eastside, as well as the thousands of folks who work in the neighborhood.”

“It feels great to be part of the Lloyd District’s transformation to a more vibrant, active, healthy, econeighborhood. We estimate that half of our eaters will get to our store by walking, biking or public transportation”

The new Green Zebra will offer local produce, sustainable meat and seafood, a full deli and salad bar, beer and wine, everyday grocery items, a coffee and tea bar, and seating for lunch and dinner.

Green Zebra’s first store, in Portland’s Kenton neighborhood, has been open for just under two years and has already had a big impact on the local food economy. The store employs nearly 50 people, with a minimum wage of $11.10/hr and offers health insurance to both full and part-time staff members and their dependents. They purchase sustainably raised, local and organic products from over 60 Pacific Northwest growers, ranchers, fishers and grocery vendors.

The company, whose stated mission is to “increase access to healthy food,” also has plans to open more stores in Portland in the next two years including a location in the Richmond neighborhood.

“There is still definitely going to be a Green Zebra at SE 50th and Division” Sedlar said. “There are some moving pieces on that project and we hope to have a more substantive update very soon. We’ve heard from our neighbors in SE Portland that they are eager for us to be there, and we’re very grateful for their support and patience.”

The new Green Zebra Grocery in the Lloyd will employ 40 50 people and the company said they would be announcing open positions and a job fair date in the coming months.