HomeNewsJust Eat It tells a compelling story about our food waste problem
Recent
Latest
4 tips to get ahead of chemical concerns in packaging
May 20, 2022
7 CBD favorites in the increasingly popular gummies format
May 20, 2022
Mission MightyMe helps parents introduce allergens to babies
May 20, 2022
UNFI's Eric Dorne to step down as chief operating officer
May 20, 2022
Trending
Whole Foods' honors 30 companies with 10th annual Supplier Awards
May 18, 2022
Getting ready for 2023: Trends for brands to consider
May 17, 2022
Sponsored Content
The rise of sustainable business – eGuide
Sponsored Content
Natural beauty market trends
Jun 16, 2021 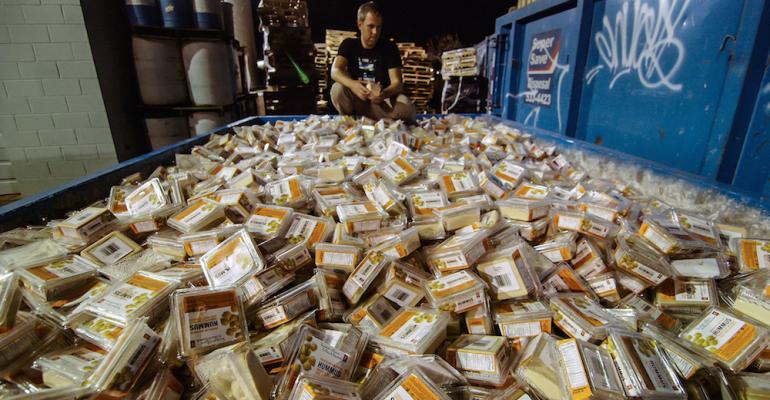 I love documentaries, and I especially love documentaries that challenge your every day perceptions of seemingly innocuous things. Like what’s in your fridge right now. Like the last time you threw out leftovers you swore you were going to eat, or veggies that went bad before you could eat them. And that’s why Just Eat It was such a moving story that everyone should watch. The summary states: “In a nation where one in 10 people is food insecure, the images they capture of squandered groceries are both shocking and strangely compelling.” Compelling enough for you to go directly to your pantry and fridge and start re-evaluating everything.

Just Eat It is a story about a couple (Jen and Grant) concerned about food waste. So concerned that they made a documentary about their life and their six-month journey of only living off of otherwise-wasted food (or “rescued” food). But this wasn’t just about dumpster diving -- what you may think of when you think about food waste. They were also living off of discarded food, like the leftovers found in their family members' fridges. This sort of innocuous food that you don’t think about when you think about waste, is also waste. Think about how often you go grocery shopping only to find out that you had plenty of the item you bought already in your fridge? When was the last time you bought in bulk, only to end up throwing much of it away? When was the last time you ate all of your vegetables or fruit before they all went bad?

Waste in our own home

Their brother says something in the beginning of the film that really resonated with me: "Shopping when you're busy, you forget what you have. The reality is you're shopping and busy, and you just keep piling up this collection of stuff in the fridge. Do I really want leftovers? We have enough money to buy a whole new meal. That's a problem with a wealthy society.” I can really relate to this type of waste. Throwing away perfectly good leftovers because we’re eating what we crave, but not what we have on hand. According to a New York food waste study, most waste came from households, not restaurants or grocery stores. We’re wasting 20 percent of what we buy from supermarkets.

The last acceptable way to destroy the world

The film calls food waste one of the last environmental ills that a person can get away with without being judged. Not only is food waste widespread, but also condoned. During World War II, families had to sacrifice for the good of the country. But since then, food has become such an abundance, that people are considered poor hosts if they don’t have enough food (and more) to feed any guests they may have. Larger portions are seeping into our household, restaurants and packaged goods.

Throughout the film, shots of sprawling dumpsters packed full of edible food are disturbing. Grant finds dumpsters full of non-expired hummus as far as the eye can see. Boxes upon boxes of organic chocolate culled due to a packaging error. Unused food waste from photo shoots. Boxes of culled produce that was just a little misshapen or bruised. The couple feels guilty for being excited to find food like this, because it’s a picture perfect image of the food waste problem in America. They thought they’d be starving, when in reality, unfortunately, there’s plenty of (wasted) food to go around.

They state that rich counties have about 150 to 200 percent of the food they actually need. The problem is in abundance -- in food, and waste -- in the energy it takes to make the food, store the food, etc. "We are trashing our land to create food that no one eats."

The couple takes a trip to a farmers market, where we see stuff that won't sell because it’s weird or odd shaped or funky colors (but perfectly good). Consumers assume that what looks better tastes better. In reality, not every apple grows perfectly round or red in a tree. If we expect that going into a store, we’re part of the problem -- driving waste through the system. The owner of Ice Cap Organics says that if there's one bushel or stalk left on the shelf, someone won't buy it because they assume there might be something wrong with it.

The movie shows that supermarkets really dictate the parameters of what something is supposed to look like. An author featured in the film visited a banana plantation, and because of the ways some of the bananas looked, one whole truckload was wasted -- and that’s fairly normal. Jen visits a store to find items that were to be culled and attempts to buy them. By policy, the store employees say they aren't allowed to sell culled items. Unfortunately, food banks don’t know how to manage the culled produce coming in, and much of it is simply thrown away.

Don’t fall for best by dates

While I often struggle with this myself, a chunk of the movie helps viewers understand that “best by” or “enjoy by" dates are not the dates to toss items in the garbage. Sixty percent of consumers waste food prematurely because they don't understand these grocery store labels. The “sell by” date actually indicates that if a consumer gets it home by that date, the product will still have shelf life remaining. And did you know that the “best by” and “enjoy by” dates are indicators of quality and not of safety? There is currently no regulation about selling a product by "use by" date -- it's just what grocery stores use for peak performance. Supermarkets use "fear of being sued" to hide their embarrassment from culling a few days before these “enjoy by” dates. Makes you rethink that package you just threw out, doesn’t it? Makes me want to go directly to my grocery store and ask them about their food waste policy and what they’re doing on a corporate level to reduce food waste.

So what can we do about it?

At the end of the movie, they revel that the couple rescued more than $20,000 worth of food and only spend $200 to feed themselves for six months. I’m the primary grocery shopper, and my jaw dropped to the floor that they managed to feed themselves, without starving, for six months on what I spend for one week at Whole Foods. There will be some serious re-evaluations of my food waste when I get home.