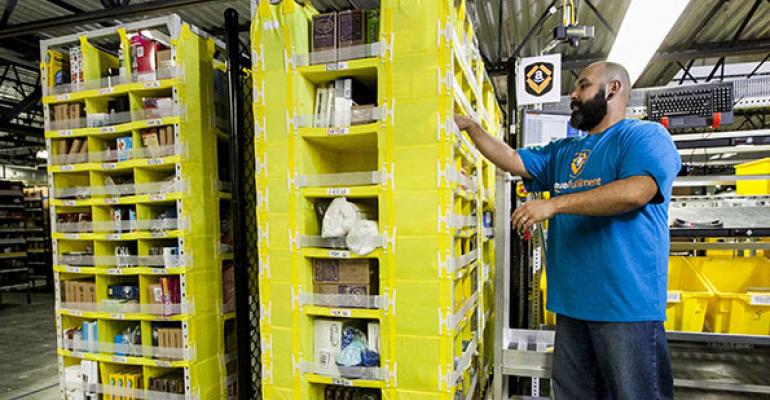 How Amazon Prime is changing the retail landscape, and how independent stores can earn back business.

According to recent findings from The NPD Group and CivicService, roughly a quarter of American households now have access to an Amazon Prime account—just a decade after its launch. What does this mean for independent retailers?

The breakdown: Consumer surveys revealed that about 18 percent of Americans pay for a Prime membership for their household; roughly 7 percent live in a household with Amazon Prime, but don’t pay for it; and about 4 percent live in a household with Prime and don’t use it. But perhaps most interesting is that a whopping 30 percent of respondents said they had not heard of Amazon Prime, indicating to researchers that the growth potential for the service is still quite high.

The allure: Think Prime’s $99/year fee is off-putting to penny pinching shoppers? Think again. According to Stacy Mitchell, co-director of the Institute for Local Self-Reliance, the fee actually acts as more of an incentive than a barrier. “By getting people to sign up for Prime, Amazon creates a relationship with the customer, who is then incentivized to make back that fee by buying more and more,” she said, especially when it comes to pantry items like food, supplements and basic household goods—the bread and butter of many natural product stores. “Customers can even opt to receive repeat deliveries of that pasta sauce they like or the paper towels they use,” she explained. “They don’t even have to think about it and it shows up at their door.”

The implications: “Throughout human history, commerce has been connected to community and, for the first time in history, online models are severing that relationship,” Mitchell said. “The potential implications from the standpoint of the local economy are enormous.” Among these implications are the jobs and tax revenue that brick and mortar stores represent, as we 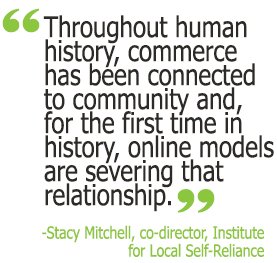 ll as the vitality that independent stores contribute to their local communities.

The challenge: According to Mitchell, many shoppers—even those who are supportive of buy local movements—haven’t yet taken a critical look at the effects of their online shopping habits. “I live in a city where there is a very strong buy local organization. You can’t go outside without noticing it; it’s very visible,” said Mitchell. “Yet, what I’ve observed is that people have that frame of reference when they think of going to Home Depot instead of the local hardware store. For some reason, online shopping occupies a different part of their brain and I’m not sure they’ve drawn that connection with Amazon yet.”

The solution: Making that local connection is key, said Mitchell, suggesting that retailers set up a time to have coffee with their city’s mayor, talk to a local reporter, write a letter to the editor or hold a community forum. “Just remember to keep it positive,” she advised. Retailers can also join their local downtown organization or business alliance, which often boast the numbers in addition to educational resources for both retailers and customers looking to spread the word about the local implications of online shopping. The Institute for Local Self-Reliance is a great place to start—it has tons of resources, like this infographic for stores.