HomeNewsProtein positioning helps meat snacks maintain momentum
Recent
Latest
4 tips to get ahead of chemical concerns in packaging
May 20, 2022
7 CBD favorites in the increasingly popular gummies format
May 20, 2022
Mission MightyMe helps parents introduce allergens to babies
May 20, 2022
UNFI's Eric Dorne to step down as chief operating officer
May 20, 2022
Trending
Whole Foods' honors 30 companies with 10th annual Supplier Awards
May 18, 2022
Sponsored Content
The rise of sustainable business – eGuide
Sponsored Content
Getting ready for 2023: Trends for brands to consider
May 17, 2022
Sponsored Content
Unboxed: 7 plant-forward ice creams to stock this summer
May 10, 2022
Natural Foods Merchandiser
brought to you by 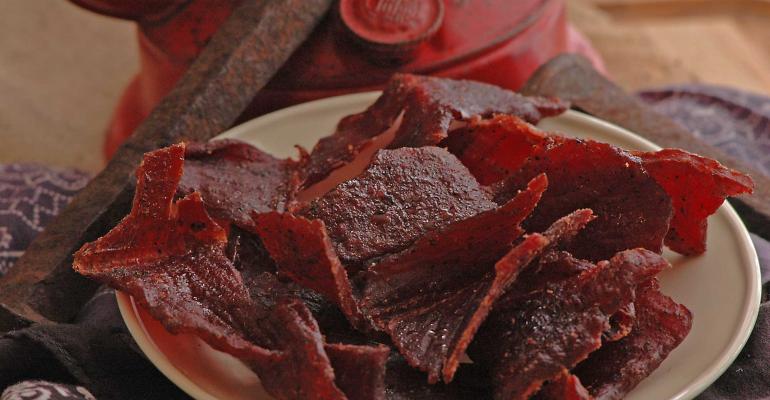 Globally, nearly 15 percent of meat snacks make protein claims, but in the U.S. that rises to more than 50 percent.

Recent rapidly growing interest in protein content has been of particular benefit to the meat snacks market, where many products are naturally high in protein and have made increasing use of high-in-protein or source-of-protein claims. According to Innova Market Insights data, nearly 15 percent of global meat snacks — and more than 50 percent in the U.S. — launched in the 52 weeks prior to the end of April 2015 made protein claims.

“Even prior to the emergence of this enhanced interest in protein, the meat snacks market was showing good growth globally, reflecting the rising demand for more substantial snacks suitable for eating on the go,” according to Lu Ann Williams, director of innovation at Innova Market Insights.

With a few exceptions, including the U.S. and South Africa, the market remains relatively undeveloped, however. Launch numbers remain small in terms of snacks introductions as a whole, with just 5.5 percent of the global total in the 52 weeks to the end of March 2015. Total numbers have risen consistently in recent years, however, reflecting ongoing segmentation in more established markets, such as the U.S., as well as greater penetration in non-traditional markets, particularly some of those in Europe.

Asia dominated activity with more than 60 percent of introductions, mainly as a result of the large number of traditional-style meat snacks being launched in China. North America, primarily the U.S., took second place ahead of Europe, where despite the large number of countries and cuisines involved, the relatively underdeveloped status of the market meant that activity levels were more limited.

Meat snacks are the fourth largest savory snacks category in the US after potato chips, tortilla chips and nuts/trail mixes. The market is dominated by jerky-style products and, despite being relatively mature, has shown good growth in recent years. Manufacturers have updated their product ranges to focus on a healthier image, more convenient packaging formats and a greater choice of increasingly complex flavor options, particularly hot and spicy variants, often with an ethnic twist. There has also been ongoing interest in extending the use of different types of meat beyond the traditional beef and turkey, with launches including chicken and bacon products.

With the underdeveloped status of the meat snacks market outside the U.S., there are clearly further opportunities for growth, particularly if the image of the products can be delivered as tasty, healthy, substantial and convenient snacks for all occasions, boosted by ongoing product and promotional initiatives. “Recent acquisition activity, both in the US and in Europe shows that the industry definitely thinks it is a market with still more potential to come,” Williams concluded.