5 sweeteners that matter in natural [Infographic] 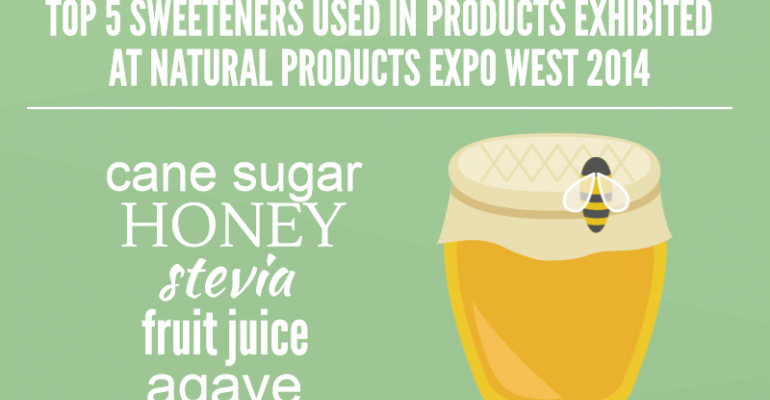 Despite the low-calorie appeal of artificial sugar substitutes, most natural product companies are turning to cane sugar, honey and stevia to sweeten their products.

PepsiCo churned up the old aspartame debate last week by announcing that it would remove the controversial artificial sweetener from its Diet Pepsi products in the U.S. because of consumer concerns. Even though many researchers and the FDA have deemed aspartame safe, reports linking the sweetener to cancer and other health concerns have spooked consumers for years.

Now, the soda giant will use a combination of sucralose and acesulfame potassium to sweeten its diet drinks. While these artificial sweeteners may have slightly better reputations, there are signs that consumer preference (perhaps led by the growth of natural and organic food products) may be tipping more toward products made with natural sugars, but just less of them. For example, last year, Pepsi and Coke both released mid-calorie sodas sweetened with a mix of sugar and stevia.

In the natural products industry, brands seem to have all but dismissed aspartame and most other artificial sweeteners, according to data from New Hope Natural Media's NEXT Trend database, which tracks information on more than 27,000 products exhibited at Natural Products Expos East and West over the last two years. Aspartame, for one, appeared in less than 0.01 percent of products at Expo West 2014.

Here’s a look at the sweeteners that matter most in the natural channel, and those that are gaining and losing favor among natural product makers.