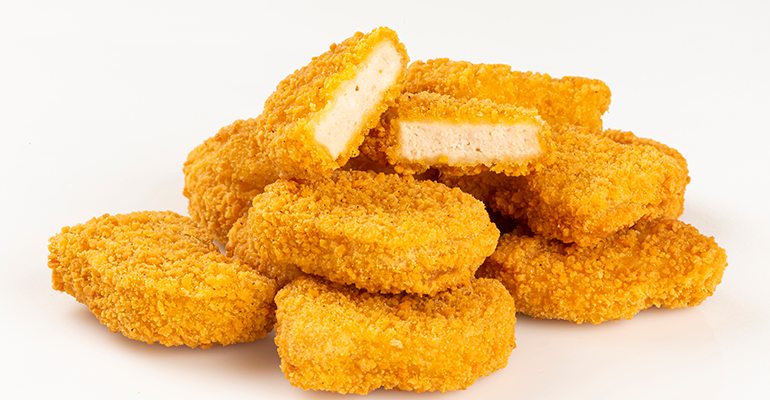 Several meat shortages, price hikes and devastating environmental reports later, more consumers than ever are on board with plant-based meat. The plant-based chicken nugget market in particular now has some fierce competition in the form of Beyond Meat's fava bean-based chicken tenders and Impossible Foods' soy-based chicken nuggets. The former product will go on sale in U.S. grocery stores in October while the latter launched last month and is currently sold in Walmart, Kroger, Albertsons and more. However, their success is not a given as there are more than 50 brands of plant-based nuggets, tenders and cutlets already on sale in U.S. stores, according to The Washington Post.

California's Prop 12, which will ban the sale of fresh pork from producers in any state who don’t comply with specified animal welfare regulations, is under attack by the pork industry under the guise of a group called the Food Equity Alliance. The group's spokesperson told Civil Eats that it "is simply asking for a delay in the law’s implementation because the California Department of Agriculture (CDFA) was late in publishing regulations and the pork industry will not be able to comply in time, resulting in supply issues." Supporters of the law, however, say producers, retailers and other companies involved in this supply chain have known the core requirements for nearly three years and are now using the issue of “equity” in a last-ditch effort to delay making the changes.

By owning the supply chain, is it possible for grocery delivery platforms to keep their prices on par with brick-and-mortar supermarkets? Amsterdam-based platform Picnic is testing this theory out. Orders made via Picnic’s service are delivered straight from its distribution hubs to customers’ front doors at an appointed time by its fleet of small electric vans. This is a similar business model to Philadelphia-based Gopuff, which boasts its own network of microfulfillment centers stocked with inventory. “Rarely will a company 100% own their supply chain, but the decision about what parts to own is important,” one expert explained to The Food Institute. “With more ownership comes more control, which is important for the growing trend of supply chain transparency for goods and food, and potentially lower costs, if you can create an efficient enough supply chain.”

There are many metrics that go into reducing food waste when it comes to indoor crop production, but it starts with the hypercontrolled environments that facilitate less waste from the beginning simply by engendering fewer defective plants. Another important concept is cleanliness with regard to shelf life; the plants are grown in sealed rooms with filtered air and purified water and aren't touched by human hands until harvest, which leads to less fungi and bacteria on plants that contribute to decay. Chemical-free, too. But are they as nutritious because they aren't getting minerals from the soil? This Q&A out of The Spoon indicates that being able to easily increase the nutritional content of crops grown indoors is on the horizon, but they're not quite there yet.

McDonald's promised us a veggie burger, so where is it?

When it comes to McDonald's, not many of the company's sustainability initiatives matter more than offering a plant-based substitute for its flagship burgers. And yet, despite promises upon promises, McDonald's has yet to deliver on one. The reason this is so important is because sometimes McDonald's is the only option in consumers' areas, or it's the only affordable option. And a more sustainable model for beef production, in this case, won't cut it iin terms of reversing McDonald's decades-long negative impact onour dying planet. I'll leave you with this quote from Eater: "preaching personal responsibility over corporate responsibility is how businesses like McDonald’s have gotten away with poisoning the Earth for so long."