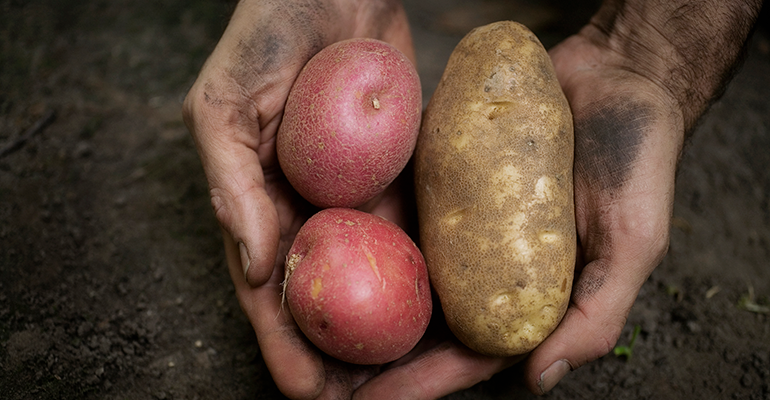 Could a rapid test for antibiotics bring transparency to the food supply chain?

Consumers buying meat marketed as "antibiotic-free" or "no antibiotics ever" more often than not aren't getting what they expect. Antibiotics that speed growth in animals are routinely and discreetly used to prevent them from getting sick in stressful and crowded conditions across farming operations; in fact, the U.S. cattle industry uses medically important antibiotics four to six times more intensively than four of the top livestock-producing countries in Europe. But Civil Eats writes that a new, simple rapid test could bring immediate transparency and finally change this industry for the better. Future implications of the technology mean consumers might have the ability to test a product to ensure that it's genuinely non-GMO, or for a number of other tangible product attributes.

The ancient potato of the future

A new potato, specifically the Four Corners species, could be the go-to potato crop for farmers in the future because of its 8-year-long shelf life and resistance to climate change-related heat and drought. Over years of research, scientists have also found that it is far less likely to be affected by potato scourges such as late blight, the culprit of the famous Irish Potato Famine. However, The Counter notes that the Four Corners potato has been an integral part of Indigenous American diets for millennia, and breeding research or modifications to the crop should feature the formal participation of tribes associated with the potato.

Dollar Tree is one of the last true dollar stores in the U.S., or, rather, it WAS one of the last true dollar stores in the U.S. prior to a recent price hike that raised prices from $1 to $1.25 across the majority of products across the chain. The company stated that its decision to raise prices to $1.25 permanently was "not a reaction to short-term or transitory market conditions," per CNN Business, but is an effort to bring back "consumer favorites" that were no longer available at the $1 price point. In September, Dollar Tree said it planned to begin selling items at $1.25 and $1.50 at some stores for the first time, and it also said it would add $3 and $5 items to more stores, expanding on a prior strategy to offer these prices at several locations.

The Food Institute explains how the growing importance of so-called "smart farming," basically using Internet of Things sensors and artificial intelligence to manage farming operations with better precision, is leading to significant acquisitions in the space. For example, Fielden, the world’s largest smart farm operations management company, recently acquired agricultural autonomous driving company Midnight Robotics. “Many people think that autonomous tractors are some magic solution, but at the end of the day, they’re just machinery–your autonomous farm can only be as good as your farm management data, and that’s why this acquisition is driving the autonomous farming revolution forward,” said the CEO and co-founder of Fieldin.

Why the future of animal welfare lies beyond the West

The vast majority of animals are farmed in countries outside of the U.S. and EU, so why did just one-fifth of the $200 million allocated for the animal advocacy movement end up reaching those overseas activists? This discrepancy comes amid several troubling trends, including skyrocketing meat consumption in China (the country now eats a whopping one-third of the world's meat) and intensive farming practice growth in Latin America, Asia and Africa. Vox notes that Western activists can't rely on the same tactics to sway locals in non-Western countries, which oftentimes view meat consumption as a marker of status rather than an ethical issue; cultural norms also have to be respected and navigated.