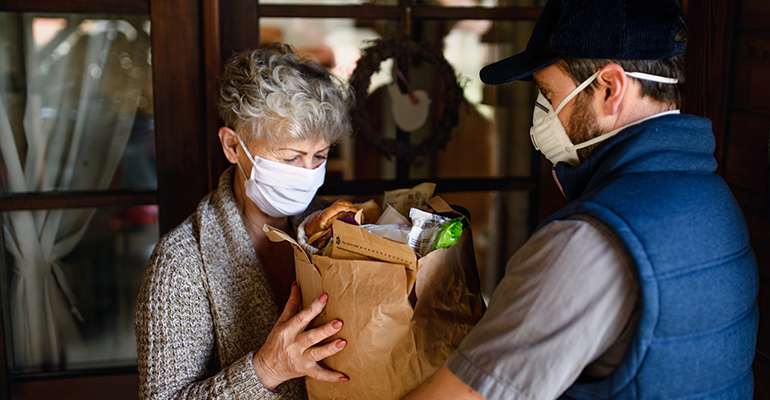 15-minute grocery delivery has arrived. Do we need it?

This breakdown of 15-minute grocery delivery services (which have exploded over the past year thanks to the pandemic) by Eater finds that most of their prices are comparable to shopping at a real-life grocery store—sometimes even less expensive—and that the 15-minute window is far more convenient than pre-booked delivery windows required by the likes of Instacart and Whole Foods. But how do they do it? These companies specialize in 2,000- to 3,000-item microfulfilment centers throughout cities as opposed to centralized warehouses; then, they employ workers to scour the shelves, pack the goods and deliver packages within a one- to two-mile radius.

The pandemic disrupted Americans’ access to food. Not everybody suffered equally

Experts predicted early on that COVID-19 would drive many families into hunger as jobs were lost and supply chains were disrupted. What they largely failed to note is that people of color would be disproportionately affected in terms of food access, with fewer white households having fought food insecurity in 2020 than in 2019. The Counter writes that this can partially be attributed to Black households entering the pandemic with a lower median income and higher poverty rates than other groups. Importantly, if emergency protections supporting these families are allowed to expire at the end of the year, the crisis will worsen.

California finally sees rainfall, but will it help end the drought?

How much will California's recent, record-breaking rainfall actually impact its drought-stricken farmland? For starters, the rain effectively extinguished what remained of one active fire and raised water levels in the state's Oroville reservoir by 20 feet, per Modern Farmer. However, experts say the beneficial impact will be minimal, as wildfire season usually ends around October anyways, and that 200% of typical precipitation would be needed over the next three months in order to actively combat the drought terrorizing farmers across the state.

While the frozen food aisle showcased a 3% increase in dollar sales for the 52 weeks ending Oct. 17, drops in purchases of frozen produce and frozen beverages dragged the category down. Convenience-focused frozen meals posted a 4.5% increase in dollar sales to $23 billion; specifically, the frozen breakfast meal category is seeing growth: “While normally time is the big pressure point for the breakfast meal occasion, shoppers had a little more time to warm up some waffles, pancakes or breakfast sandwiches rather than hurrying out the door with a breakfast bar in hand,” said Anne-Marie Roerink, Principal at 210 Analytics LLC, said to The Food Institute.

More than 130 countries and a bevy of private companies are pledging to reach net-zero emissions goals. But there are important differences in how countries and companies actually plan on limiting their contributions to climate change that are obscured by this nebulous term. In principle, the idea of net-zero offers countries and companies flexibility in meeting climate goals. But in practice, critics say that net-zero pledges delay meaningful reductions in greenhouse gases and provide cover to those unwilling to take immediate steps to limit emissions. Vox reports.