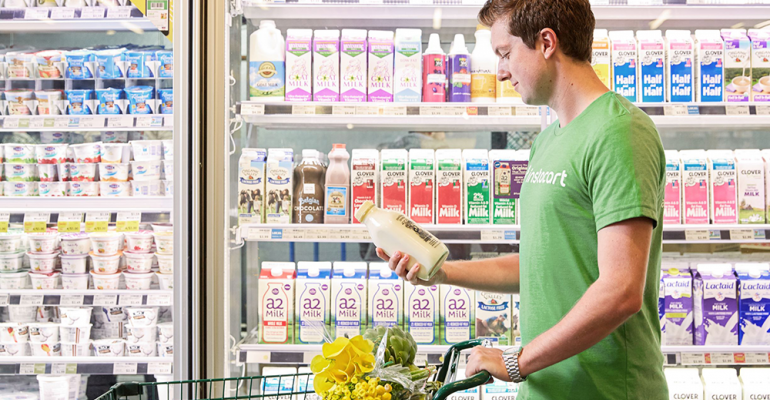 A new nationwide grocery delivery service could bring fresh food to consumers' doorsteps in as little as 30 minutes; Kroger Delivery Now is available 24/7 for Instacart Express members placing orders of more than $10. The service has the potential top reach 50 million households, according to the companies. Food and beverage online sales were more than $15 billion in 2020 and are expected to jump to more than $20 billion by 2023, according to Fast Company.

With pea protein on the rise, producers aim for innovation in fields and factories

The pea protein market is projected to more than double in size between now and 2028. Most of that growth will likely come from the nutritional supplements industry, but rising consumer interest in alternative meats will also create new opportunities for pea protein. Now, food tech companies are working to optimize the ingredient at every stage of production—from the peas grown in the field to the technology for extracting the protein. This means the harvested peas could soon boast higher quality, higher functionality and improved sensory characteristics associated with plant-based proteins. The Spoon reports.

Can aquaculture help women secure a new foothold in the seafood industry?

Aquaculture—the farming of fish and other aquatic animals and plants—is the fastest-growing food sector in the world. The industry is growing stateside, producing $1.5 billion worth of seafood in 2018. The type and scale of aquaculture varies immensely (from boutique kelp to industrial salmon), but small-scale aquaculture requires little equipment, has few startup costs, and is manageable for a single person. This is why the movement represents a potential growth sector for women in the U.S. Learn more at Civil Eats.

Farming generates $19 billion annually in Illinois, according to the state Department of Agriculture, and the state is among the top producers of commodities such as corn, soybean and pork. However, farmers say they struggle to find local workers. As the farming industry faces a severe labor shortage, producers rely overwhelmingly on foreign-born workers to maintain crops and tend livestock. And the labor pool for those who want to work on a farm is small and isn’t expected to get any bigger: Employment of agricultural workers is projected to only grow 1% from 2019 to 2029, notes this article from The Counter.

Immi takes in $3.8M to cook up plant-based ramen

Plant-based ramen company Immi announced Tuesday that it raised $3.8 million in seed funding. The global instant noodle space is projected to be a $32 billion industry by 2027, with $7.7 billion of value in the U.S. However, the ramen most people buy in the grocery store includes noodles made of refined carbohydrates that get cooked in oil, while the soup packets are high in sodium and preservatives. Immi, on the other hand, is plant-based, low carb and low sodium, high fiber and has 22 grams of protein on average. Get the skinny at Tech Crunch.