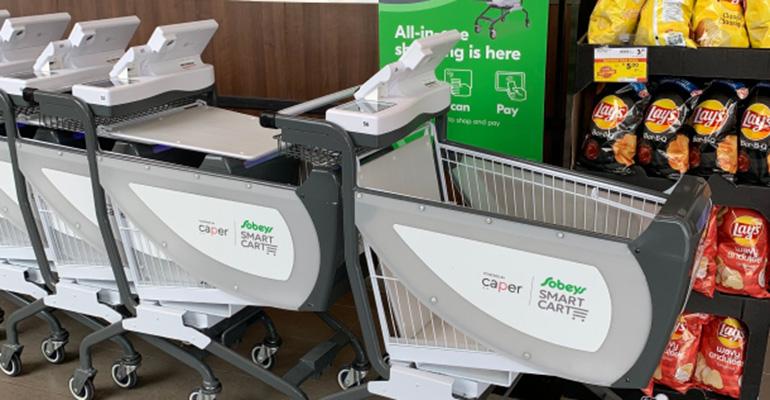 In a $350 million cash-and-stock deal, Instacart is acquiring Caper AI, a maker of smart grocery carts and a cashierless checkout system similar to Amazon Go stores. The AI grocery cart uses cameras and weight sensors to track which products consumers put in their carts; consumers can pay via credit card at the cart, bag their groceries and leave. Tech Crunch reports the company plans to integrate Instacart's app with the smart carts for consumers who shop in brick and mortar stores.

Full Cycle Bioplastics, based in San Jose-California, is trying to make polyhydroxyalkanoate, a biodegradable plastic created by bacteria. And unlike PLA, a plastic that can be composted in industrial facilities, PHA can break down in a composter, in the woods and possibly in the ocean. Even if an animal or fish eats a PHA-created product, they won't be harmed. Co-founder and co-CEO Dane Anderson has eaten it himself, Fast Company reports.

Gorillas—the Berlin, Germany-based company that promises grocery delivery within 10 minutes—has received $1 billion in funding, led by Delivery Hero, another Berlin-based food delivery company. Delivery Hero CEO and co-founder Niklas Östberg says that Gorillas is setting new standards in efficiency and sustainability for delivery companies, reports Silicon Canals. Gorillas was founded in June 2020 and, in the past six months, has delivered more than 4.5 million orders from 180 warehouses.

New Culture and Moolec Science are two of a handful of tech companies trying to figure out alternative cheese. Plant-based oils and nut milks don't have the proteins to make vegan cheese stretch and melt like dairy-based cheese does. California-based New Culture is pursuing precision fermentation, an existing technology through which sugar is converted to casein, the largest protein in cow's milk, according to The Spoon. The United Kingdom's Moolec Science already has produced the chymosin enzyme in safflower plants through the used of molecular farming, AKA genetic modification. Basically, the company uses plants to host target molecules. It's working on making meat proteins with soy and yellow pea plants.