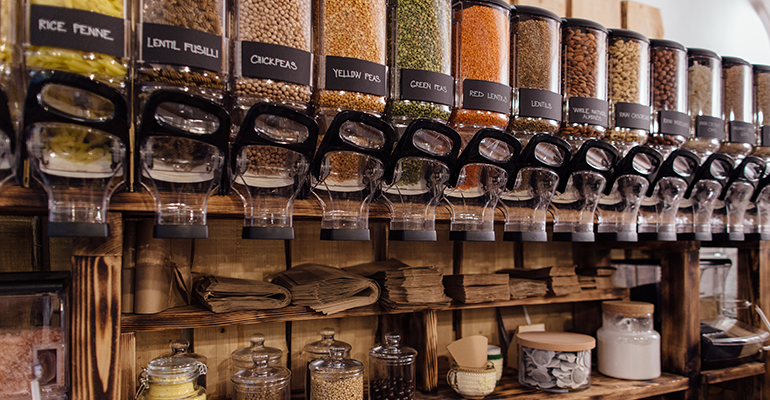 After a COVID-19 hiatus, stores are once again implementing measures to mitigate the plastic waste crisis. The demand for sustainability has only grown, according to experts, and mainstream retailers will be pressured to get in on the action in the imminent future. “Overall, I was very worried that the pandemic would shift the conversation away from waste,” Tom Szaky, CEO of Terracycle and refillable packaging pioneer, told Civil Eats. “It didn’t slow down. In fact, the environmental movement’s only gotten stronger.” But it won't be easy; food has lagged behind household goods in the adoption of plastic-free and refillable packaging for many reasons, two being the fact that disposability is essentially embedded into the modern food supply chain and general fears around food safety and contamination.

It's not just about burping cows. Reducing methane emissions from fossil fuel operations by repairing leaks and upgrading equipment is “one of the best near-term opportunities for limiting the worst effects of climate change,” according to the International Energy Agency. Methane molecules aren't toxic, but they can build up and explode as well as react with oxygen to form harmful ozone pollution. So why have these operations continued to pollute the environment? Well, The Counter notes that the oil and gas industry and its advocacy groups donated $139.6 million to political campaigns in 2020 alone. Natural gas, which powers 40% of the nation's electricity, has been the culprit of several costly and extremely dangerous leaks that are a huge part of the reason why atmospheric methane concentrations have surged since 2007.

Are Beyond Meat's flagging sales a sign Big Cattle's messaging is working?

The plant-based market isn't necessarily showing signs of slowed sales growth, but Beyond Meat's abysmal third quarter earnings has thrown what once-optimistic investors into a tizzy. According to The Spoon, this may be a sign that Big Cattle's anti-plant-based marketing tactics are gaining traction among consumers. Basically, these groups are pushing out thought pieces and commentary that maligns plant-based products as overly processed, unhealthy and unnatural compared to the real thing. But as shoppers' awareness and interest in sustainable food choices rises, could that play a role in Beyond Meat's (and its contemporaries') rebound? Both industries will be watching closely.

Eleven Madison Park Head Chef Daniell Humm recently revealed plans to transition London restaurant Davies and Brook at Claridge’s in Mayfair to a fully plant-based menu. Humm's revamped vegan menu at Eleven Madison Park was deemed poorly executed, to say the least, which has some of the hotel staff worried the transition will lead to the esteemed restaurant's closure. This Eater article also points out that Humm's self-appointed ownership the plant-based revolution is dismissive of the many restaurants in the city that have already achieved excellence in the realm of vegetarian and vegan cuisines.

Much like the plant-based revolution, the robot revolution is in full swing. Walmart, for instance, has started using fully driverless trucking in its online grocery business, and autonomous food preparation robots are becoming more common in restaurant kitchens. Robots are on the rise in agriculture as well; Iron Ox has unveiled a new robot for moving and monitoring indoor farming crops and Dutch robotics company Priva is pushing out a product called Kompano, a pruning robot that can be deployed in a greenhouse alongside human employees. The Food Institute reports.