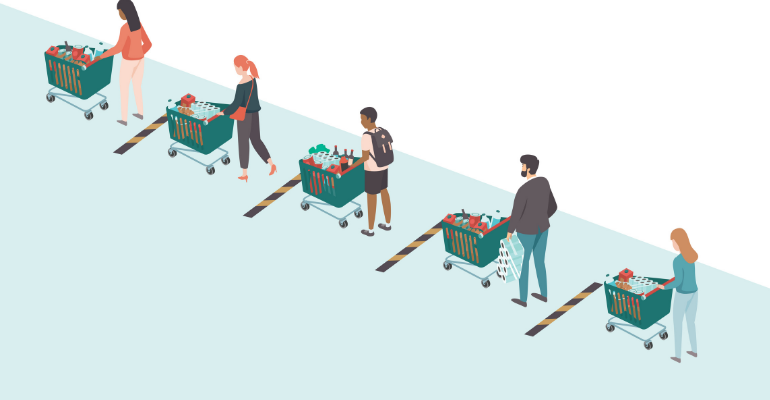 Supermarkets are making sure they have ample supplies of everything from sugar to frozen meat in preparation for what executives anticipate will be some of the highest price increases on record. However, this stockpiling behavior is creating shortages of several staples and is challenging a food supply chain already hampered by transportation costs, labor pressure and ingredient constraints. The move is a reversal from last year when consumers hoarded groceries because of concerns about food availability; now, retailers themselves are stockpiling to keep costs down and protect margins. The Wall Street Journal has the full story.

USDA to review 'Product of the USA' label

The Federal Trade Commission recently announced that any brand voluntarily using the “Product of the U.S.A.” label must now prove that their product was virtually entirely produced in the United States. In response to this the U.S. Department of Agriculture has promised to do a “top-to-bottom” review of the label in an effort to find out what it means to shoppers. Many groups have long opposed the current labeling system, which allowed for meat that was born, raised and slaughtered in another country to be labeled as a “Product of the U.S.A.” if it was simply processed inside the country. Modern Farmer reports.

While corporations are willing to buy credits that pay farmers to pull carbon dioxide out of the air and into their soil, the credits aren’t yet lucrative enough to entice enough farmers to rethink how they grow crops to maximize capturing carbon. Environmental scientists are also increasingly warning against relying too heavily on these kinds of carbon offsetting programs instead of cracking down on the pollution driving global warming. Even persuading more farmers and ranchers to participate in existing conservation programs is tough now that major crops including corn and soybeans are fetching their highest prices in years. Head to Politico to learn more.

Agriculture has been slower to digitize than other parts of the food sector, but regardless of that artificial intelligence, automation and other technologies will play a huge role to play in the future of farming. This is why AppHarvest, a program that retrofits old shipping containers to house controlled-environment vertical farms that grow leafy greens, is teaching high-tech farming to Eastern Kentucky high-school students. Controlled-environment agriculture formats such as high-tech greenhouses and container vertical farms is that they can grow more food faster, at a higher quality and closer to the buying public. Read the rest at The Spoon.

The US health system was already falling short. Then COVID-19 happened

Kaiser Family Foundation researchers recently warned of a “further widening of the gap” between the U.S. and other countries as a result of the pandemic. Life expectancy stateside had already stagnated in the last few years, driven by a rise in drug overdoses and suicides, and COVID-19 will shorten it further. One metric known as "mortality amenable to health care" grades a country’s health system on how well it does in preventing deaths from conditions that should be treatable with timely access to health care and found that the U.S. ranked behind the biggest countries in Europe, as well as Japan, as of 2016. Vox delves into the statistics.