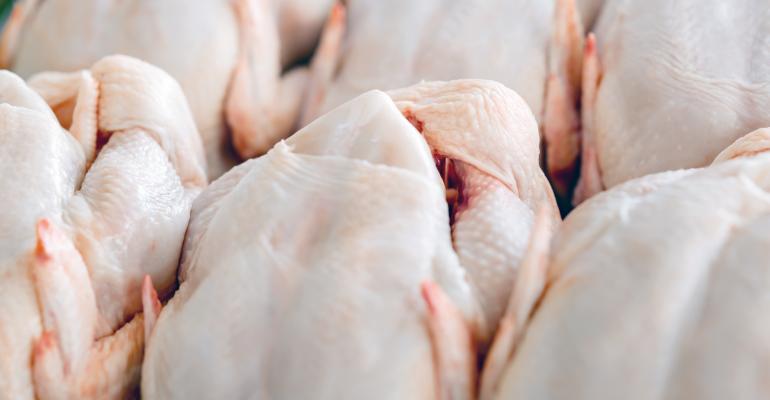 A particular drug-resistant strain of salmonella prevalent in the chicken industry has terrorized the nation since 2018—and it's not slowing down. While European countries have found success reducing salmonella in poultry by targeting farming operations at the source, the U.S. "has failed to bring down the incidence of salmonella food poisoning—even as the rates for E. coli and other bacteria have fallen dramatically," per The Counter. USDA has been criticized for its part in this crisis, mainly because the agency focuses solely on whether salmonella is found in chicken or turkey at the processing plant without considering how much salmonella is in the poultry and how dangerous that type of salmonella is (there are over 2,500 types of salmonella, but only a fraction of these cause the vast majority of illnesses).

Eating meat has a big impact on your carbon footprint. So does eating junk food

Consumers clearly want to eat sustainably and choose products that minimize their environmental impact, but while meat is a huge indicator of one's outsize carbon footprint too little attention is paid to their intake of candy, alcohol and ultraprocessed ready-made food products. A recent study examined millions of shopping records from nearly 60,000 American households and added up the carbon footprints of each diet compared to a diet optimized for health and sustainability; what researchers found was that buying too much food was also a huge factor with regard to outsize carbon footprints. This isn't all to say that cutting down on meat and dairy isn't important, but it does indicate there are many factors that go into the overall sustainability of one's diet. Fast Company reports.

Even though it still hasn't mastered local delivery, DoorDash is debuting nationwide shipping

Last week, DoorDash, the delivery service that currently controls 57% of the market, unveiled national delivery on its platform. The company can now entice restaurants to exclusively use its platform with a value-add that its closest competitor, UberEats, simply can't offer. But Eater points out that DoorDash has treated independent restaurants terribly over the past few years, making it unlikely that many of them will partner with the company to ship their goods across the country, and its customer service is hardly on par with high-end national restaurant delivery service Goldbelly. Notably, the company is still not profitable, and it remains to be seen whether this venture will finally turn the tables in this respect.

Coffee as we know it is in danger. Can we breed a better cup?

The coffee that consumers know and love, that sustains an industry valued at over $100 billion, comes from just two species (arabica and robusta). Both species are currently under attack by warming temperatures as a result of climate change, a deadly fungal disease that has devastated crops and risky farming practices. In light of this, according to Vox, scientists are scrambling to find other, more resilient wild coffee species to breed into the mix, and there are many varieties to do this with. But coffee breeding faces unique challenges; unlike annual crops such as corn that produce a new generation every year, a coffee plant is a tree that takes three to four years to mature enough to produce seeds, which lengthens the process significantly.

Researchers use bacteria to transform plastic into edible protein

The worlds of microorganism-based plastic recycling and food industry precision fermentation have collided! Two U.S. researchers recently created a bio-based process that turns plastic waste into edible protein powder and were awarded over $1 million for their work. With this funding they plan on making their process entirely bio-based, boosting the nutritional profile of the resulting protein powder and adapting the technology to work on a wider range of plastic polymers and other inedible waste. But will consumers ever opt to ingest a product that was made out of landfill-bound plastic? The Spoon delves into the details.