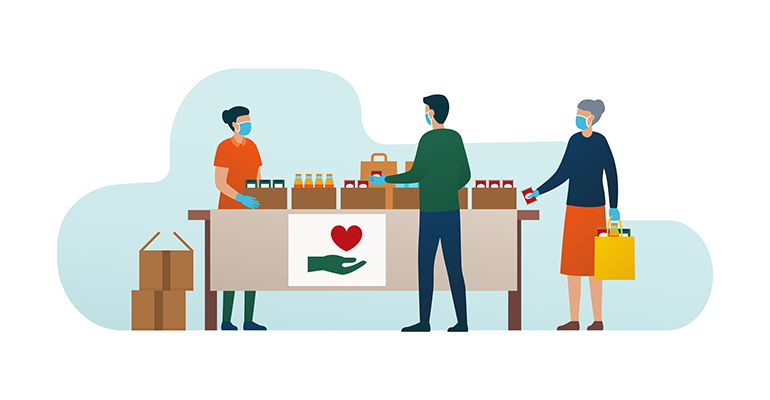 Our hunger crisis is far from over

Census data from May reveals that over 19 million American adults' households "sometimes or often" did not have enough to eat over the past week; that's nearly three times the number who experienced food insecurity in 2019. What's worse is that 25 states are set to withdraw from at least some form of federal assistance by July, citing government aid as a primary reason their residents aren't seeking employement. Experts say this will put an even bigger strain the already suffering U.S. food assistance system, which is grappling with outsize demand and fewer donations. Eater has the story.

An intimidating churn rate is keeping established labor unions and other worker groups from organizing employees inside Amazon’s expansive network of fulfillment centers and delivery hubs. A recent New York Times investigation put the company's turnover at 150%, showing that Amazon was letting go of 3% of its workers every week before the pandemic began. Unfortunately, high turnover means a union would be losing cards every day as workers leave and new employees unfamiliar with the campaign replace them. It could also hurt the union's position at the bargaining table if some of the most active organizers have quit or been fired. Learn more at The Huffington Post.

The Supreme Court this week reversed a lower-court ruling that had allowed six people to sue Nestle USA and Cargill over claims they were trafficked as child slaves to West African farms that supply cocoa to the two giant food companies. While neither company owns or operates farms in Ivory Coast, they had bought cocoa from the farms; they also provided the farms technical and financial resources in exchange for exclusive rights to their produce. CNBC reports.

More proof the upcycled food market is red hot! RIND Snacks, a startup that produces upcycled dried fruit snacks, has raised $6.1 million in a Series A round of funding led by Valor Siren Ventures. RIND’s snacks are available for purchase on the company’s website and in Whole Foods, Wegmans, Meijers and CVS locations across the U.S. The company has also partnered with food delivery services such as HungryRoot and Imperfect Foods in the past. The Spoon delves into the news.

Demand for frozen fare is showing serious lasting power as the world emerges from the pandemic. U.S. frozen food sales rose 21% from a year ago to $65.1 billion, with online sales in the sector increasing 75% in 2020. The top three purchase drivers for frozen foods are ease of preparation, being a quick total meal solution and time savings, according to the American Frozen Food Institute, and retailers are forging new partnerships to meet the sky-high consumer demand. The Food Institute notes that millennials in particular will continue to drive the popularity of frozen CPG food products.