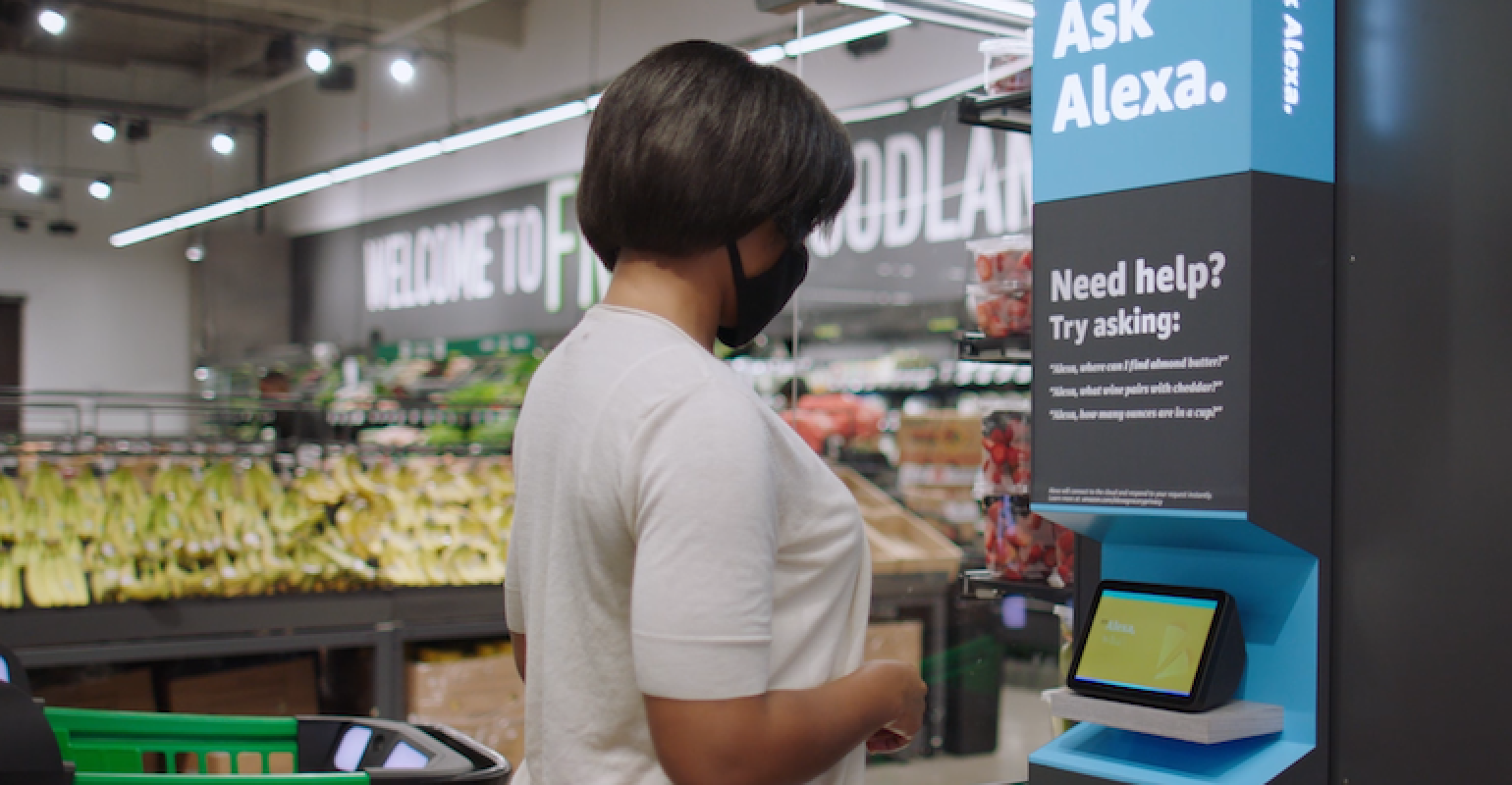 Physical store sales at Amazon fell by double digits in the fiscal 2021 first quarter, even as the retail giant saw overall net sales jump more than 40% and adjusted earnings per share come in 65% higher than Wall Street’s forecast.

Online sales surged 44% to $52.9 billion in the first quarter from $36.65 billion a year ago and were up 41% excluding foreign exchange. Sequentially, online sales were down 20.4% from the fourth quarter, which included the holiday sales period.

Amazon’s physical store sales, which include Whole Foods Market, declined 15.5% (no impact from foreign exchange) in the fiscal 2021 first quarter to $3.92 billion from $4.64 billion in the 2020 quarter. That followed an 8% year-over-year decline in the fourth quarter. Brick-and-mortar store sales also were down 2.5% sequentially from the fourth to the first quarters. Results, too, cycled large gains in sales of groceries and other essential items a year ago triggered by the COVID-19 pandemic. 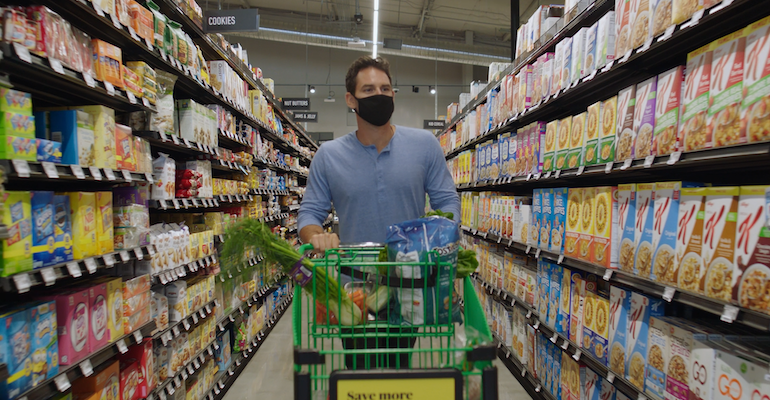 Grocery has been 'a great revelation' in the post-pandemic period, Amazon CFO Brian Olsavky said.

In fiscal 2020, Amazon recorded physical-store sales declines in three out of four quarters, with an 8% year-over-year gain in the first quarter followed by decreases of 13%, 10% and 7% (excluding foreign exchange) in the second, third and fourth quarters, respectively.

Brick-and-mortar store sales were one of the few negatives in Amazon’s 2021 first quarter, according to Jefferies analyst Brent Thill. “Physical stores continue to struggle, declining 16% year over year and falling 9% below consensus,” he wrote in a research note late Thursday.

Earlier this month, Amazon closed four Amazon Go locations, including two stores in Chicago (at Illinois Center and at W. Adams and S. Clark), one store in Manhattan (at 300 Park Ave.) and one store in San Francisco (at San Francisco Centre). The stores shut down on April 2, and associates were offered new jobs with Amazon, according to the company.

“Like other retailers, we regularly evaluate our Amazon Go store locations, and as a result, have decided to permanently close four Amazon Go stores," an Amazon spokesperson said in an email on Friday. "We have offered all impacted employees at these stores new opportunities within Amazon, including at other nearby Amazon Go stores, and remain invested in our vision for Amazon Go as we look forward to opening additional locations over time."

In a conference call with analysts late Thursday, Amazon executives said grocery sales remain on the upswing, and the company has seen promising early results from its new Amazon Fresh supermarkets. Most recently, Amazon opened a 40,000-square-foot Amazon Fresh in Long Beach, California. That banner now has eight stores in California and four in Illinois, while Amazon Go Grocery has two 10,000-square-foot stores—featuring Amazon’s Just Walk Out cashierless technology—in Seattle and Redmond, Washington.

“Grocery has been a great revelation during the post-pandemic period. I think people really value the ability to get home delivery, and we’ve seen those numbers go up considerably pre- and post-pandemic. We’ve also worked very hard to increase our capacity during that time period,” Amazon Chief Financial Officer Brian Olsavsky said in the call. “In the United States, we’re delivering out of our Whole Foods stores, and we’ve allowed a greater expansion of pick-up at Whole Foods stores. Amazon Fresh became a free Prime benefit, as you know, in the late part of 2019. And customers really adopted it, and we continue to see strong growth.” 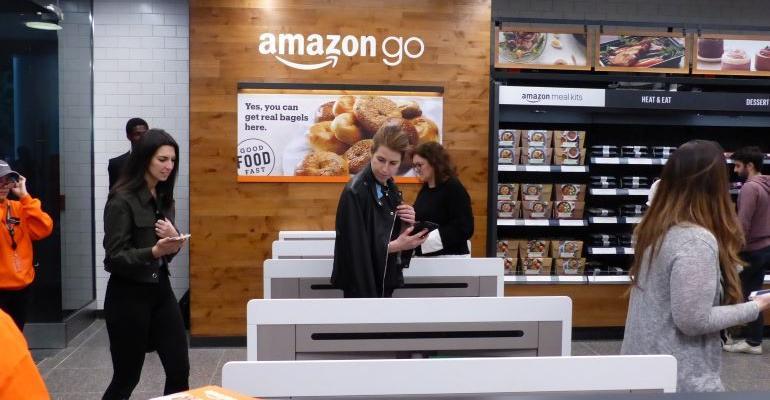 Amazon's Just Walk Out 'skip the checkout line' technology is being tested for a possible rollout to Amazon Fresh supermarkets.

Last month, Bloomberg reported that at least 28 more Amazon Fresh stores are in the works “from Philadelphia to the Sacramento suburbs.” Thus far, Amazon has only confirmed four new U.S. locations, two apiece in New Jersey and Washington state. In addition, Amazon is testing the Just Walk Out technology—used mainly at its compact Amazon Go convenience stores—at the Amazon Fresh in Naperville, Illinois, but hasn’t made it available to the public at the store.

“I think on the Fresh stores, it’s a little too early [to assess performance], the stores themselves,” Olsavsky said in response to an analyst’s question. “We’re confident that the Just Walk Out technology will be a benefit to customers, and we’re very excited about what’s in the works. But that’s still really early, in day one.”

The Amazon Fresh concept has been well-received by shoppers, according to David Fildes, director of investor relations at Amazon.

“We’ve got about 12 Fresh stores right now that are open, and we’ve got some additional ones coming in Southern California, Illinois, New Jersey and then here with us in the Seattle area. So as Brian said, really pleased with the start, the technology and the feedback from the customers so far.”

In its first-quarter reported, Amazon also noted that the expedited its annual fall pay review for its U.S. customer fulfillment, delivery, package sortation and specialty Fulfillment teams. Plans call for more than 500,000 employees to get increases from 50 cents to $3 hour in mid-May through early June, marking an investment of over $1 billion in incremental pay.

“This is on top of our already industry-leading starting wage of at least $15 an hour and the more than $2.5 billion that we invested last year in additional bonuses and incentives for frontline teams,” Henry said in a statement. “These jobs come with a range of great benefits, like medical, dental and vision coverage; parental leave, ways to save for the future; and opportunities for career advancement—all in a safe and inclusive environment that’s been ranked among the best workplaces in the world.

Other teams are continuing with their regular annual compensation review plans, which will occur throughout the remainder of 2021.”