HomeNewsBack to the Roots ready to grow with $2M in funding
Recent
Latest
Podcast: Innovation, sustainability and integrity at PCC Community Markets
May 18, 2022
Whole Foods' honors 30 companies with 10th annual Supplier Awards
May 18, 2022
EarthX Film Festival focuses on healthy food, sustainability
May 18, 2022
6 tips to promote consumer understanding of Certified Organic
May 18, 2022
Trending
Debra Stark’s light shines bright on natural products industry
May 10, 2022
Unboxed: 7 plant-forward ice creams to stock this summer
May 10, 2022
Getting ready for 2023: Trends for brands to consider
May 17, 2022
Hemp CBD industry struggles so far in 2022
May 10, 2022

Back to the Roots ready to grow with $2M in funding

As the Oakland, Calif., company basks in an ultra-successful round of fundraising, co-founder Nikhil Arora discusses what&#39;s in store for Back To The Roots.

The 6-year-old company that brought us organic home-mushroom farms announced today the close of its first round of funding totaling $2 million. Led by the organization Fund Good Jobs, the people who invested in Back to the Roots are just as notable as how much the company raised.

“It’s an honor to have such support, but also humbling because we know how much work we have ahead of us,” says BTTR co-founder Nikhil Arora. “We want to bring the food movement to the next generation. It’s a big responsibility, and our investors are our inspiration. It takes a village to raise a child, and it’s the same with business. It’s not just capital; [our investors] have all been our mentors, too.”

With its line of education-focused products including an aquaponic water garden, organic stoneground wheat cereal, mushroom farms and chia-infused breakfast toppers carried in more than 14,000 retail locations worldwide, BTTR plans to use the $2M to spearhead new product development 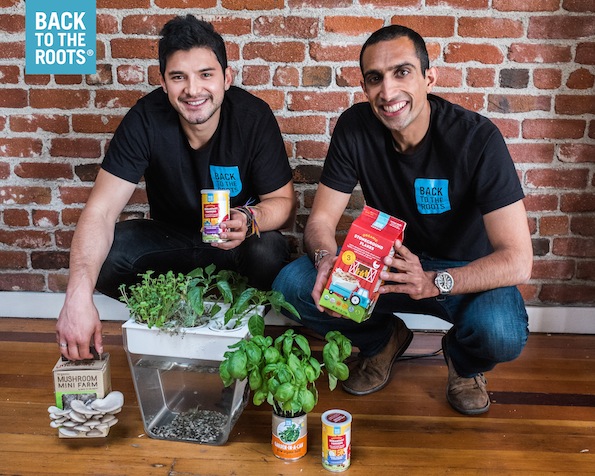 for its consciously made Ready To Grow and newer Ready To Eat lines, as well as to grow distribution. “We started selling in produce. Now we’re looking toward the center of the store,” Arora says. “Grocery products should really be produce that’s cooked a little bit.”

The long-term plan for Back to the Roots is lofty. Besides the mission to become “the new Kraft Foods,” Arora and co-founder Alejandro Velez hope to redefine supply chains for commodity crops like grains. For example, rather than sourcing wheat for its stoneground cereal from myriad farms across the nation, BTTR partners with California-based farms to help build local grain economies. Arora says the next iteration of this model would be to source both wheat and the rotational crop buckwheat (used for the company's organic breakfast toppers) from the same farm. “I think this idea of radical transparency builds in an inherent need for brands to speak directly with their primary producers and farmers—it can't just stop at a co-packer,” Arora says.

Sourcing ingredients from one farm is a risky tactic for supply security. But Arora stresses that building farmer-manufacturer relationships are key to reducing supply risks and and breaking the pattern of commodity crops. “We can communicate forecasting (or changes to it) directly with the producers.”