Home>News
Recent
Latest
Beyond Meat CEO: 'Outcomes are not unexpected'
May 07, 2021
FDA issues procedural notice on potential plans to conduct research about use of 'healthy' symbols on food products
May 07, 2021
How do food co-ops affect their communities?
May 07, 2021
Sprouts sticks to game plan in lapping Q1 pandemic impact
May 07, 2021
Trending
Hain Celestial CEO optimistic as product innovations find shelf space
May 06, 2021
Family strategy: How to run a family—and public—business
May 04, 2021
The 11 pitch slam competitors at 2021 Natural Products Expo West Virtual Week
May 03, 2021
Organic produce shows strength and staying power
May 05, 2021 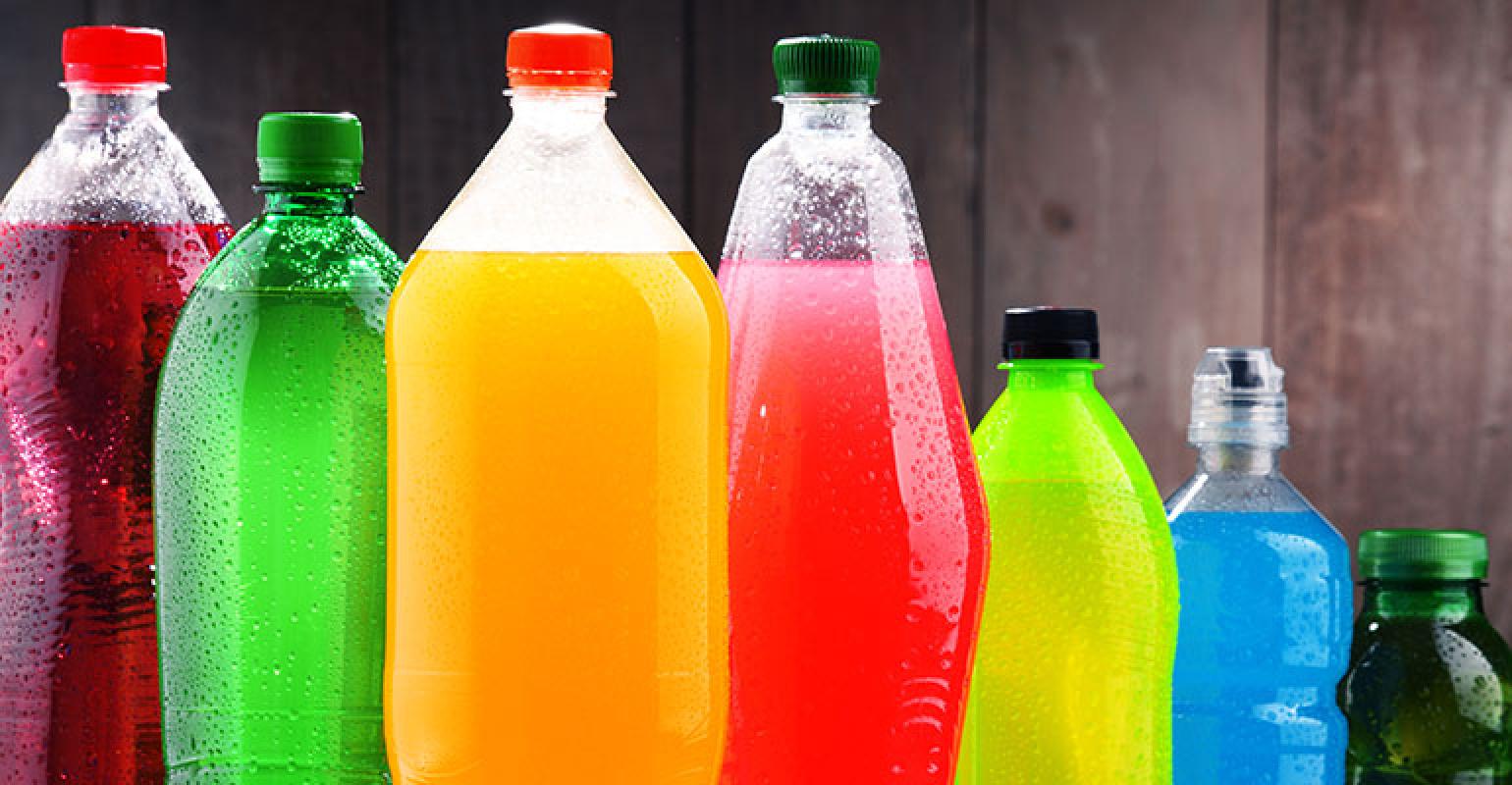 CPGs look to reduce their use of plastics as consumers look for sustainability. But are these moves effective in reducing plastic pollution?

Sustainability, as popular as it is, isn't just a buzzword.

As defined by Webster's New World Dictionary, sustainability means to employ a practice that supports a given condition or a human population without destroying or depleting natural resources.

Sustainability used to be a hippy-dippy concept for businesses to be concerned about. Recently, however, more CPGs are making changes to reduce their environmental impact.

Why the change? Because consumers' concern for the environment has increased and they are looking for solutions. A survey commissioned in part by the National Retail Federation, "Meet the 2020 consumers driving change," found:

The numerous changes can be hard to keep up with, but here's a look at some recent announcements.

Obviously, paper containers aren't feasible for soft drinks, juices, teas and waters sold in plastic bottles. But the bottles don't have to be made of new plastic. 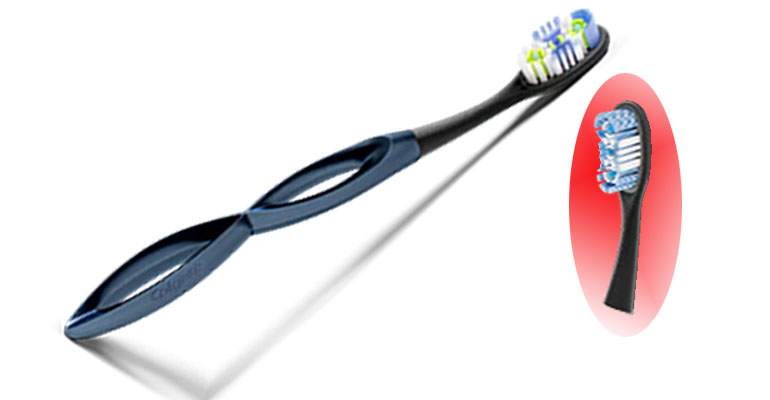 "More and more, people are making the argument that without sustainability you can't even have a successful business," said Vance Merolla, worldwide director of global sustainability at Colgate-Palmolive, which saw net sales climb 5% to $16.5 billion last year. Merolla was quoted by Paul Hiebert in an Adweek story, "Why CPG Companies Can No Longer Afford to Make Products that Harm the Planet."

Colgate-Palmolive in February released Keep, a toothbrush with a snap-on plastic brush head and an aluminum handle, so consumers can throw out just the head when they need to replace the brush. This reduces plastic waste 80% or the equivalent of 400 million toothbrushes in a year, according to Adweek.

Colgate-Palmolive is also changing the composition of its toothpaste tubes to make them recyclable, using the same plastic that plastic bottles are made of. The transformation began in 2019 with the Tom's of Maine brand and continued with Colgate in 2020. By 2025, all of the company's facilities will be making the new tubes, the company says. What's more is that Colgate isn't keeping this technology to itself, but sharing it with other companies, including competitors.

Mondelēz International has set a goal of reducing by 25% or more its use of virgin plastic in its rigid packing. The change will mean a 5% reduction of the company's virgin plastic use overall.

"The virgin plastic reduction target will be achieved through a combination of measures, Mondelēz said, including elimination of plastic material, increased use of recycled content and the adoption of reuse models for the company's portfolio where it makes sense to do so," reports Vending Market Watch. 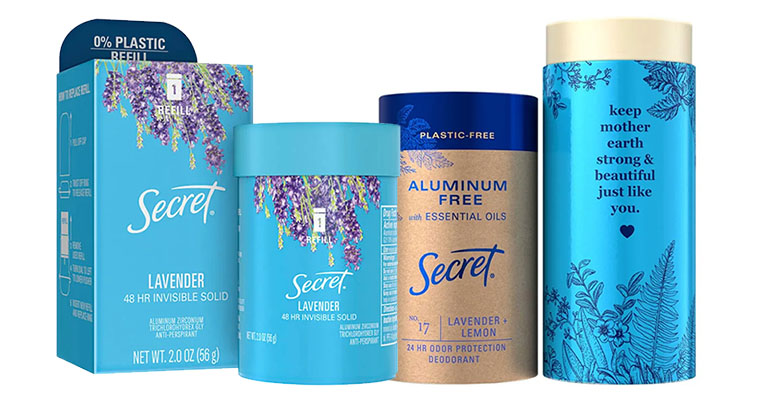 Secret and Old Spice are introducing refillable antiperspirant cases and expanding the use of recyclable paper tube packaging for their aluminum-free deodorants. The refillable cases include a refill packaged in the same paperboard, certified by the Forest Stewardship Council. The products with the new packaging are available in select stores, writes Emily Holbrook in Environment+Energy Leader.

Dove, a Unilever brand, has also created a refillable deodorant, the first step in the brand's initiative to reduce its plastics use, reported Gabriel Rivera in "Corporations shift focus toward sustainability and recyclable products," published at The Ticker. 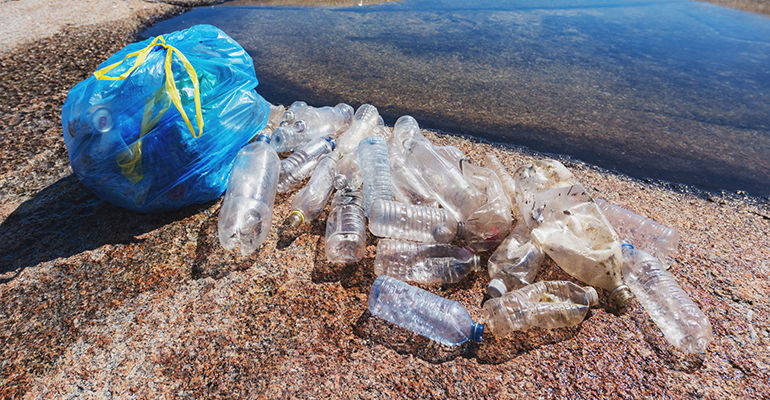 The Ellen MacArthur Foundation in 2018 organized 250 packaged goods companies, recycling companies and governments to end plastic waste. These organizations signed on The Global Commitment to "make all plastic packaging either reusable, recyclable or compostable" by 2025, according to Fast Company.

The latest progress report, issued in December, showed that the signatories aren't making enough changes to reach that goal:

"Significant advances have been made in two key areas: the incorporation of recycled content in plastic packaging, and the phase out of the most commonly identified problematic categories of plastic packaging, such as PS, PVC, undetectable carbon black, single-use plastic bags, and straws.

"However, there has been limited progress on increasing recyclability of plastic packaging and on reducing the need for single-use packaging altogether: progress on shifting towards reusable packaging is limited, and elimination efforts remain focused on a relatively small set of materials and formats."

The Foundation called on businesses to "take bold action" such as creating a credible plan to make recycling effective or move away from plastic packaging. It also asked governments to work together, through the United Nations, and create a framework for building a circular economy for plastics.

Break Free From Plastic, a grassroots organization that advocates for the end of using plastics, annually conducts a global audit of plastic waste. From the 2020 audit, the organization identified the top 10 global polluters as The Coca-Cola Company, PepsiCo, Nestlé, Unilever, Mondelēz International, Mars Inc., Procter and Gamble, Philip Morris International, Colgate-Palmolive and Perfetti Van Melle—all of which are headquartered in the United States or Europe.

Coca-Cola, PepsiCo and Nestlé have been the top plastic polluters for the three years the audit has been conducted. All three are signatories on The Global Commitment, as are Unilever, Mondelēz International, Mars Inc. and Colgate-Palmolive.

“It’s not surprising to see the same big brands on the podium as the world’s top plastic polluters for three years in a row. These companies claim to be addressing the plastic crisis yet they continue to invest in false solutions while teaming up with oil companies to produce even more plastic. To stop this mess and combat climate change, multinationals like Coca-Cola, PepsiCo, and Nestlé must end their addiction to single-use plastic packaging and move away from fossil fuels,” Abigail Aguilar, plastics campaign regional coordinator for Greenpeace Southeast Asia, said in Break Free's release announcing the audit results.