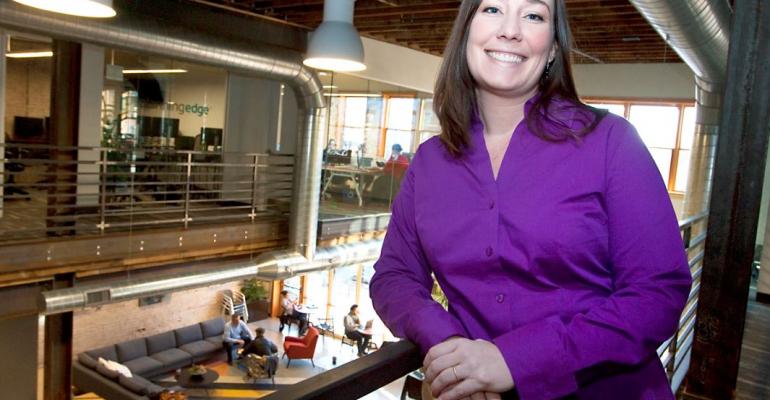 Ashley Colpaart has a tech-powered solution to support the small food renaissance.&nbsp;

The room, spacious and urban hip, is part lobby, part work space and part café. Fifty-foot ceilings reveal two stories of glass walls girded in riveted steel, behind which rustles the busy energy of entrepreneurial activity as ideas bump up against other ideas. This place, the Ft. Collins, Colorado, Galvanize campus, is an appropriate setting for my conversation with Ashley Colpaart. Not just because the 34-year-old Colorado State University doctoral candidate rents work space here, but because her startup, The Food Corridor (TFC), embodies the buzzword “disruptor” so popular within these walls.

“If you would’ve told me 10 years ago I was going to found a tech company I would’ve said, 'yeah right,'” says Colpaart. Yet, as TFC unfolds, it indeed asserts itself as food tech, cyber-servicing both commissaries and the startups in need of the limited resource they provide.

“It’s like Airbnb for commercial kitchen space,” she says. An idea whose timing may be just right: as cottage and craft foods grow exponentially alongside an economy ripe for Uberization. The times are changing, says Colpaart: “There’s a certain amount of creative destruction that’s happening around antiquated rules about things,” and the food industry is not exempt.

“Creative destruction” is an already fitting descriptor for the craft food renaissance, both in

innovation and in rapid growth. Food Business News reports specialty foods sales growth of 19 percent from 2012 to 2014—“well ahead of the 2 percent increase for all food.” Food trucks grew to a $1.2 billion industry in 2015, according to mobilecuisine.com, showing 12.4 percent growth over the last five years. And Nutrition Business Journal reports that the top CPG companies lost $19.1 billion of expected revenue between 2009 and 2014, while natural and organic categories grew by 75 percent in the same period.

“We’re relying on this big food infrastructure that’s not working for our environment or our health,” says Nikki Dugas. Her Boulder, Colorado, Salad Grounds Kitchen Share caters directly to this renaissance, renting commercial space to small producers. “It takes a lot of small food infrastructure to build the small food network,” she says, “and [TFC is] doing that with this idea.”

TFC aims to assist craft food growth with a digital platform that removes roadblocks for small companies—especially those that are ready to scale out of a direct-to-consumer cottage food situation and introduce their goods into a retail environment. “The rules all change when you get there,” says Colpaart. “Now you’ve graduated and you need to produce your food in a commercial kitchen that’s certified by the health department.”

But commissaries can be hard to find, she says, and they may not have the right equipment or the times you need. “At that critical juncture where they’re trying to scale and figure it out, the commercial kitchen not working out could be the breaking point for these businesses,” Colpaart says. A robust online network of resources, including a booking platform, she believes, can support the renaissance—and support the commissaries along the way.

Raised on (micro)chips and hot sauce

Colpaart’s tech-rich approach to the community of craft food production has fitting roots. While her father designed microprocessor chips in 1980s Silicon Valley, her mother ran catering jobs in her Austin, Texas home kitchen, and made hot sauce to sell at the farmers market. The high-tech, low-tech meeting of microchips and hot sauce combined in Colpaart to create an individual ecosystem ripe for tech disruption in cottage foods. A hearty education didn’t hurt either.

Colpaart is a registered dietitian with a degree in food and nutrition from Texas State University and a master's degree in food policy and applied nutrition from Tufts University. After holding a grant-funded farm-to-institution position in San Diego, she returned to school for her PhD. At CSU she orchestrated a mashup of three departments—food science and human nutrition, agriculture and resource economics, and sociology—in order to pursue her passion for food systems.

The idea for TFC began when Colpaart was invited to Washington D.C. to sit on a panel for Community Food Projects—helping to determine how this federal program would allocate grant funding. Nearly every proposal focused on building infrastructure, she says. “Very few had well thought out business plans, very few had done gap analyses of what existed in their communities already or what the demand was for this type of endeavor. I got a little weary of allocating funds to something that didn’t seem like the right answer.”

In D.C., she says, “I was staying in an Airbnb and I took an Uber for the first time. It got me thinking about this sharing economy, or access economy, and if there were ways to apply that to the food system.” Of course there are, she realized. “There’s underutilized commercial kitchen space in every community.” She lists churches, community centers, universities, dinner-only restaurants, bakeries that are done by 1 p.m., and school districts that are closed all summer long. “I was, like, 'are we using the resources we have efficiently before we go build new ones?'” The answer was a resounding no, and TFC was born. Today, TFC consumes most of Colpaart’s attention—as both dissertation research and business startup.

The idea is getting notable attention, too. She’s won pitch contests at Galvanize Ft. Collins and at 33Entrepreneurs in Boulder, and ranked highly in San Francisco’s BonAppetech. In her old home of Austin she won two awards this year, as a finalist for the SXSW Interactive Innovation awards and grabbing a silver medal in the Food+City Challenge Prize. Closer to her Ft. Collins home, TFC just took the top honor—including a $25,000 prize—in the University of Northern Colorado EChallenge Prize in Greeley.

When I first spoke with Colpaart last summer, TFC truly looked like the latest addition to the disruptive, so-called “on-demand economy,” ready to shake up for-rent commercial kitchens. As it has unfolded, however, supporting these kitchens has emerged as the first step. Kitchens whose business model is already to rent out commercial space, Colpaart says, has become the “low hanging fruit” for their software development. “The vision is the same, the path to success is the change,” she says. “We have to build the supply side and build stickiness so people don't go around the platform. It is just a strategy change, not a vision change.”

This full-spectrum of support was, indeed, always part of the long-term strategy. “I envision The Food Corridor becoming a pipeline of innovation for the food sector,” she said the first time we spoke, “supporting the commissary, commercial and incubator kitchens (which are shared-use kitchens that also provide business development to food businesses that are starting) by finding the right education and resources they need to service these folks,” she says. Equipment maintenance, cleaning services and ingredient sourcing all play into the network she envisions.

The commissary kitchens and incubator kitchens represent a big base of 2,500 kitchens nationally. TFC will support these kitchens as an online platform acting as a directory, handling calendaring and even payment.

“In the short term, the value proposition is we’re going to save them a lot of time by facilitating these processes that we know they’re all doing—around communication, scheduling, booking, payment processing, customer management.” Long term, “we’re going to increase their revenue by bringing them new clients. So it’s a two-pronged value proposition.”

Along the way, TFC intends to position itself, “as the expert in shared-use kitchens,” says Colpaart, “with the implication that we’re going to build this product around the market intel that we’re gleaning.”

Enter tier two: the underutilized commercial kitchens original to the D.C. epiphany. “There are 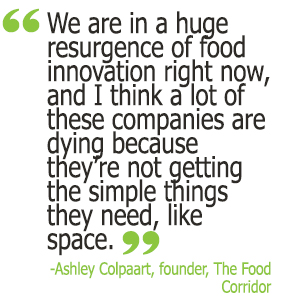 about 100,000 university, school, food bank, church and bakery kitchens,” she says. “We’re actually considering, if they’re a nonprofit like a church or a school, having their fee waived, since part of the benefit we’re bringing to society under our mission for the company is to help those folks monetize their underutilized assets.”

Restaurants will eventually roll in as a third tier. “There are over 650,000 of those with marginal assets,” Colpaart estimates.

“Have you seen my website?” asks Scott Sucaet of Rocky Mountain Commissary. “It’s terrible!” When he bought the Denver area business three years ago, he planned to fix up the website, but as he learned the business of managing dozens of clients in 13 commercial kitchens under one roof, “I had way more important things to spend my money on than my website.”

Sucaet’s clients lean on him for much more than kitchen space. They’re startups in need of an education, and maybe TFC can take some of this off of his plate. “I’m visioning [TFC] as a qualifier and a place that people can go to educate themselves, and then through education realize, 'hey, I need a commissary, hey, I need a food scientist, hey, I need an insurer to do liability insurance,'" he says.

Admittedly, as the second tier kitchens roll in, TFC will be both supporting and competing with commissaries like Sucaet’s. Colpaart’s vision, however, is that as TFC grows, so does opportunity for small food startups. The result will be more business all around.

“We are in a huge resurgence of food innovation right now, and I think a lot of these companies are dying because they’re not getting the simple things they need, like space,” Colpaart says. “If I can solve that one problem and then start adding on and solving more problems, then we’re really supporting the whole.”

Salad Grounds’ Dugas thinks so, too. “I’m not so interested in worrying about the competition,” she says, “because I think collaboration is the new competition and I think that what [TFC is doing] will just provide more access to small food and to building this infrastructure of small food that we really need.”

Katharine Lee of Modern Gingham Preserves believes this is true, asserting that a TFC would’ve made her early years smoother. When Lee started, she did it late at night in a Denver kitchen rented from a pasta restaurant she found on craigslist. She’s since moved through a couple of area commissaries.

Lee finds a great philosophical affinity with TFC, too, which points to the broader social and environmental motives endemic to the entire craft foods movement. “My business is predicated on picking fruit that people don’t want,” she says, referring to Modern Gingham’s model: making preserves from found or foraged local fruit. “This is the same idea in my mind,” she says. “It’s using resources that are available that are really not being utilized to the best of their ability.”