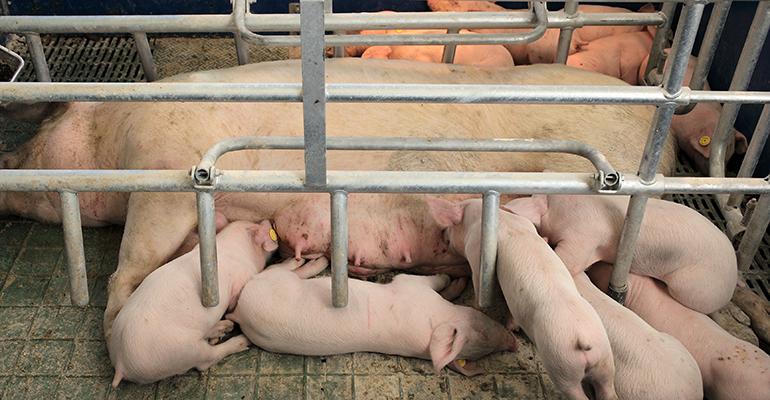 Pork producers get small win as they wait for Supreme Court to decide constitutionality of Proposition 12, which regulates sow gestation conditions.

The Superior Court for Sacramento County in California will halt enforcement of Proposition 12 because the California Department of Food and Agriculture is more than two years late finalizing regulations outlining what is expected of pork producers. The ruling delays enforcement until 180 days after the final rules go into effect.

In 2008, the voters approved Proposition 2, the Prevention of Farm Animal Cruelty Act, which took effect Jan. 1, 2015. With exceptions, Prop 2 banned three forms of animal confinement: "gestation crates for pregnant pigs, veal crates for calves, and battery cages for egg-laying hens." Prop 2 did not prohibit sales of food derived from animals wrongly confined. In November 2018, the voters built upon Prop 2 by approving Proposition 12, the Prevention of Cruelty to Farm Animals Act. The Act's stated purpose is to "prevent animal cruelty by phasing out extreme methods of farm animal confinement, which also threaten the health and safety of California consumers, and increase the risk of food borne illness and associated negative fiscal impacts on the State of California."

The updated constitutional amendment seeks to not only require pork raised in the state to not be raised using sow gestation crates, but also to any pork consumed in the state to meet the same standards. After Dec. 31, 2021, confining a breeding pig with less than 24 square feet of usable floorspace per pig was considered "confined in a cruel manner."

The court ruling notes that petitioners have asked for a delay in enforcement until 28 months after CDFA and California Department of Public Health promulgate final regulations.

"In the court's view, the Jan. 1, 2022, date was calculated at least in part to allow producers to construct new enclosures after the act took effect. Consequently, although the court agrees that petitioners are entitled to a delay that extends past the date on which regulations are enacted, it disagrees that 28 months are required," the judge writes.

The North American Meat Institute and its members are opposed to Prop 12 and urged the State of California to delay its implementation of the law due to the risk of criminal sanctions and civil litigation for non-compliance.

"Judge Arguelles' decision recognizes the complexity of the pork supply chain and the burdensome and costly provisions of Prop 12," says Julie Anna Potts, president and CEO of the North American Meat Institute. "To enforce the law without final regulations leaves the industry unsure of how to comply or what significant changes must be made to provide pork to this critical market."

American Farm Bureau Federation President Zippy Duvall says AFBF is pleased the Sacramento County Superior Court recognized that the state of California has rushed implementation of Proposition 12 without clear rules on how it will be enforced. "California voters were told the law would improve animal welfare and food safety, but it fails to accomplish either of those goals," Duvall says.

He adds the ruling is another example of inherent flaws in Proposition 12. "Besides putting unfair pressure on retailers, it takes away farmers' flexibility to ensure hogs are raised in a safe environment. Small farms across the country will be forced to make expensive and unnecessary changes to their operations, which will lead to more consolidation and higher food prices for all of America's families," Duvall says. "It's imperative that the Supreme Court address the constitutionality of Proposition 12. The laws of one state should not set the rules for an entire nation."

National Pork Producer Council General Counsel Michael Formica, says, ﻿"NPPC applauds the California Superior Court decision recognizing the need for additional time to comply with the rule's onerous, unconstitutional regulations, so that the supply chain can continue to supply pork to California. Yesterday's decision, however, is only a temporary reprieve. America's farmers are still awaiting to hear if Supreme Court will hear their challenge to Proposition 12, and its clear violation of the dormant commerce clause. If allowed to be fully implemented, Proposition 12 will cause catastrophic financial harm to America's family farmers, driving many out of business and undermining the overall global competitiveness of the U.S. pork industry. "

The U.S. Supreme Court has for weeks thought to release its decision on whether to take the NPPC-American Farm Bureau Federation case challenging California's Proposition 12, which bans the sale in California of pork from hogs born to sows raised anywhere in housing that does not meet the state's arbitrary standards.

The NPPC-AFBF case, which argues that Prop. 12 violates the Constitution's Commerce Clause, limiting states' ability to regulate commerce outside their borders, was relisted from the SCOTUS conference on Jan. 14 and again on Jan. 21.

An announcement from the high court on whether it will accept or reject hearing the case is expected soon, NPPC said.

This piece originally appeared on Feedstuffs, an Informa Markets sister website. Visit the site for more information and analysis of the animal agriculture industry.