Can Bayer and Monsanto feed the world? 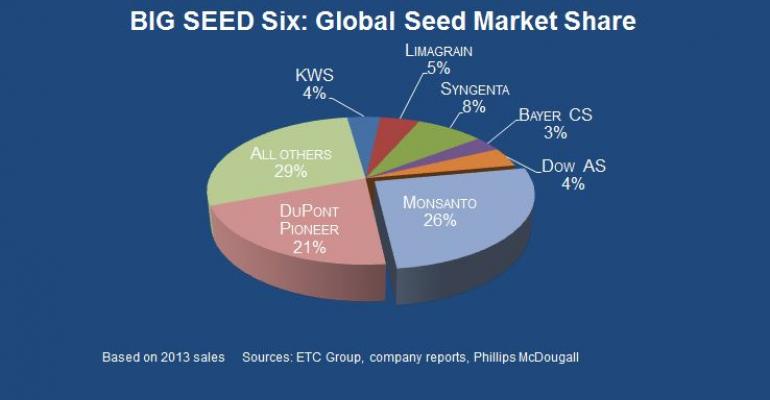 Current status of seed ownership--before the big mergers that are currently under review.
What the consolidation of giant seed companies means for the future of food

It’s on the table again. The conglomeration of conglomerations marches on. Not long after Monsanto’s failure to secure its bid to purchase Syngenta, Bayer made their initial bid to buy Monsanto. News last week suggests the companies have made an agreement for a buyout at $66 billion—including debt reallocation. Meanwhile, Dupont and Dow are in the final negotiations of their merger, and Syngenta found new suitor in ChemChina.

That's quite a mouthful. What is boils down to is that five of the big six seed companies (Syngenta, Bayer, BASF, DuPont, Monsanto and Dow Chemical) are in negotiations. If these mergers go through, three companies will own 69 percent of the world’s seeds. Even if they don’t, we’re left with the present oligopoly.

Related: Bayer and Monsanto and the supplement story

What this means for food production

Agricultural biodiversity has taken a hit in the last century. A huge hit. The U.N. Food and Agriculture Organization estimates a 90 percent reduction of varieties in cultivation—a near extinction of what feeds us. With this narrowing comes a one-size-fits-all approach to agriculture that eliminates the nuance of bioregionalized plant varieties. Without regionally adapted crops, farmers become more dependent on agricultural chemicals.

“The seed that a farmer uses not only affects the quality and the nutrition of the food, but also the ecological impact of how that food is produced in terms of impact on the soil, the water, on farm worker health,” says Matthew Dillon of the Clif Bar Family Foundation, through which he leads the Seed Matters initiative. Launched in 2010 to improve organic seed, the group funds organic plant breeding and advocacy work to raise awareness about challenges that face the seed community.

After 25 years of seed company consolidation, Dillon says, “it’s gotten to the point that we have these five or six big companies—mostly firms we know as chemical and pharmaceutical companies—that now also control the direction of our crop research.”

This narrowing of diversity makes crops more input dependent and less adaptable to a changing climate. What we need instead, Dillon says, “is a decentralized model that allows for greater diversity and which makes us more able to respond to climate chaos.”

When agricultural cultivars are bred in concert with the development of agrichemicals, a dependency ensues—in corporate board rooms and on the farm.

“In plant breeding,” Dillon says, “the goal is you’re breeding a crop for the environment in which it’s intended to be planted.” Dillon defines environment as geography, climate and temperature as well as soil nutrients, pest pressures and the biodiversity that’s going to exist with that crop. “When you breed crops for conventional farming environments,” Dillon continues, “you’re breeding them to work well with conventional inputs,” like synthetic fertilizers and pesticides. These varieties aren’t likely to be as hardy or as resilient “to the stresses that we have in organic systems,” he says. Indeed, the stresses we have in the natural world. “You’re really breeding chemically dependent crops.”

The result of this is higher runoff “of nitrates and agricultural chemicals into our water supply and our soil,” Dillon says. This affects farm worker health, air and water quality, and macro and micro ecosystems all the way down to soil microbiology.

The connection between the corporate consolidation and increased chemical use is a direct one. “Their goals are to sell seed and to sell chemicals,” says Dillon. “So if they can develop crops that require these chemicals that they also sell, that’s a big bonus.” For them. Not for the greater farm ecosystem.

What this means for organic agriculture

“Consolidation in the seed industry leads to less choice for all farmers,” writes Kristina Hubbard, director of advocacy and communication for Organic Seed Alliance, responding to New Hope Network by email. “Organic farmers in particular are already underserved by the seed industry because the dominant players only invest in seed technologies and chemical production systems that are in conflict with organic farming practices.”

Mega-mergers make it harder for smaller companies to compete in the marketplace, Hubbard continues, including those that serve the needs of organic farmers. “Because the largest firms have no genuine interest in supporting organic agriculture, they make few [varieties] that aren’t treated with chemicals prohibited in organic production.”

Organic crop varieties need to be bred for organic conditions. Like higher weed pressures, say Dillon. “One of the reasons yields lag behind in organic vs. conventional is that organic farmers are planting seed that was bred for conventional agriculture,” he says. “There’s a real lack of seed bred specifically for organic, and organic farmers remain underserved.”

“Access to appropriate genetics for organic seed production will likely become even more difficult should the Monsanto and Bayer merger go unchallenged,” says Hubbard, “not to mention the other seed industry mergers already announced.”

What can be done?

Seed Matters is taking the matter to Washington. Their letter to the USDA and presidential candidates asks the DOJ to “block the proposed merger of Dow Chemical and DuPont, the potential merger of Bayer and Monsanto, and any subsequent merger attempts between the Big Six agrichemical-seed companies.”

According to the letter, “the seed needs of many farmers are not being met due to consolidation stifling innovation in plant breeding and a decades-long decline in federal funding for public plant breeding. U.S. agriculture has become overly reliant on crops bred for pesticides and synthetic fertilizers while ignoring the greater agricultural need and consumer demand for crops that have less of a negative impact on our soil, water and health. We must take a more diversified approach to crop improvement to develop cultivars that reduce agricultural impact on natural resources, reduce risks of chemical exposure for rural communities and improve the nutritional quality of our food.”