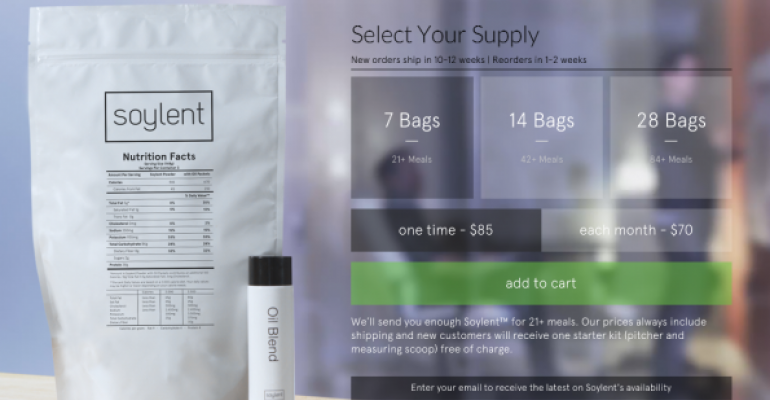 A shake whose makers claim packs in all the nutrients required to live has big press and huge orders but industry leaders in the nutrition space question the long-term business outlook.

Few products can claim more press in more places with more followers in more forums than Soylent, “the simple and affordable nutritional drink that has everything the healthy body needs.” It’s a concept born in a San Francisco apartment and now racking up millions of dollars in sales.

And few products can claim a more negative popular response. A reporter at the The New York Times lived on nothing but the powdered nutrition mix for a week and a half and called it “a punishingly boring, joyless product.” The headline read “The Soylent Revolution Will Not Be Pleasurable.” At theguardian.com, Adam Gabbatt wrote of his week on the all-Soylent diet: “I was irritable, grumpy and a general pain in the arse.” Comic Stephen Colbert asked Soylent CEO Rob Rhinehart this: “What was the inspiration for this? Did you see someone in a coma with a feeding tube, and you thought, ‘I’ll have what he’s having?’”

Still, the adage holds that “there’s no such thing as bad press” and at least for Soylent, the notice and novelty are working. The startup picked up $1.5 million from high-profile investors—including Andreessen Horowitz and Lerer Ventures—last year and, in June, demand grew so far ahead of supply that the company’s blog posted a disclaimer—“Orders placed after 5/6: Shipping in 10-12 weeks from order date.” A year ago, Rhinehart hit his $100,000 Kickstarter goal in less than three hours and watched the take climb to $755,000. If a nutritional product ever went viral, it was Soylent.

“This seems to be a diet supplement for geeky men more than anybody,” says Adam Dachis, who penned a piece for Lifehacker.com on the mix-it-yourself movement that Soylent spawned—“A bunch of gross stuff,” and “I almost threw up,” says Dachis of the homebrew concoctions. That geeky men demographic is not small, Dachis observes, noting that they make up much of his readership, and the Soylent makers may have that legion of pale programmers mostly to themselves. “They have kind of separated themselves from meal replacement diet drinks. They don’t want to market themselves toward that, as far as I can tell,” he says. “It almost seems like a fake science fiction thing when you watch the video they have on their web site.”

Indeed, the marketing and the message, unique and geeky as it is, is clearly Soylent’s most important accomplishment, say industry insiders who haven’t tasted the product but have followed the story. The principal value is certainly not the product, or even the concept. “There’s no absence of powder-based make-a-shake type products,” says Brad Barnhorn, beverage industry authority and investor. “There are certainly other competitive players out there, many players who have a powdered shake that has a pretty complete nutrition profile.” Randy Kreienbrink, a food scientist and director of marketing at BI Nutraceuticals, read the ingredient list. “It’s not a very clean label. If you read it, it’s got every single chemical in there,” Kreienbrink says. Though natural foods marketing expert Jeff Hilton at BrandHive applauds how Rhinehart turned the audacity of “replacing food” into a headline-grabbing brand, he doesn’t see it as much more than a meal replacement. “Then you’ve got competition out your eyeballs,” Hilton says.

With Soylent, the story is the product, and the basic story is repeated in every piece of coverage: Working on a startup to build inexpensive wireless networks, Rhinehart realized he didn’t have time to eat, and, paying San Francisco rents, he couldn’t afford to eat, at least not nutritiously. He read up on nutrition and chemistry, ordered the components and mixed up a food replacement that he claimed was cheaper and healthier than traditional food. The startup, struggling to justify its existence in the crucible of a notable tech incubator, Y Combinator, changed direction and Soylent was born. Rhinehart’s “How I stopped eating food” blog post went viral. The Kickstarter phenomenon boosted the profile, and headlines followed. Investors came in. Orders passed $2 million in January. The first shipments got bagged and boxed in April.

That’s the story as it has been told in countless articles and interviews. Rhinehart and Soylent did not respond to interview NBJ requests.

The question for industry insiders quickly becomes whether a story like Soylent’s can sustain a brand, and whether novelty and changing-the-concept-of-nutrition audacity can reach beyond those first curious customers.

Barnhorn is skeptical. A good story gets attention, and good nutrition garners good intentions, but taste is always the final chapter. That’s true for any beverage, but for a “regimen” product it becomes paramount. “You’ve got to win with the taste experience,” Barnhorn says. Regimens are hard to follow without a tangible, on-the-tongue reward. “The head says I will eat this or drink this because it’s going to be good for me, but that lasts a short amount of time.”

With Soylent, the “it’s going to be good for me” message is still open for debate. An article on Venturebeat.com uncovered a Japanese university study proclaiming “Soylent-style powdered food shows bad long-term consequences in mice.” Kreienbrink, who says he has “worked on just about every protein drink there is,” doesn’t need a study. Drinking nutrition shakes as a sole source of nutrition is dangerous. “If you just stayed with this, you might have some major liver problems.”

Of course, limiting your diet to any product, even a particular food is dangerous. Man does not live by bread alone. He doesn’t live by powdered shake mix alone either. Safety issues are really the only problem Justin Prochnow sees. An expert on FDA regulations at Greenberg Traurig, Prochnow sees Soylent presented as food, a qualifier with few regulatory complications. “There are no specific definitions or parameters for what can be sold as a meal replacement product. The FDA has no real definition for it,” he says. That doesn’t mean an enterprising lawyer could not find grounds for a suit. Positioning a product as an all-your-meals replacement raises that risk. “When you are making that type of claim as guaranteed, you run the risk that if somebody discovers adverse consequences you could potentially be on the hook for some litigation,” Prochnow says. The risk isn’t high, however, particularly in Soylent’s target market—“How do you say it’s the product, and not that you are working 23 hours a day?”—but it’s real and it could have consequences. Such is the life of entrepreneurs and product innovators. “The biggest risk to me would be if somebody looks at it, and says, ‘Hey, there are some safety issues,’” Prochnow says. “That is likely the only way the FDA would get involved.”

In truth, Rhinehart isn’t recommending it as a replacement for all food, though he claims his nothing-but stint improved his health. He talks about other food as “recreational.” The recreational aspect of food is not a priority for the “geeky men” Dachis describes as the target market, but it certainly matters to most of the other 7 billion other people on the planet. “Terribly sad,” is what food scientist Kantha Shelke, prinicipal at Corvus Blue and NBJ advisory board member, says of Soylent’s concept. “What immediately impressed me was the absence of emotional, sensual, and tactile adjectives applied to the product. Pleasure and nutrition should never be separated.” Kreienbrink has also been following the coverage. “I would say nine out of ten people say the flavor sucks,” Kreienbrink says, but he also says he has seen similar products find surprising success. He recalls a bland protein bar launched in the early ‘90s that is still on the shelves. “They just did the right marketing and they took off,” he notes, adding that the sports market is different than the one Soylent appears to be pursuing. In sports, he says, sentiment holds that “if it tastes just a little bit bad, it’s probably working.”

That sentiment hasn’t existed in meal replacement for very long, Barnhorn says. The value proposition of functional food doesn’t include a choice between function and taste anymore. Taste, he says, “has gone from an either to an and. They need to make sure they are nailing the and, not just the or. The hurdle is raised for Soylent. They’re asking people to forego all the pleasurable things you want to eat.” The convenience and questionable low-cost—you could live off Soylent for approximately $3K per year—may not be enough to clear that hurdle.

Even if the product passes the taste test and gets Barnhorn’s “and,” there are all the challenges remaining of delivering a food product to market. Soylent is months behind on orders for what is basically bags of powder. “Once you get past the novelty and the ingredients, you run into all the fundamental business challenges,” says Barnhorn.

After all of the negative taste tests, the business hiccups and the threats of competition (there’s even a vegan, non-GMO Soylent knock-off available called Ambronite), the question becomes this—How did they get that funding? Barnhorn has an answer. Just as consumers are brought in by a novelty that borders on notoriety, investors from outside the food and beverage space could also succumb to “the story.” That’s especially true in the Bay Area, where Soylent was originally based. “In this environment, a story’s enough to raise a pretty good chunk of capital,” Barnhorn says. Is Soylent really disrupting nutrition, or is it basically Ensure with Spock ears? Dachis has tread deep into the lifehacker world. He knows those “geeky men” demographics are bigger than many realize, but he also knows their attention span is ever fleeting. “They’re really into it, but they are really geeky and I don’t know that they would know what to do with a broader audience,” says Dachis about the Soylent founders Soylent won't be the next big thing forever. A year from now, his readers could be back on ramen and Mountain Dew. 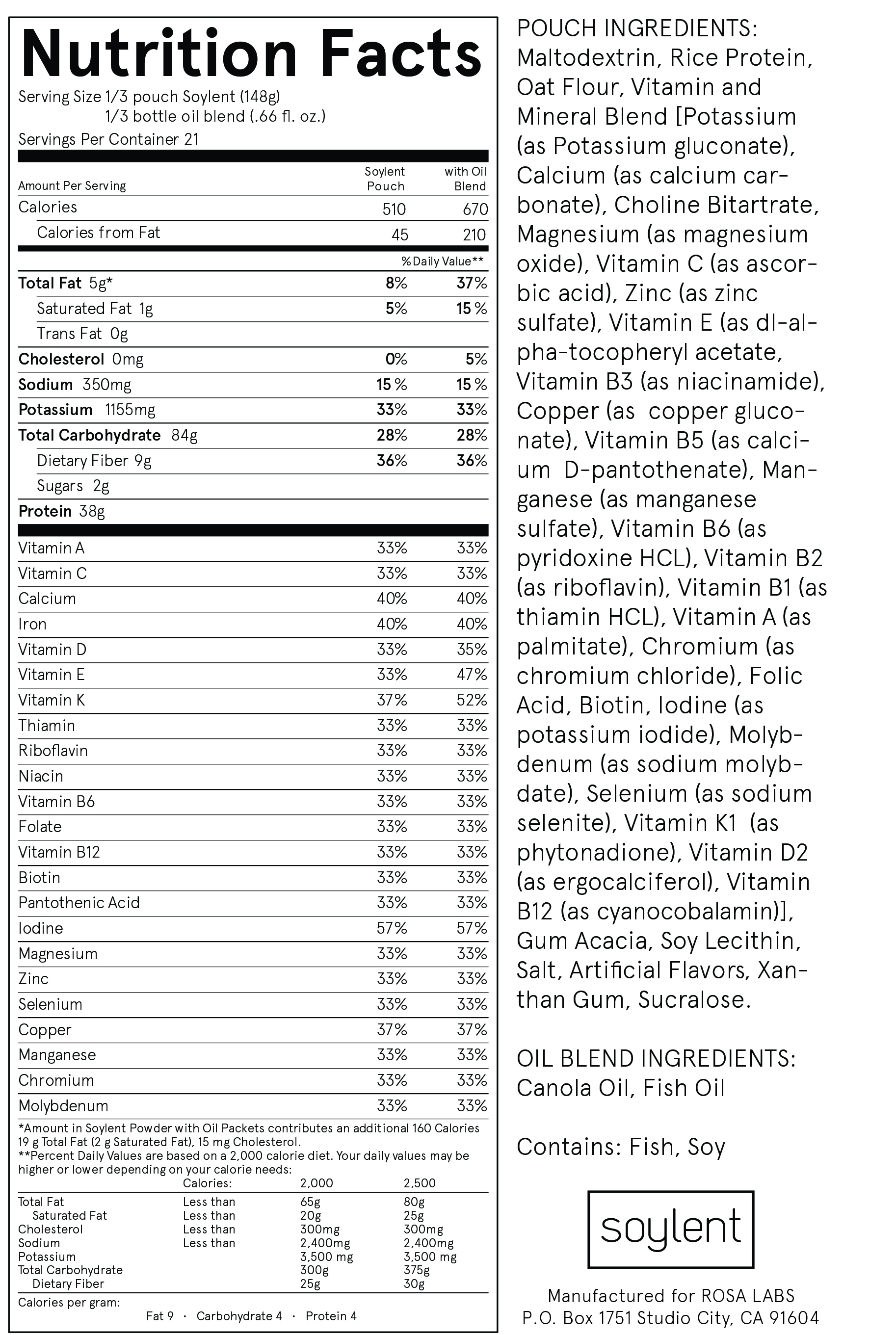