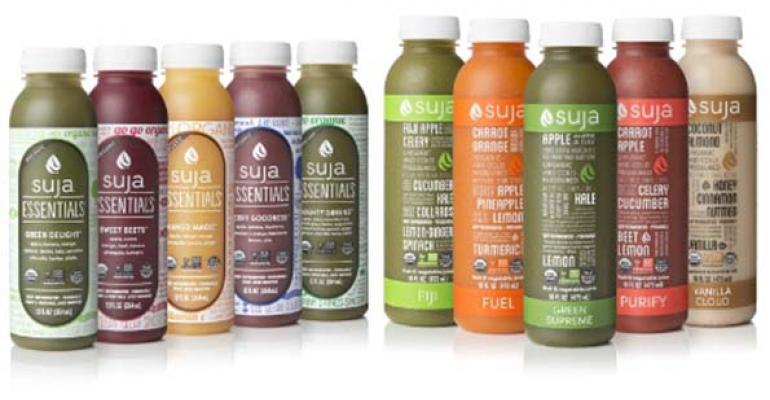 The juice maker says investment deals with The Coca-Cola Co. and the Merchant Banking Division of Goldman Sachs will provide it with expertise and accessibility to expand its distribution and manufacturing capabilities.

Suja Life LLC., named the No. 2 Most Promising Company in 2015 by Forbes, is pleased to announce an investment and distribution partnership with The CocaâCola Company. Coca-Cola's minority investment will increase the availability of Suja, moving the brand closer to achieving its mission of democratizing organic, cold-pressured juice. The CocaâCola Company will also begin distributing Suja through the Odwalla chilled direct store delivery system. In addition, the Merchant Banking Division of Goldman Sachs has made a minority investment in Suja. The closing of these deals provides Suja with the expertise and accessibility to further increase product distribution and operational efficiencies, as well as the ability to expand its manufacturing facilities to increase capacity in response to growing demand.

"When we started our home-delivery juicing company in San Diego about three years ago, we couldn't have imagined the incredible growth and consumer demand that we face today," said Jeff Church, Co-Founder and CEO of Suja. "As we continued to innovate and find ways to democratize juice, we soon realized that for us to take the business to the next level in providing organic, cold-pressured juice to even more people, we needed to find the correct strategic partners. As these new partnerships begin, nothing will change in Suja's promise to its fans: our juice will always be organic, non-GMO, cold-pressured and free of any additives."

Suja has experienced unprecedented growth in the natural foods and conventional channels, quickly rising in ranks to become one of the most popular cold-pressured juice brands in the country. However, since day one, the company's mission remains the same as it is today—to democratize the best quality juice, with the goal of getting organic, non-GMO, cold-pressured juice in the hands of as many people as possible. The brand's first step in realizing this mission was the launch of Suja Essentials—the first USDA organic, non-GMO, cold-pressured juice available for less than $4. In Suja's second step toward completing its brand mission, it realized the need to partner with a large and expert organization like The Coca-Cola Company to help provide additional support, specifically as it pertained to distribution, efficiencies and capacity expansion.

"Suja's commitment to excellence in its beverages, operations and mission has positioned it as a leader in the rapidly-growing organic juice segment," said Mike Saint John, president, Value Added Dairy and Natural Health Beverages, Coca-Cola North America. "This, coupled with the resources of The Coca-Cola Company including our unmatched distribution system, will expand availability of this delicious beverage. Suja's great-tasting, organic juice will nicely complement our broad portfolio and expand it further to meet people's beverage needs."

The benefits of the partnership with The Coca-Cola Company and the Merchant Banking Division of Goldman Sachs will quickly be evident to consumers as they begin to see Suja in even more places. Behind the scenes, Suja will continue to innovate and push boundaries within the health and wellness space while remaining committed to its promise to consumers. Suja's juices and smoothies will always be USDA Certified Organic and Non-GMO Project verified, and will always be cold-pressured using High Pressure Processing to kill any harmful bacteria and preserve maximum nutrition and taste. Suja will never compromise on the quality of its ingredients, delivering convenient nutrition in each and every sip, and all juices and smoothies will be free of artificial and natural flavorings, preservatives, additives, and artificial ingredients. Throughout this all, Suja remains thankful to their loyal fans who have consumed over 40 million bottles since the brand launch.