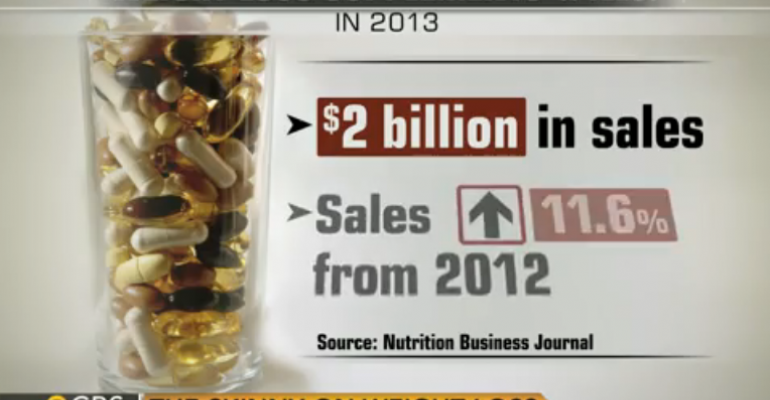 CBS News invited Consumer Reports Deputy Editor Trish Calvo in to discuss the magazine&#39;s report on weight loss supplements. No counter argument was offered to defend them. Is there one? &nbsp; &nbsp;

If the nutritional supplement industry has an image problem, it can thank the weight loss category.

Weight loss products were the prime suspect in the disastrous Dr. Oz Senate appearance, when Sen. Claire McCaskill scolded the TV doctor. The sketchy late-night ads and infomercials shotgun the industry’s credibility. Now it’s Consumer Reports with a survey and article timed for New Year's resolutions with the headline “Taking diet pills? Don’t waste your money.” It’s bad news for an industry struggling for credibility after a tough couple of years but great fodder for the news media as we see in Tuesday’s CBS This Morning segment.

(Watch the video on CBS.com here)

NBJ statistics on sales growth are quoted in the segment, but Consumer Reports Deputy Editor Trisha Calvo quickly moves to all the anti-supplements talking points about insufficient regulations, side effects and efficacy. “They are not effective,” she says. After the co-hosts stop laughing about outrageous ad claims, she goes on with, “There are a lot of supplement manufacturers and there are a lot of claims being made and the lines about the regulations are not very clear.”

TV segments and surveys like these obviously don’t help the industry at large, but the industry isn't doing much about it. At NBJ we have been talking about what the nutritional supplement industry’s value proposition needs to be. It’s surely not fat burning and dropping dress sizes. As former NBJ Editor Marc Brush asked in July: "Nobody can tell the 'real story' of dietary supplements until we get that story straight.” Before, the industry can rally to move media attention away from diet pills and sketchy sports supplements, it has to agree on what the true message is and be prepared to call out the companies and suppliers who can’t follow the conversation where it needs to go. Overhyped weight loss supplement companies cannot be allowed  to be the face of the industry.

But should anybody really try? Maybe somebody in the industry should have grabbed a seat on Calvo's side of the table.