COP26: What about the world's food system? 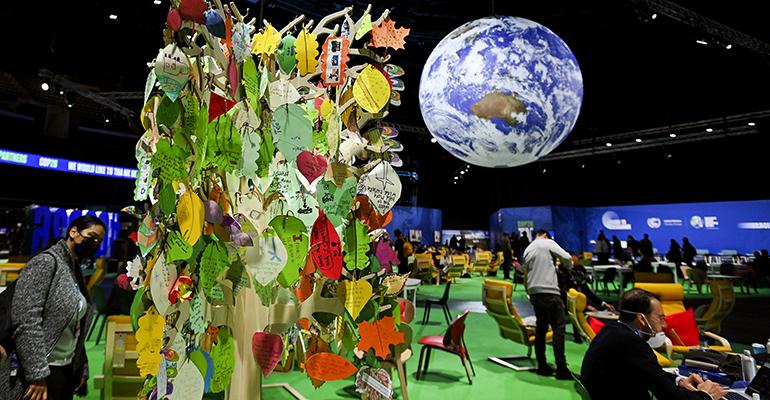 The agriculture industry is known for its contribution to greenhouse gas emissions, but critics say world leaders at COP26 failed to highlight its problems.

No one can have a climate change event without food: People need to eat, and people need to talk about food systems.

The United Nations Climate Change Conference, which ended Thursday, is no exception. We know agriculture and food are responsible for between 30% and 40% of human-caused greenhouse gas emissions. We also know our population is increasing and we must determine how to feed more people, more efficiently.

With so much news coming out of COP26 and surrounding events, it's easy to miss parts of it. Here's a look at some COP26 food-related news.

Watch this panel discussion from the Global Landscapes Forum, hosted by Oatly.

"The most destructive technology in human history is the use of animals to make food," Patrick Brown, CEO of Impossible Foods, said during this Nov. 6 event. Societies can learn from their indigenous people how to maintain biodiversity and create healthy food systems.

"If we got fid of animal agriculture today and continued to grow plant-based products in the same way that they're grown today, we'd still have a broken system," said Ashley Allen, Oatly's chief sustainability officer.

Louise Mabulo, founder of the Cacao Project in the Philippines, said localized solutions to the food system's problems are more practical and economical. Food manufacturers can scale sustainably if they combine local knowledge with modern technologies, she said.

"Regions, states, cities, municipalities, civil society, and communities—that is where the real climate action is being delivered. It was being delivered before now, and it will continue to be delivered regardless of what happens at those global negotiations…and without permission from those national leaders," said Susan Aitken, a Glasgow City councilor.

"The agriculture and food sectors are intertwined with inequalities, and consequently, we need policies which tackle these inequalities. We need to have policies which see things through the lens of inequalities and fighting inequalities," said Audrey Pulver, who serves in the administration of Anne Hidalgo, the mayor of Paris, France.

Corporations' proposals to use hydroponics and cell-based meat won't save humans from climate change, environmentalists with Slow Food said.

"The only approach that can effectively contribute to building a truly sustainable food system is that of agroecology," Slow Food said. Agroecology includes practices such as regenerative agriculture and rewilding. "It should be recognized as a central tool to tackle the multiple crises we face, including the climate crisis. Agroecology is rooted in rebuilding relationships between agriculture and the environment, and between food systems and society."

"One of the events at COP today was about 'Accelerating a just rural transition to sustainable agriculture.' For us, a just transition must be based on biodiversity, agroecology and social justice—and not on techno-fixes," said Marta Messa, director of Slow Food Europe.

Leon Kaye, executive editor of Triple Pundit, empathizes with young activists such as Greta Thunberg who are frustrated that world leaders aren't moving more quickly to combat climate change. After all, they will suffer the most and the longest if nothing changes.

"At the same time, necessity and demand lead to invention and innovation, so what some see as the ashes of COP26 could very well turn out to become gold nuggets for entrepreneurs in the food startup space," he wrote. He argues that plant-based proteins will continue to increase and become more accessible. But cultured meat will have its place in the food system, as well.

"Two huge hurdles lie in this nascent sector's path: regulatory approval and winning acceptance from consumers. The U.S. government is moving slowly on this front; across the pond, things aren't moving much faster," he wrote.

The cow in the room: Why is no one talking about farming at COP26?

"The cow in the room is being ignored at this COP," says Carl Le Blanc of Climate Healers. "Animal agriculture has been taken off the agenda and put on the menu."

Complaints abound regarding the agenda—the conference did not include an agriculture theme day, but finance and energy days were featured—but the food choices aren't much better, critics said. With an estimated 60% of dishes sold at the conference including meat or dairy, the Animal Rebellion activist groups compared the offerings to "serving cigarettes at a lung cancer conference," The Guardian reported.

The debate over eating meat or eating plants continued to rage at COP26, with some arguing that technology can solve the methane emissions problem and U.S. Secretary of Agriculture Thomas Vilsack saying Americans don't need to reduce their meat consumption while we mitigate climate change.

Read more at The Guardian.