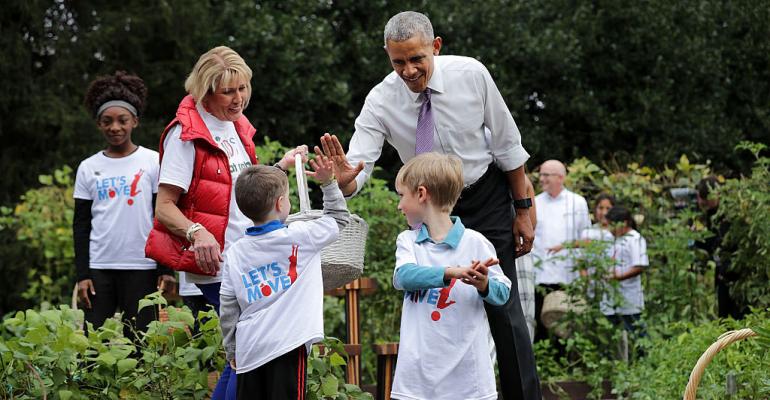 That’s why it was encouraging, or at least refreshing, to see Barack Obama on stage in Milan on May 9, describing how food and politics cannot be viewed separately. Speaking with former White House Chef Sam Kass, a voice for food policy, Obama talked about food waste, the link between meat consumption and global warming, and the appalling inefficiencies built into food production.

We would welcome more conversation, more input, more involvement from a figure whose every utterance will be reported by the media. With that in mind, New Hope Network staff writers offer this wish list for where we’d like to see the former president get involved in food politics:

"If President Obama is going to get involved in food politics, I wish he would tackle food waste. More than 40 percent of the food produced in the U.S. is never eaten, and food represents the single largest component of municipal solid waste reaching landfills and incinerators, not to mention a tremendous economic burden from grower to consumer. I wish Obama would employ his no-drama, straight-forward, cool wisdom to ignite a young generation to focus on solving the epidemic of food waste as the gateway to helping slow global warming, promote sustainable eating, improve healthy food access and counter the dependence on commodity crops."

There is no greater, wonkier policy wonk than Barack Obama. Famously intelligent and famously focused on the details, Obama has the ability to pick through the puzzle of U.S. agricultural policy and see where tweaks and changes can help Americans eat better and help small farmers survive and thrive in a way that helps build local economies. With that ability to divine the ripple effects, Obama could lend his expertise and weight to agricultural reform as Congress prepares to debate the Farm Bill next year. Not everybody has been impressed by Obama’s relationship with Big Ag, but he is no longer raising campaign money or seeking to assuage opposition in the red states. He has the freedom to speak his mind and lead a grassroots response from the sidelines. The food system needs to be rethought from the ground up, and it’s hard to think of a person better equipped to envision and inspire change.

If President Obama is going to get involved in food politics, I wish he would provide startup support for natural food companies dedicated to sourcing ingredients that spark environmental stewardship and lift some of the world’s poorest people out of the tentacles of poverty. Many of the healthiest, most nutrient-dense foods come from rural, underdeveloped countries where farming communities lack basic necessities such as clean water, sewage infrastructure, health resources and schools. But when conscious brands commit to pay a premium to farmer cooperatives that use a portion of profits to improve the community, an economically, socially and environmentally sustainable business is born. Organizations like Fair Trade USA track the positive repercussions of such sourcing. For example, a 2015 report on fair trade coconut sales says that over $800,000 in premium was paid to farmers over one year. Portions of this money built schools, provided micro-loans to community members to invest back into farms and more. Premiums also help cooperatives transition to organic agriculture, launch leadership-training programs for women and spearhead reforestation programs. Donating lifesaving food, medicine and clean water resources is important. But I believe it is more impactful when companies completely dedicated to doing business for good are financially stable—because the livelihoods of hundreds, perhaps thousands, depend on it for long-lasting security.

From an environmental perspective, natural food brands are worthy of financial support because they can also provide incentive for domestic farmers to cultivate novel sustainable crops such as Kernza, a type of wheat developed by The Land Institute that grows well in northern latitudes. Kernza is already gaining interest from brands like Patagonia Provisions and Cascadian Farm for its perenniality—unlike annuals, Kernza isn’t replanted every year, so it doesn’t require plowing or herbicides. Even more exciting, Kernza’s root systems can grow up to 10 feet long, which sequester atmospheric carbon, prevent erosion, nourish the soil and retain clean water. Kernza is a promising part of climate change solution. But its popularity will only rise with good marketing, tasty consumer packaged products and, importantly, steady supply. Manufacturers are integral to Kernza’s success.

Because of these reasons, I advise the Obama Foundation to establish a low-interest investment fund for food startups both in the U.S. and abroad to help more mindful companies devote their buying power to improving the lives of sustainable producers and spearheading smart environmental solutions that reduce dependence on chemical agriculture. Such investments will allow entrepreneurs to make conscious commitments to their farmer partners immediately and the accrued interest can be reinvested back into the foundation for future growth.

In their talk, Mr. Obama mentioned fighting with Michelle about closet space. There’s no mention of his stepping on her toes by entering the food arena. That’s OK, though, because there’s plenty to fix here. I’m pleased by his discussion about the connection between food and climate, but it’s not just about reducing emissions. Let’s look at the opportunity for agriculture to provide a net reduction in atmospheric carbon. And let’s move the meat conversation beyond just eating less meat—though, for now, that’s a heck of an idea—and talk about eating meat that supports grassland restoration through holistic management. There's an incentive opportunity here, too. Let's pay farmers and ranchers for their sequestration services. Let's build policy and business around healthy soils and safe climate. Let's focus on regenerative agriculture.

Financially disadvantaged recipients of SNAP funds (aka, food stamps) can purchase junk food galore, but multivitamins remain on the prohibited purchase list. With Michelle Obama so involved in encouraging healthier food for kids, targeting SNAP money to healthier options would seem a natural focus for the former president. What positive changes in public health would we see if every American had access to even a middling multivitamin! There is a great opportunity right now with the Farm Bill coming up for debate (SNAP is part of the Farm Bill). Obama had to navigate partisan undercurrents as president, but this is not a partisan issue. Good nutrition surely improves a person’s ability to improve their economic situation (getting people off assistance is a goal for both parties, right?). Multivitamins, and not junk food, can be essential to better nutrition, particularly for people who don’t have access to the healthiest food options. Making this change could be a great opportunity for Obama to participate in food politics with tangible and exponential positive effects for the nation.

To take on food politics, I would expect less politicking from our former president. I want to see him truly support natural, organic and non-GMO food. Remember candidate Obama, the one who said "Americans have the right to know what they’re buying?" I would expect him to support this—in true and open transparency—rather than signing off on watered down policy approving stale technology that takes several steps for simple answers. Advance non-GMO and organic policy, please. And that means getting behind policy that helps small producers as well as large, rather than favoring the latter. I would like food policy to be about food policy, not Let’s Move campaigns that, while admirable, shift focus from one of inspiring to placing blame. Let’s support the food movement by moving toward better policy, research and programs that put food first.

What are the best ways for retailers to engage in food and supplement politics?
May 10, 2016

Bittman: U.S. food policy could be as simple as 'the right to fair, green, healthy, affordable food' for all
Dec 03, 2014