The doctor and the comedian: John Oliver savages Dr. Oz and DSHEA (VIDEO) 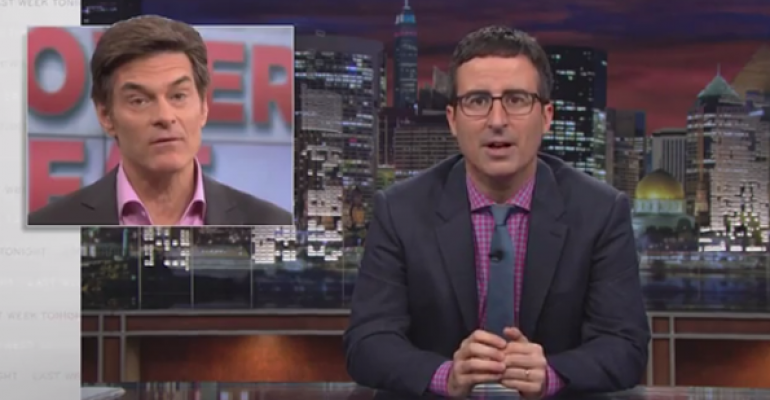 With news gathering splintered into a million tiny slices of pie, there are few media voices that set the agenda outside their news-junkie niche. More and more often, the voices that matter are comedians like Jon Stewart on “The Daily Show” or Stephen Colbert whose show was found by a public policy study to be a better source of information on campaign financing than mainstream media.

Sunday night, supplements came before the increasingly viral voice of John Oliver on his show “Last Week Tonight” and the industry came out the kind of shredded mess rarely seen outside of a jet-powered wood chipper.

Riffing off last week’s Senate smackdown of Dr. Mehmet Oz, Oliver took the whole industry to task. After describing Oz as an “Old West traveling salesman” selling a concoction of “a monkey’s paw mixed with five petals of a rose and a thimble full of otter semen,” Oliver goes on to describe the supplement industry as “shockingly unregulated” with the entire segment going on for a mammoth 16 minutes.

With the exception of disappearing Malaysian airliners, nothing gets 16 minutes on mainstream news. But Oliver, Daily and Colbert is the news for millennials and millions of others. Sunday night they got educated on the origin of DSHEA, the spotty regulatory partnership between the FTC and the FDA, industry lobbying and more than they probably wanted to know about Cameron Diaz’s lower GI tract.

Are industry executives watching? Maybe. Are they doing something meaningful about it? Not enough. With Dr. Oz’s disastrous senate appearance last week, an endless assault on supplements from an ultra-skeptical media and now late night TV comedians emerging as the thought leaders in the debate, it’s time to grow up, and grow up fast.

If industry isn’t seeing this moment as the pivotal pain point it is, they aren’t paying attention and we need to ask “what would it take?” If they don’t start demanding regulation—from pre-market registration to lab-test transparency, just to start—they could end up with regulation they don’t like. Senators Orrin Hatch and Tom Harkin, both savaged as sell-outs in Oliver’s piece, are retiring. There’s no obvious industry champion waiting and it’s unclear if any lawmakers want to end up in the sights of satirists like Oliver, Colbert and Stewart.

There is no Walter Cronkite in 2014. Millions more millennials probably saw NBC’s Brian Williams rapping “Baby Got Back” in the viral YouTube mashup than have ever sat through the nightly newscast he anchors. The rap clip has 4.3 million views on YouTube at the moment. That’s more than twice the number of viewers he gets on average in the 24-54 uber demo.

Sales are still growing in supplements but millions of people are getting far more negative headlines than positive. Perhaps worse than that, they are getting ridiculed by the comic voices that more and more have come to matter.

If the industry doesn’t work hard to clean up its act and make regulation part of that, the up-and-coming consumers will see nothing but what the comedians describe: a parade of charlatans and shenanigans, snake oil and lies.

Get more of today's top news

Check [email protected] at newhope360.com each day for the 5 natural news stories you need to know. So far this week: Will Walmart change organic? What shoppers don't know about biotech and more.