The doctor and the senator: Dr. Oz gets a turn in the hot seat 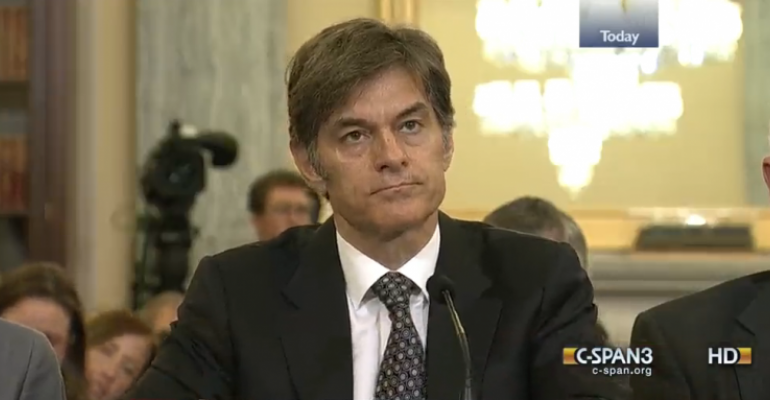 But she might as well have been. The June 17 hearing on “Protecting Consumers from False and Deceptive Advertising of Weight-Loss Products,” wasn’t so much a hearing as a lecture. “America’s Doctor” didn’t squirm but he didn’t look comfortable either.

We watched it on a Senate website. The tone was obvious right from the gavel.  She attacked the diet scam industry in general but she was there to talk to the doctor. “I have some tough questions for you today,” she said.

And then it got good.

To save you some time, we offer this fast forward play-by-play on the McCaskill/Oz exchange:

00:39 Reading from his prepared statement, Oz pledges to do what he can to “Douse the flames of this uncontrolled wildfire.”

00:40 Really. He’s serious about it. “I am encouraged that the U.S. Senate has chosen to prioritize this criminal enterprise.”

00:41 It’s not easy being America’s Doctor! “I am forced to defend my reputation every single day.”

00:41 But he’s not making it easy either. “I accept the responsibility for this, that the passionate language I used to describe these products was used as fodder for these unethical advertisements.”

00:43 Maybe “miracle” was an overstatement. “I will almost always present the fact that these are crutches that are designed for short-term supplementation … You won’t get there without diet and exercise.”

00:43 But “shameless series of perpetrators?” Maybe Oz and McCaskill have different definitions for “perpetrator.”

00:43 Effectively and profitably get confused sometimes. “If the only message I gave was to eat less and move more, which is the most important thing people need to do, we wouldn’t be very effectively be tackling this complex challenge.”

00:44 And now the intrigue. “I would rather have a conversation on my stage than in back alleys."

00:45. Even better intrigue. The doctor proposes “a private sector-funded bounty” on shady supplement companies. Get the posse together Sheriff Oz!

The other witnesses read their statements but they’re extras in the action scene. They don’t have TV shows.

Round two, the good stuff

01:08 We’re back. McCaskill has the microphone. Oz might as well be the only other person in the room.

01:08. The senator reads off a triptych of statements the doctor made on his show. She starts with "You may think magic is make-believe, but this little bean has scientists saying they've found the magic weight loss cure for every body type. It's green coffee extract" and follows it with "I've got the number one miracle in a bottle to burn your fat. It's raspberry ketone,” and "Garcinia cambogia: It may be the simple solution you've been looking for to bust your body fat for good.

01:09 Her look is stern. She is not a fan. “You're very talented and you're obviously very bright. You've been trained in science-based medicine ... I don't get why you need to say this stuff when you know it's not true."

01:09 She’s not done “Why would you cheapen your show by saying things like that.”

01:09 Oz brought some papers. He waves them. “This is a product that has several clinical trials.”

01:09 It sounds like McCaskill is going after ketones. Oz was talking about the coffee beans. It doesn’t matter. She’s not buying it. “The only study that was out there was the one that was 16 people, that was written by a person who was being paid by the company that was producing it.”

1:10 Oz pivots away from Ketones. You know, low-fat diets didn’t work either. It’s not just garcinia cambogia. Weight loss is hard.  “It is remarkably complex to figure out what works for most people in a dietary program.”

01:11 Oz talks about giving coffee bean pills to his audience. He actually uses the word “trial.”

01:11 McCaskill is not impressed. “The trial you did, you would never say it would pass scientific  muster.” It’s kind of a question. But not really.

01:11 Oz appeal to a higher power. No. Not Oprah. “I’ve been criticized for having people come on my show to talk about the power of prayer."

01:12 Hope! That’s it! “I actually do personally believe in the items that I talk about on my show. I passionately study them.”

01:12 Maybe “passionately” is too strong of a word. “I recognize that they often don’t have the scientific muster to present as fact.”

01:12 OK. So it’s not “passionately” but is there a word for “I have given my family these products, specifically the ones you mentioned and I am comfortable with that?”

01:13 TV is not the real world. “In an attempt to engage viewers, I used flowery language. I used language that was very passionate but it ended up not being helpful.”

01:14 That clip, the magic beans one? That’s ancient history. It’s “2 years old and I’ve hundreds of segments since then.”

01:14 He’s a different doctor now. It’s, like, a different show. There’s a product he feels “strongly about” but he’s holding back “because I know what would happen.”

01:14 The camera is back on McCaskill. The high school principal stare is back too. “I’m surprised that you’re defending (the products),” she says. “The scientific community is almost monolithically against you in terms of the efficacy of the three product that you called miracles.”

01:14 These aren’t really “tough questions.” They’re tough statements. The gloves didn’t come off. They were never on in the first place. “I just don’t understand why you needed to go there.”

1:15 The lecture continues. “I understand that you are in the business of getting viewers,” she tells him.

01:15 Freudian slip, or just poor choice of words? “Senator McCaskill, I know the seven, I say those things on my show all the time.”

01:15 Yeah! The tough questions! “Then why would you say that something is a miracle in a bottle?"

01:16 Cheerleading. Hope. It’s not a show. It’s a calling. “It jump starts you and gives you confidence to keep going.”

01:16 McCaskill has checked off her talking points. She got what she came for. She’s ready to pass the mic to her colleagues but she has one more shot. “I will just tell you that I know you feel you are a victim but sometimes conduct invites being a victim and I think that if you would be more careful about that maybe you wouldn’t be victimized quite as frequently.”

01:17 Oz offers his last words. They’re not as defensive. They’re not exactly apologetic either. “Taking away those words doesn’t change what’s already happened.”

01:17 The camera moves to Sen. John Thune (R-South Dakota). Thune doesn’t look to NPA CEO Dan Fabricant or Engle or any of the other three witnesses who don’t have TV shows. He turns to Oz, “You’re the popular person on the witness stand today, I guess …”